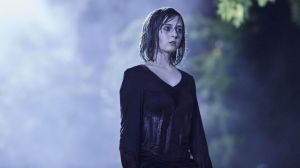 The “Pilot Episode” of a new series is a commonly used term for a prototype episode of a new concept, filmed to test out its potential.  So here we are at the “pilot” of a brand new series, in which a human discovers an old man in an ordinary location in Britain, and finds out that he is actually an alien who fights monsters and travels around in a magic box.  I wonder if that could be a success…

The only thing is, this series is actually 53 years old and has shown us this starting point many times over.  OK, I’m being a bit silly here because the title actually refers to the plot of the episode, but doubtless it was chosen with a bit of irony in mind, and also in acknowledgement that this is a jumping on point, as is the start of any series with either a new Doctor or a new companion.

So once again here we are seeing the Doctor through the eyes of a new companion, and that has literally always been a good idea, with no exceptions that I can think of.  It works especially well if the companion is one of the best, and that applies to Bill right from the outset.  I have to admit to being a bit in trepidation of the new companion this time round, and that was because of the trailer for this episode, which was awful.  In fact, the trailers and next time teasers for this whole series were almost universally ill-thought out, but this one was especially foolish.  It seemed like somebody had chosen the only isolated moments in the episode where Bill could possibly come across as an annoying character and then stitched them all together.  So for her first view of the TARDIS we got her saying it looks like a kitchen.  That was the clip that somebody chose to put in the trailer, not the fabulously acted moment only seconds before where she first stepped into the TARDIS and reacted with awe.  Luckily the trailer was a complete mis-representation of the episode and Bill is in fact a brilliant companion right from the outset, remaining so for the whole series – one of the best.

But this episode gives us two of the very best companions for the price of one, because Nardole is back too.  He is under-used in this episode and indeed in the series as a whole, which becomes increasingly frustrating over the course of the first few episodes in particular, presumably something to do with Matt Lucas only becoming available for the whole series late in the day, or something like that.  Whatever the reason, it’s a shame, because Nardole is fabulous.

Right off the bat, Bill has a love interest, who just happens to be a puddle.  It’s all great fun and quite creepy at times, particularly the scene set on the alien planet which is both stunning visually and a good make-the-viewer-jump moment.  The means of Bill’s eventual departure is pretty clearly signposted here, and relies on the viewer forgetting about it over the course of the next eleven episodes.  All the water stuff is a bit derivative of “The Waters of Mars”, in the first of a large number of moments throughout the series that are perhaps a little too close to what has been done before for comfort.

But all in all this is a really enjoyable episode, and feels like proper enjoyable feel-good Doctor Who for the first time since Matt Smith left.  That’s not to say there were not great episodes before this during the Capaldi era (a few were phenomenal), but, well, it felt a bit off for the most part up until this point.  Like a series not quite understanding what Doctor Who actually is.  Often a bit too dark, often not much fun, often a series that excluded the younger element of the “family viewing” remit.  I finished this episode with greater optimism than anything since certainly the Matt Smith era, and perhaps even the David Tennant episodes, and the rest of the series rarely disappointed.  So this “Pilot” really was a fresh start for Doctor Who.  In the twilight moments of a showrunner and a Doctor, that’s a stunning achievement.   RP

When I was a kid, I watched The Greatest American Hero; a silly, action comedy superhero show about a goofy guy who has super powers courtesy of a suit given to him by aliens.  I remember an episode (The Hit Car, I think) where a car is dropped on Ralph, our titular hero.  He is crushed!  His friends look on in horror realizing they are about to be killed by the very hitmen who dropped the car on Ralph…. Briefly, the car makes a noise.  A slight creak… and then it gets lifted and thrown by Ralph and the good guys win the day…   yay!

Hell Bent dropped a car on Doctor Who.  Most of the 9th season contributed, but the finale was the crushing blow.   Peter Capaldi’s second season finale killed the show for many of my friends.  It was idiotic; I’ll save that review for another day.  But it would have marked the death knell for a show without 50+ years of history.  Then came the Christmas special: The Return of Doctor Mysterio.  It was the creak from the car – a great episode but it ran the likelihood of being little more than a creak.  One could only hope…

With that, The Pilot comes to our screens…. and the car is thrown off the Doctor and the good guys win the day.  YAY!

The previews for The Pilot did nothing for it.  Pearl Mackie’s Bill is depicted as an idiot comparing the TARDIS to a kitchen and asking to use the toilet.  The reality is that Pearl Mackie is utterly wonderful.  Even her kitchen line takes shape as she explains herself.  Her most wonderful moment though comes from her seeing the TARDIS for the first time – the music is perfect as she stares in awe, trying to take in all that she sees.  Her shock at the Doctor’s promise of safety, “Is it made of wood?!” is both hilarious and brilliant.  Her recognition that the TARDIS actually moves is classic.  Pearl is an amazingly great companion; one of the best!

We are also reintroduced to Matt Lucas’s Nardole.  Sadly underutilized but utterly awesome.  It’s so easy to laugh out loud with his joy about losing their pursuing enemy through fire only to learn that they too must go through fire (“Less good now!”).   And when Bill finally does notice that the TARDIS is bigger on the inside than the outside, his congratulatory handshake with the Doctor is palpable!   He will be a great addition to the crew!

Peter Capaldi though deserves recognition.  Gone is the fake Doctor of Hell Bent and we have more of the teacher, the wonderful man who is so full of mystery and wonder… Bill will get to experience life anew with him.  And in what might be a foreshadowing to the finale, his speech about the TARDIS… “It means LIFE” …. was so heartfelt and wonderful.  Capaldi is old and young, crotchety and funny, mysterious and kind.  This episode brings back the Doctor we all want to emulate!  The hero that kept the show alive for 53 years!  And he does it brilliantly!

But the story has one major flaw.  The “villain” of the piece is not a villain at all, but a puddle of oil left behind by a spaceship.  Ok, that on its own is a classic Doctor Who style monster.  But here’s the thing: that puddle can instantly flash across the universe and needs a body to “pilot” (hence the title).  The obvious questions should be:

1) what race created this technology?  How much more power do they possess?
2) why would they need a spaceship at all?  If the oil does it all on its own, what need is there for a ship?
3) We will learn about this later, but the puddle can basically manipulate matter “easily”…. so again, what race used this puddle as fuel?  I’ll wager we will never know!

Overall, a great episode.  10/10!  There are  homages to the past: River and Susan and mysteries for the future: The Vault.  Doctor Who has not forgotten where it came from but has an eye set on horizons anew.

Welcome back, proper Doctor Who!   ML

Read next in the Junkyard… Smile

2 Responses to The Pilot