It is difficult to get a true impression of a mostly missing story from one existing episode and the soundtracks.  The lack of telesnaps makes it all the more difficult, with reconstruction attempts so far being worse than nothing.  Up until a few years ago we were in a similar situation with both The Enemy of the World and The Web of Fear, although both had telesnaps, but the subsequent recovery of virtually all of both those stories really brought home how easy it is to misjudge a story from one existing episode.  Because Web 1 was the best of the 6, and Enemy 3 was the worst of the 6, from each respective story.  With Space Pirates I think we may be in something of an Enemy of the World scenario, because judging by the soundtrack this is about as dull as the story ever gets.

Having said that, there are some things we can understand, without the visuals.  Firstly, this is only the second script from the great Robert Holmes, and at this stage he doesn’t quite know how to write Doctor Who yet.  Oddly, just two stories later he would hit the nail on the head with Spearhead from Space, but this is all over the place, at least for the first three episodes, with some of the dodgiest story structuring so far.  For example, we are 15 minutes into the first episode before the TARDIS even arrives, and we are into the third episode before the regulars have any conversation with another character.  All of which equals boredom, unless the story and guest cast are utterly brilliant, which they aren’t.  The second half of the story is far better, so this could really have done with being a four episode effort rather than dragged out.  I would love to be able to see the last two or three episodes because the soundtracks are much more entertaining and I think it would revive the story’s reputation at least to some extent.

The concept of a western set in space is an interesting idea.  The western theme has its greatest success in the character of Milo Clancey, played with great charisma by Gordon Gostelow.  Unfortunately General Hermack and his crew  are uniformly wooden, with obviously faked accents.  We are also given a very clichéd view of the future, complete with a hefty old telly with a curved screen, a reel-to-reel tape machine and lots of flashing lights, but no stars in space.  And then of course we have the obligatory groovy future headgear: 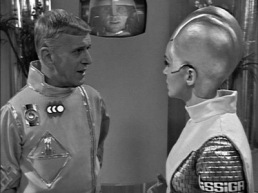 We also have a rather hackneyed Charlie’s Angels style conclusion, one of those horrible scenes that used to blight drama programmes where the cast all fall about laughing, just to make for a supposedly happy ending.

But it has its moments.  Patrick Troughton is as good as ever, and Robert Holmes perfectly captures the characterisation of the Doctor. His comment that he carries drawing pins around just because he likes them is a very Doctor-ish thing to say, and there are many similar moments of humour.  Amongst the wonderfully funny dialogue between the Doctor and his companions is an example of the continuing one-upmanship between Zoe and the Doctor: ‘yes, as you say, a simple calculation. I should have thought of that myself.’ (The Doctor) ‘Yes, I wonder why you didn’t.’ (Zoe)  In a lovely example of continuity of characterisation, Zoe doesn’t know how a candle works, because she is from the future.

My favourite moment, though, comes in the one existing episode.  Hermack dispenses himself two pretend cups of coffee (nothing comes out of the machine)! Warne then dutifully drinks from the empty cup: something of a metaphor for the budget at this stage.

Now I’m off to make myself some coffee. With no water, milk or sugar. Or coffee.   RP

In my senior year of High School, there was a Halloween party.  This would have been October of 1989, just 4 months after Batman premiered with Jack Nicholson as the Joker.  Unsurprisingly, there were many clown princes of crime.  The attire was surprisingly easy to come by and many people looked the part!  One guy, however, forgot a critical part of the makeup.  He left off the smile!  It’s a fairly distinguishing feature on the Joker; to forget it was a fashion faux pas! 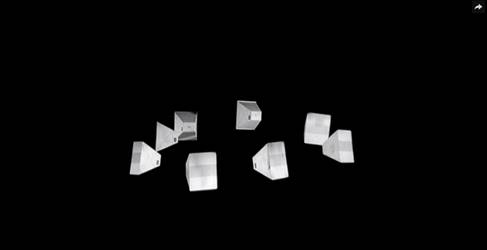 There is a sense of humor about the sole episode.  Watching Milo Clancey try to eat his breakfast as one thing after another distracts him is comical.  Unfortunately, Milo rapidly develops into a whiny character the moment he gets on board the General’s ship.  And he says “newfangled” far too often.   However, I did laugh out loud when he asked if it was ok to blow his nose!

Ian Warne mentions that Milo has no respect for the “lore” (clearly meaning “law”).  He also wears a collar that prohibits shrugging, as two sharp points stick noticeably over the collar ready to jab him should he be unsure of anything!  Must be a militant group!  Later, he seems to be wearing a slightly modified Ice Warrior helmet!

General Hermack is a very loud fellow.  When he is contacted by Warne, Hermack says “Something must be happening!  He’s not due to report!”  Yeah, here’s an idea: let Warne speak and you’ll find out.

Sadly that quote sums up the story: something must be happening, we just don’t have enough of the story to find out if it’s any good.   Beyond another Doctor Who experiment, this time with the space western, we don’t have enough to really assess its merits.  That music in all its operatic weirdness… fits the episode.  Again, not something to be overused, but it worked well with this strange episode.

What we do have to be happy with are the scenes with the Doctor, Jamie and Zoe.  Robert Holmes (who eventually becomes the writer of the Golden Era of Doctor Who) does a great job giving us a tense view of being in a very cramped pod drifting in space without any oxygen.  When the Doctor looks out some unseen window and explains their predicament, that starless space seems even creepier; a true void.

And let’s not forget that Doctor Who was a show meant to educate.  In this, the Doctor explains magnetism.  It’s a brief explanation and it helps push along the story.  When Zoe realizes the danger if he gets it wrong, the Doctor slowly says “Zoe, don’t be such a pessimist”.  When things do indeed go wrong, the starless void is terrifying as the pod rockets away from the rest of the ship.  (This should have been the cliffhanger because it does prove far more unnerving than seeing Jamie shot!)

Patrick Troughton is, as always, wonderful.  You simply can’t say enough about how great he was as The Doctor.  Frazer Hines is still the best male companion to ever travel in the TARDIS (with Ian a very close second), and he’s a wonderfully nice man in person.  Wendy Padbury’s Zoe was great because she was an intelligent companion, often rivaling the Doctor.  She might not understand everything (which is good since that’s the point of the companion) but she was totally atypical of the female companions of the time.  I’ve said it before: they were the ultimate trio!

Regarding Zoe: what boggles my mind is that growing up, I read a lot about the early days of Doctor Who.  It was always said that Louise Jameson’s Leela was brought on for “sex appeal for the dads”.  Perhaps nerdy was sexy back then, because I much preferred Zoe.  She was better looking, far sexier and intelligent.  (No offense Louise; Leela was meant to be a savage!)

As the pod goes flying off in space, Frazer attempts to be sexier in a skirt than Wendy in her… whatever that is.

For the record, I was not the guy who forgot the Joker’s smile!   ML

Read next in the Junkyard… The War Games