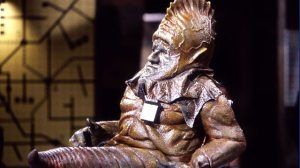 After two dodgy scripts, Colin Baker at last gets one that shows some promise. There are some interesting ideas here, which tackle contemporary issues, chiefly the glorification of violence on television, and also the burden of leadership. Such is the unflinching portrayal of its subject matter that at times the tone of Vengeance on Varos becomes unremittingly grim, not helped by the grisly dialogue. The Doctor comes across as uncharacteristically violent in this story, taking pleasure in killing his enemies when other alternatives could have been found and getting what he wants by threatening people with a gun. To be fair, his life is in danger and Peri’s life is also on the line, but a clever script can include that type of jeopardy and still have the Doctor using his brainpower to find better ways out of danger than physical violence and threats.

And although the ideas behind Vengeance on Varos are sound, the execution of those ideas is at times very 1980s.  Firstly we have the costume design, with everyone on Varos wearing clothes with a letter “V” on them.  Let’s think about that for a minute. That’s like everyone on our planet wearing clothes with an ‘E’ on them. Every single person.  There are fashion crazes, and then there’s Varos.  Sometimes the reality tv nature of the plot, with everyone watching what is going on, makes the action on screen nonsensical from a story point of view, such as the guards who have great difficulty tracking down the Doctor in part one, when all the viewing public can see him on their screens.  Why don’t they just look at a television?  The messages Sil receives from Thoros Beta make no sense. At first they agree to invade, then they say they have found Zyton 7 on an asteroid so they don’t need to invade, and then they tell Sil to pay any price because they are desperate for Zyton 7 – so why call off the invasion?

Vengeance does benefit from an excellent guest cast, especially Martin Jarvis as the Governor and Nicholas Chagrin as Quillam. By far the best performance, though, is given by Nabil Shaban who is perfectly cast as Sil. The voice is spot on for the character, and his gurgling laugh is wonderful. His vanity despite his extreme repugnance is a nice touch, and Sil is easily the best original creation to come out of the Sixth Doctor’s era. Another inspired aspect of the plot is the running commentary from the audience, in the shape of Arak and Etta, and their final scene is a great moment. Vengeance on Varos is too dark in tone to appeal to everyone, but is a bold experiment. It was ahead of its time, showing the ultimate extremes of reality television, long before there was really any such thing.  But these are analytical, intellectual conclusions.  Yes, it is very impressive that Doctor Who was able to foreshadow the dominance of reality tv long before it happened, but does that make it enjoyable viewing?

Is it in fact right for Doctor Who to tackle these kinds of themes?  Are we still in the realms of a family show, or are the young viewers being excluded?  I certainly felt excluded at the time, and was watching The A Team instead!

The sequence with the guard falling into the acid bath in Part Two has caused a lot of controversy because of the misconception that the Doctor kills him. In fact he is pulled in by the other guard who has already fallen in – the Doctor just defends himself. However, he does have that James Bond-style quip: ‘you’ll forgive me if I don’t join you.’ Critics of the story have condemned the line as too flippant, when the Doctor should be regretful of what has just happened. On the other hand, you could look upon it as an attempt to defuse a nasty situation with some humour. Perhaps more deserving of criticism is the Doctor setting a trap to kill a guard in Part One.  But what makes Vengeance on Varos seem so nasty is the dialogue rather than what happens: ‘sever his neck from his spinal column’; ‘ultimately their blood must gush and flow along the gutters of Varos’.

So this still feels a bit wrong.  We haven’t quite recovered from the loss of the Fifth Doctor yet.  The Doctor still doesn’t seem quite like the Doctor.  He is frustratingly defeatist about his predicament in Part One, which goes against everything we know about him.

“When did they last show something worth watching?”  It is really sad to say it, but at this point the answer to that question is still The Caves of Androzani.  Luckily there were better things on the horizon…   RP

Let me take a moment to go back in time to explain my Doctor Who viewing youth.  Channel 9, WOR, in NY/NJ had been showing Tom Baker’s Doctor for some time, but it seemed to go from Robot to The Talons of Weng Chiang.  I had viewed this run many a couple times at least; they were near perfect stories.  After Talons, it recycled until it stopped being shown altogether.  Then, one fantastic Saturday night some time later, a friend called and told me to put on channel 50, a UHF station, WNJN.  (God only knows how he found it!)  He knew it was Doctor Who, but didn’t see the Doctor, only the TARDIS.  I tuned in to Peter Davison in Mawdryn Undead.  I was hooked all over again.  But at the time, WNJN didn’t air The Five Doctors so I still didn’t know about regeneration.  I watched Davison until he “died” in Caves of Andrazoni and finally saw my first regeneration.  Good God was I hooked!  I couldn’t wait for the following week.  Colin had just sat up and said his first words…. what was it going to be like next week?  I COULD NOT WAIT!

The following week opened with a man falling out of the TARDIS into the grass.  Peri was missing without explanation.  The Doctor looks decidedly different from what I remembered from the week before.  But I was watching on a UHF channel… the image was mediocre.  This was before cable.  What happened?  Was the image really that bad????

What actually happened was that WNJN didn’t have license rights to Colin’s era yet as it had just started.  So rather than show The Twin Dilimma they went back to the Pertwee Era with Spearhead from Space.  Deeply confused at the time, I watched anyway, growing increasingly intrigued by and aware of who, and what, the Doctor was.

By the time of my viewing of Vengeance on Varos, I had grown very familiar with the Doctor.  This was a man of peace, intellect and often, humor.  But the show itself had changed a lot since the early days.  Now television Science Fiction liked to do commentaries, rather than just tell stories.  And that’s a good thing!  SF should always give us a chance to examine ourselves.  But Vengeance hit close to home!  This story is not about the man of peace, intellect or humor.  It’s basically Inception, telling the story of a show within a show.

But Doctor Who proves over and over again that it can do what other shows can’t: it can experiment.  I’ve said this time and again, and it’s very evident here.  We are given a taste of how the viewers saw TV through the eyes of those on Varos.  Watching the “mindless violence” that was the very essence of Doctor Who at the time.  The criticism of the Doctor being aloof when people died, for me, was more an attempt to add humor to a scary scene for the kids, but ultimately it still gave the mindless violence more to work with in the context of the episode.  We were watching a violent show about people watching a violent show.  Inception!  Or perhaps Edgar Allen Poe’s “Dream within a Dream”.

And it was helped by Sil.  Sil is a vile little creature given the most diabolical laugh by the superb Nabil Shaban.  He is despicable and makes a great enemy.  He’s gross and completely amoral.   Forget that the dialog doesn’t make a lot of sense with the Zyton-7, because that’s not what the story is about.  It’s meant as an experiment about TV viewing of the time.  And while it might not be Colin’s best work, the story bears viewing because it gives us a chance to partake in an experiment that is almost surreal in the viewing.

Read next in the Junkyard… The Mark of The Rani

1 Response to Vengeance on Varos