The First Doctor Who Annual 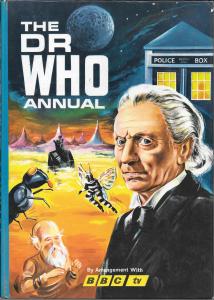 So, here we have it, a milestone in Doctor Who publishing history: the first ever Doctor Who Annual (published 1965). There were not a great deal of stories as a point of reference, so the first offering, The Lair of the Zarbi Supremo, predictably provides a sequel to one of the more memorable monster adventures at the time, The Web Planet; it is a short story, and is well illustrated.

Next up is Who is Dr Who?, a short explanation of the character that is a nice reminder of how little had been established at the time. He is described as ‘mostly very gentle and kind-hearted and he has the utmost respect for life of any kind…A planet in our galaxy would seem to have been his original home, but he has journeyed so many millions of miles…that perhaps even the good doctor himself does not remember his origins’.

The Sons of the Crab is a rather odd story, and is followed by another homage to The Web Planet, The Lost Ones. We are then treated to a simple board game, and then an attempt to rationalise the workings of the ‘Tardis’, in The Equations of Dr Who. This offers some more crackpot theories, and explains that ‘When he built his Tardis, Dr Who well knew that its journeys must be in Time as well as in Space…The Tardis can travel to a far-distant galaxy in an instant by transferring its atoms, loosely patterned, out of our normal material Space-Time sphere, directly to the other Space-Time sphere Dr Who has selected’.

The Monsters from Earth is an entertaining little giant spiders story, although Peril in Mechanistria is rather less fun. The Fish Men of Kandalinga is much more enjoyable, and features the return of the Voord. Children certainly got plenty to read for their money, and this first effort would have passed a happy Boxing Day in 1965.   RP