Genesis of the Daleks 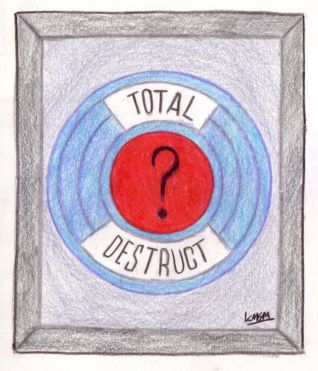 So here we are, at the start of the Time War.  OK, that’s not quite the whole truth because an episode in the Big Finish Gallifrey series explores the motivations behind sending the Doctor on his mission, and also it’s a whole lot of retrospective continuity, but nonetheless this is a very significant moment in Doctor Who because it is the moment the Time Lords go too far.  They have never exactly been the good guys, starting off as basically the Doctor’s enemies in The War Games, and since then they have been meddlers who say they don’t meddle.  Here is our greatest indication that their non-intervention is a charade.  This is what makes the Time Lords such an interesting parallel with politicians, or at least some of the worst that politics has to offer, because they talk a good talk about not getting involved and then try to bend things to their own preferences in a most fundamental way.  And in Genesis of the Daleks the Time Lords flip a coin on the fate of the universe and lose the bet.  By sending the Doctor back to destroy the Daleks they have two possible outcomes:

(1) He succeeds.  The Daleks cease to exist.  This is not wholly a good thing for reasons the Doctor explains in the story, but it’s the outcome they are looking for, because the alternative is what they get:
(2) He fails (or rather refuses to do the deed).  And then the Daleks retaliate.  We don’t hear much about this retaliation until Rose, but it happens nonetheless.  It just took a genius showrunner to realise what would naturally have flowed from this story.

And knowing the kind of man the Doctor is, how could they really have hoped for anything better than the second of those two outcomes.  So this is also the story that establishes beyond a doubt that the Time Lords are fools.  The problem is they are fools with a lot of power, and that’s a troublesome combination.

Apparently Terry Nation offered Terrance Dicks a script that was basically another rewrite of his usual themes.  We have had several mashups of his usual favourite themes over the years: deadly plants, invisibility, Daleks chasing the Doctor through time, Daleks vs Thals, etc, etc.  I don’t know what was included in his original, but there is no doubt that Dicks showed his usual stroke of genius by sending him off to have another go with the brief to write a genesis story.  Nation tackles some thorny issues for once (and no, Varga plants don’t count as thorny issues), and his story is concerned with survival at any cost, even if it means mutation into something horrific. The Doctor has the option of genocide (another wonderful speech) and turns it down, which is all the more amazing when you consider that he has just almost been strangled to death by some Dalek mutants. It says something about his character that he is so unwilling to take such drastic action, although it is debatable whether his motivation is for doing the right thing or avoiding having something nasty on his conscience.  This failure to do the big deeds will be returned to in the whole Time War story arc.  Sarah acts as the voice of the viewer here, attempting to persuade the Doctor to take some decisive action. It is a moment that really divides the viewers into those who are impressed with the Doctor’s moral standpoint, and those who are irritated by his indecision. His willingness later in the story to go and finish the job undermines the moment, and he does finish the job, albeit by proxy. Nonetheless, he and he alone reconnects those explosives.  It’s an aspect of Genesis that is wide open for debate, and a story that raises has these grey areas is one that has done its job well.

Then there is the exchange between the Doctor and Davros concerning a hypothetical deadly virus; Davros’s response to the Doctor’s question is absolutely chilling, and reveals just how far he is prepared to go in the quest for power. Michael Wisher does a remarkable job in scenes such as this, veering from human to Dalek-like speech as he gets more and more animated. Considering that he is concealed behind a fairly inexpressive mask, and his voice is the only tool available to get the characterisation across, the results are absolutely incredible.

Michael Wisher gives one of several memorable performances. Peter Miles would have stolen the show as Nyder in any other story, and Guy Siner achieves greatness with the disappointingly short-lived Ravon. The characters are made all the more interesting by the sheer amount of plotting and double-crossing, and that is what really justifies the six-part length; there is remarkably little padding, but a couple of the cliffhangers are rather contrived, and could have been stronger. David Maloney does wonders with the direction, even managing to make a quarry look convincingly alien for once. Like The Ark in Space, Genesis of the Daleks is a taste of what we can expect over the next couple of years, from the leadership of Philip Hinchcliffe. It is darker, more adult, and wonderfully stylish.

But this is not quite the best that Doctor Who has to offer, in my opinion.  It is riddled with mistakes, the worst of which is probably when Sarah falls outside the scaffolding but lands inside it – a very clever trick!  Then we have the scripts themselves which at times could have used another rewrite.  How does destroying the tape solve the problem of what the Doctor has told Davros? Does the Doctor think Davros’s memory will be so bad that he will not remember any of what the Doctor has said?  Why does Nyder co-operate with the Doctor and open the safe? It is not as if Sarah, Harry and the Doctor pose much of a physical threat to him (or indeed are threatening him at all) and he is a highly trained, ruthless military man.  Then we have a war that has been waging for a thousand years, despite the fact that the two opposing forces are within walking distance of each other and can sneak into each other’s domes quite easily.

But I can understand why for some people Genesis of the Daleks is the greatest of them all… and you’ve gotta love that big red button that says TOTAL DESTRUCT in big letters. Every Doctor Who story should have one of those.   RP

I remember the start of my time with the Doctor with varying degrees of clarity but one image that stands out during those early days is a scene from Genesis of the Daleks.  The Doctor is in an incubation chamber connecting wires but is taking too long…  Sarah is calling out to him when the door bursts open, and she looks on in terror as the Doctor struggles with a creature at his throat… and the closing music begins.  I had to wait a week to see what would happen next!  Of course it would embed itself in my memory!

Genesis of the Daleks is an absolute classic.  For a start, we are introduced to the creator of the Daleks.  Suddenly, this alien enemy is given a backstory that’s almost tragic: a war that has waged for far too long has led to the creation of personalized tanks.  We don’t know what disfigured Davros so badly, but one can only assume it has to do with the war.  Davros makes a great villain; his virus speech is terrifying and glorious in equal measure.  His megalomania is overwhelming.  And his henchmen, Nyder, is a loathsome, despicable character.  The Kaleds are depicted as Nazis which gives added meaning to the Dalek war cry of “exterminate”.   It is an excellent introduction for a race that has been around for more than a decade by the time this episode aired.  And, although we won’t learn more about it until 2005, when Doctor Who rebooted, it’s very possibly the start of the Time War.  And what’s more upsetting for the Doctor is that his own people, the Time Lords, started it by sending him on this very mission!

Roger coverage of this episode sums it up wonderfully.  I have little to add, however, since my first viewing of it, I’ve become a parent.  As a parent, one has to be discriminating in what we allow our children to watch.  Mary Whitehouse famously blasted Doctor Who for being too violent but I’d argue that it’s pretend violence, as opposed to the omnipresent news broadcasts we hear every day.  And if there ever were a case in favor of Doctor Who, it could be made with this story.  For one, the obvious parallels with World War II, the Nazi’s and the horrors of war are all great learning tools.  An allegory bordering on a history class, this episode does a very good job teaching through its depiction of the evil that people do without having to be “the real world”.  Furthermore, and perhaps more importantly, there’s the scene that crystalizes who the Doctor is when he debates whether or not he has the right to destroy the Daleks.  His argument, that there could be good because of the Daleks’ evil, is at the core of the moral compass the Doctor travels by.  Unwilling to be like his enemy, to become the monster he fights with, he does not press the cables together.  He rises above them.  And it is an enormous boon to his conscience.

Baker is, as usual, amazing, wonderful, fun to watch.  Sarah Jane, the best companion, is the audience.  The entire cast works to make this episode the magnificent piece of television history that it is.  There are a number of memorable moments but perhaps right up there with the best of them is the Daleks’ promise toward the end of the episode that they will emerge, grow stronger and eventually conquer the universe.

The Daleks have given us several memorable moments over the years with this episode at the top of their list.  I guess the Doctor was right again…

Out of all their evil, must come something good!   ML

Read next in the Junkyard… Revenge of the Cybermen

6 Responses to Genesis of the Daleks