Doctor Who and Amstrad

I was lucky enough to be born into just the right era to experience the birth of home computing in Britain.  My older sisters had already played some very simple computer games – the kinds of things you loaded onto your television and had a bat each and a ball, all made up of a couple of pixels.  We’re talking very basic here.  By the mid 80s, schools were starting to have basic computers (the BBC Micro), and then in 1985 a very exciting thing happened to me.  My parents returned home one day with an Amstrad CPC 464.  Here it is, fired up for the purposes of this blog post and still working perfectly after over 30 years:

I am doing most of this from memory and it’ 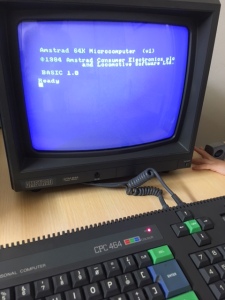 s a while ago, but as far as I can recall there were basically three options for a home computer at the time.  If you had a limited budget you could get a Spectrum.  Middle of the range was a Commodore and my best friend had one of those – it wasn’t bad and he had some different games I liked.  But the best choice if you could afford it was the Amstrad.  It launched with a price tag of £199 for a green screen version (basically black and white but green if that makes sense!) or £299 for a colour version, which was the one we had.  In today’s money that was equivalent to spending somewhere around £1000, so it was not an insignificant purchase.  The games were on cassette, so you had to put them in here:

Yes, keyboards were not just keyboards in those days (and the keys were properly chunky!).  Then you had to wait for the tape to go round and the game would gradually load up.  Even the simplest game would take a couple of minutes.  Some more complicated games required two sides of a tape or even more than one tape that had to be loaded.  One particularly frustrating piece of music editing software I had used to regularly run through to the end of the tape and do nothing, and after a few tries and about half an hour you might get it to load if you were lucky.  It seemed always worth it though.

Anyway, the point I want to get to is while this birth of home computing and home gaming all rolled into one was taking place, Doctor Who was going through its twilight years of its original run on television.  It was only popular enough by this point to inspire one game: Doctor Who and the Mines of Terror.  It passed me by at the time and really I can’t think it was particularly successful because I never heard of it until recently and I used to read two different Amstrad games review magazines each month and had very kind parents who used to get a lot of games that sounded worth playing.  Plus my friends didn’t have the game either as far as I know.  One day I must get round to tracking down a copy and having a go at it.

By the time of Dalek Attack in 1992 the Amstrad was past its heyday and although an Amstrad version was announced it never saw the light of day.  But that didn’t mean my computer game playing childhood was completely devoid of Doctor Who, because sometimes games makers had perhaps been “inspired” by Doctor Who, without actually having a licence as such!

Pictured here is my favourite Amstrad game of them all.  Head over Heels was wonderful fun.  Head and Heels started off imprisoned in different locations and each had different skills: one could climb but the other couldn’t; one was faster than the other; one could shoot doughnuts at monsters; one could carry things in his handbag.  Eventually you could get the two together and then Head could jump on top of Heels’s head, join together into a combined entity and then you could carry on the rest of the game with them together… although every so often you had to separate them again and send them off in different directions.  The scope of the game was huge.  If you were skilled enough at this kind of thing to avoid losing all your lives, you could literally play it from dawn to dusk and wouldn’t be anywhere close to completing it.  I did eventually complete it… on an emulator with a cheat mode.  Even then it took a huge amount of time and really it was amazing to see just how much game there was there – how they expected anyone to experience even half of it on an Amstrad I have no idea.  To put this in perspective, in those days if you turned your computer off it wouldn’t remember anything.  There was no such things as a “hard disk” where you could store saved games (although eventually I think I found a way to save game positions for some games on blank cassette tapes).

Head and Heels had to face some suspiciously familiar enemies, such as this chap: 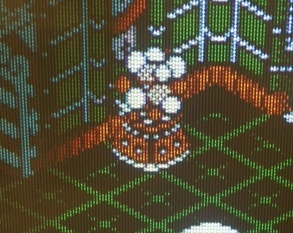 Surely there’s a Dalek somewhere under those balloons.  Then there was the day that Davros went in fancy dress as Prince Charles:

He wasn’t actually a monster – you had to steer him to the right place and then jump on his head to use him as a stepping stone.  Like Death to the Daleks and The Five Doctors, the floor was often the enemy in Head Over Heels.

Maybe I’m reading too much into the visual similarities, so I went looking on the internet to see if there was ever an Amstrad game with even more similarity to Doctor Who, to the casual observer.  Now I’m not suggesting for a minute that anybody copied anything here, but I found this:

I never had this game but was familiar with the Roland series.  I had Roland on the Ropes which was a lot of fun – basically working your way from the bottom of a castle type maze to the top, climbing up ropes and avoiding things like scorpions and ghosts, and also Roland in the Caves, which I played about a thousand times over the course of several years and never got past the first level.  In one evening my wife tried it for the first time and got straight through to the second level, much to my annoyance.

Anything look familiar with Roland in Time?  Surely that’s not a police box?  Is that a long scarf I can see?  Whether this was licensed by the BBC or not I have no idea, but I can’t find it in any list of officially licensed Doctor Who games.

One last thing.  I had this on a home-made tape, and have no idea where it came from:

I suspect it might be one of those games where they used to print the code in the computing language “Basic” in magazines and you laboriously copied it all in and hoped you hadn’t made any typing errors.  I might have done that and then saved the code onto a tape – that’s my best guess.  It’s called Daleks and it’s a simple little thing where you play as the TARDIS and make one move at a time while the Daleks all make one move towards you for each move you make.  I have played this many times and can confirm that it is completely and utterly impossible not to get caught by the Daleks each and every time you play it, even on the easiest game setting.  I’m not letting my wife have a go…   RP

Co-writer on junkyard.blog. Author of windowsintohistory.wordpress.com. Editor of frontiersmenhistorian.info
View all posts by Roger Pocock →
This entry was posted in Doctor Who, Entertainment, Games, Random Chatter, Science Fiction and tagged Amstrad, Head Over Heels. Bookmark the permalink.

2 Responses to Doctor Who and Amstrad