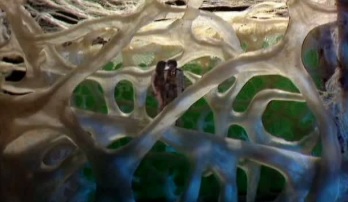 This is a significant moment in Doctor Who because it tends to get viewed as a cutoff point in terms of quality.  I managed to stomach a quick trawl around the internet to basically confirm my suspicions in preparation for writing about The Invisible Enemy, and the opinions I found on this story were overwhelmingly negative.  That’s fair enough, but a lot of the opinions are based on misconceptions, so I feel it is only fair to attempt to set the record straight and make the case for the defence.  First of all, we need to look at a few key facts to set this story in context.

So Season 15 began (and began behind the scenes with The Invisible Enemy) with a new producer struggling with a remit to make Doctor Who but with no money and without it being scary.  Keep that in mind, and you should actually be amazed how good the season is, with 50% of the stories falling into a category of quality that most people would consider above average for Doctor Who as a whole.  By my count that’s exactly the same result as the previous season, and I don’t see much delineation in quality between The Invisible Enemy and The Face of Evil, for example.  So bashing Graham Williams is an unreasonable interpretation of what is going on here.  Now, hindsight is a wonderful thing, but here is what I think would have been the perfect response to the situation Williams was facing:

And this is where the comparison with Horror of Fang Rock comes in, because that clever chap Terrance Dicks got all that virtually spot-on, and produced a scary story that seemed like a continuation of what we were used to, but fulfilled the new remit almost to perfection.  What ended up on screen was not perfect, mainly due to the star of Who sabotaging his own show by trying to direct himself, but the work Dicks turned out in response to the situation Doctor Who was facing was stellar.

Where Invisible Enemy falls down in comparison is that it (a) ignores the budget restraints and tries to do too much, and (b) gets rid of most of the scares rather than tailoring them toward the psychological and away from the violent.  The reason this happens is that Bob Baker and Dave Martin were actually brilliant at coming up with concepts for stories and enthusiastically threw everything into the mix, despite the lack of money to bring it all to screen.  Some of the ideas behind The Invisible Enemy are excellent, and they do actually manage to generate some fear by having the Doctor turn bad.  This is such a rarity for Doctor Who that it has a strong impact, and the fact that Tom is clearly enjoying himself with the idea really helps.

Baker and Martin take the lack of scariness instruction and use it to tailor their story far more towards children than Doctor Who has ever been, which is why this can be such a frustrating viewing experience for adults with so many ideas thrown in without being properly explored.  For younger children that’s not an issue: it’s a case of “wow, exciting” and then let’s move on to the next “wow, exciting”.  And for Doctor Who to work on this level is absolutely fair enough.  Yes, Doctor Who nowadays would take a completely different approach to the idea of short-lived clones of the Doctor and his companion being manufactured, and would fully explore the ethical issues this throws up, but there is nothing to say that is the only valid way to make Doctor Who.

And we mustn’t forget that this story gives us the debut of the very last great iconic “thing” for the whole Classic run of Doctor Who: K9.  Before 2005, if you had a question on the game show Family Fortunes, for example, asking people to name the things they associated with Doctor Who, the list would probably go something like:

So I can’t condemn The Invisible Enemy and I certainly can’t condemn The Graham Williams era.  We are at the beginning of a very different journey with this story, but it is still going to be an amazing ride…   RP

There was something wonderfully artistic about The Invisible Enemy  when I first saw it.  I think it was that episode 3 takes place in … wait, I’m getting ahead of myself.  The Invisible Enemy first captured my imagination with the space shuttle and the crew of three.  When I first saw this episode, I had already gotten my hands on the Doctor Who Technical Manual, so seeing this ship in action was an immediate lure.  Then came something that, to this day, creeps viewers out – the voice of a hive mind.  In Torchwood: Children of Earth, all the children speak the same words, simultaneously.  Here, it’s just the same few words repeated by everyone infected: “Contact has been made”.  It’s eerie.  Simple as that; something has happened that can affect machine as well as organics… and it’s creepy!  And in this case, “hive mind” is probably more precise than intended.

There’s something to be said about the Doctor that is consistent.  Capaldi’s Doctor said that when a distress call is sent, that’s the true face of the universe and how they respond shows theirs.  Good to his methodology, a distress call leads the Doctor and Leela to Professor Marius, the Swarm, a new friend and a trip down memory lane.  So, in order:

I also enjoy those little nuances, like the notion that Gallifrey must be in Ireland!  (Every year I go to Ireland and have yet to find Gallifrey…)

The story has got its share of weak elements, but what show doesn’t?  The look of the silver fur on those infected is a bit silly.  And poor Leela!  The virus thrives on intellectual activity so she’s “immune”!  I wonder how Louise Jameson felt about that?   Clearly Leela has a brain so that seems like a very rudimentary explanation!  She may not be a scientist, but she does think and she tries to understand things. And she was right about the threat on Titan that the Doctor ignored, so I think it unfair to say that she’s so instinctive that the virus doesn’t affect her.  But that leads me to wonder if Susan or Dodo would have been infected.   I have my suspicions…

Once again, Doctor Who gives us an interesting story, some brave visuals and a new companion.  Best of the Tom Baker era, it is not!  But far from the worst.  This is still the era of chills and, while not as tense as The Horror of Fang Rock or most of this Doctor’s first couple seasons, it is a fun story.  Even if the Nucleus does look like a reject from the Muppets.

As I write this, I can’t help but wonder, if the virus came to Earth, how many people would really be impacted?  Could we already be infected!   Typically I will avoid political humor as I really do not wish to offend anyone; I want this to be an insult-free zone and I will not judge his views or political actions.  However based solely on appearance, as Sesame Street used to say, “one of these things is not like the other” and I think in this case, that unlike thing is Tom Baker.

Read next in the Junkyard… Image of the Fendahl

5 Responses to The Invisible Enemy