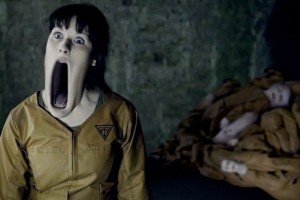 As I approached the end of October, I was considering doing another 6 Degrees article about The Strain, since the series ended and it makes for a good Halloween theme but there may be a better time for that when Twice upon a Time arrives in December.   Instead, since we’ve been looking at elements of horror in Doctor Who, I felt it was better delving deeper into that theme.

As we’ve seen, horror can come in many forms.  As a kid, I liked scary movies more than I do now because too often, they are gruesome for no reason and not at all scary.  You need to find the right balance.  For most horror movies, the problem is one of gratuity: when something is done just to be over-the-top, it usually doesn’t hold up well.  There are two video games that drive the point home very well: Doom 3 and F.E.A.R.  (They came out close to one another: 2004 and 2005).  Doom 3 put the player in some really dark, quiet areas that suddenly burst to life with loud sounds.  BOOM!  Sure, I jumped but when it was done, it was just a shooter with gallons of blood and viscera everywhere.  It wasn’t bad, but I can’t say anything stood out that I can recall in 2017.  F.E.A.R., by contrast, left images in my mind that I can still recall quite vividly 12 years later.  So the trick is to get that balance between scary and memorable.

Luckily, Doctor Who has managed to take established, memorable themes and make them approachable for a younger audience while still keeping something of the fear factor.   Let’s be honest, who’s going to let their 8 year old kids watch The Phantom of the Opera, Dracula, Alien, or anything Lovecraftian?  And yet, that is exactly what they were watching in Doctor Who.  I know I was!  The Talons of Weng Chiang, State of Decay, Ark in Space, Curse of Fenric, respectively, all gave us a glimpse into those worlds.  The villain of The Caves of Andrazoni bore a striking resemblance, at least on the surface, to The Phantom of the Opera too!  What about the truly nightmarish Invasion of the Body Snatchers?  Its influence can be found in number of stories: The Faceless Ones, Spearhead from Space, Terror of the Zygons, The Android Invasion and the Horror of Fang Rock, to name a few peas in that pod.  In the new series, I’d even say The Rebel Flesh shares a lot with that one too.  And The Day of the Triffids (whose original version co-starred Susan Foreman herself, Carole Ann Ford) planted the seeds in a number of Doctor Who stories like Fury from the Deep, Seeds of Death, Seeds of Doom, & Terror of the Vervoids.  The grandfather of Science Fiction, H. G. Wells, is a clear inspiration for the time traveling Doctor, but Timelash pays significant homage to many of his greatest works including War of the Worlds, The Time Machine, The Invisible Man, and the Island of Dr. Moreau.  Moreau might also be behind The Underwater Menace as well.  And The Ark is nothing to sneeze at when one considers the influence of The First Men in the Moon.  Jules Verne’s influence may have traveled around the world and had an impact on the crablike lifeforms of The Macra Terror, courtesy of The Mysterious Island.  And perhaps 20,000 Leagues under the Sea caused some waves around The Underwater Menace?

But that is far from a complete list!  Hide and Ghost Light are tales in the spirit of countless ghost stories.  Pyramids of Mars and Mummy on the Orient Express jump in the sarcophagus with any number of mummy movies.  There are even clues that Agatha Christie, the bestselling mystery author of all time, is honored with The Robots of Death, The Unicorn and the Wasp, and Mummy on the Orient Express.  Yes, it is no mistake that I’ve listed that one twice; Doctor Who often bleeds two ideas together, frequently to great effect.  You’ll have a devil of a time finding all the various 60’s and 70’s horror movie influences on The Daemons.  Speaking of horror movies, all those Hammer movies that influenced Tom Baker’s era should be given a hand!  For instance, Dr. Terror’s House of Horrors has a dismembered hand that clearly took hold of The Hand of Fear.  Masque of the Mandragora might be influenced by Phantom of the Opera or Masque of the Red Death, but dress it up however you’d like, they are both very frightening.

Grab a magnifying glass but you won’t have to look too closely to find the similarities between Sherlock Holmes and The Talons of Weng Chiang, complete with a giant rat of Sumatra… for which the world may never be ready!  Holmes is also given a repeat performance in The Snowmen, but it’s a weak one; I’d give it the cold shoulder.  Werewolves are surprisingly scarce in Doctor Who, turning up only once in a full blue moon, but when they do, there’s The Greatest Show in the Galaxy and Tooth and Claw.  Speaking of The Greatest show in the Galaxy, there are dark, Lovecraftian themes being conjured up in that Psychic circus.  Image of the Fendahl also finds mythos horror slithering through our skulls.  We may have awoken Lovecraft when we disturbed the Tomb of the Cybermen and a little retroactive continuity saw The Abominable Snowmen connected to the Great Old Ones.   We can’t turn the other cheek from Dr. Jekyll and Mr. Hyde either on The Planet of Evil.  And it wouldn’t take Pinky or the Brain to piece together the influence of Frankenstein, complete with hunchbacked assistant, in The Brain of Morbius.  Cold War & The Ice Warriors both shared a cold one with The Thing from Another World.  Elements of that can also be seen in The Tenth Planet.  It’s no small coincidence that Planet of Giants appears to be a retelling of Richard Matheson’s The Incredible Shrinking Man.  And no, I’m not ignoring the 300 pound gorilla in the room: Robot is also clearly influenced by King Kong, as he climbs buildings with his Sarah-Jane Smith doll.   The Day the Earth Stood Still seems to have a major influence on Robot as well, although no one thought to try to use the catchphrase to stop Kettlewell’s creation.  Klaatu, Barada… necktie!  (Points if you know where that came from!)

Doctor Who is not free of the influence of other TV shows either.  We can count the influences of The Outer Limits on one hand with Harlan Ellison’s masterpieces Demon with a Glass Hand and Soldier in Day of the Daleks.  Specimen: Unknown, another Outer Limits classic, may have been the green thumb behind Seeds of Death and Seeds of Doom.  Time-Flight takes a journey into a wondrous land whose boundaries are that of imagination with The Twilight Zone’s: The Odyssey of Flight 33.  The Zone’s influence might also tick over into The Space Museum with A Kind of Stopwatch.  Asimov’s Fantastic Voyage injected an idea right into The Invisible Enemy and Into the Dalek.   The writers pulled the idea of Battlefield out of a stone in King Arthur’s court and Tolkien’s Lord of the Rings saga seems to have sent the Doctors on a quest to a dark tower in The Five Doctors.  It would blow one’s mind at how many different influences there are in The Mind Robber, from Gulliver to Rapunzel.  (Well, not everything is an A to Z list!)

And then there’s the kings of terror, those eight legged freaks: Spiders!  They even found an entire planet to infest in Planet of the Spiders.  There’s no telling how many movies influenced this idea but I’d bet it was a more horrifying take on: Them!  (Do the Rachnos ever go there for family gatherings?  One wonders!  I’ll be avoiding the Acteon Galaxy anyway, just in case.)

By no means was I aiming for a complete list; it would be too challenging.  For instance, I’ve seen all the Quatermass movies and know they influence Doctor Who heavily, but I don’t recall them well enough to use them for examples.  I know readers will feel like I ignored that; I didn’t!  But that’s the catch: you can find references throughout Doctor Who to other scary stories all the time.  Maybe The Mind Robber doesn’t belong in the scary column, but it’s too creative to ignore.

It’s scary to consider the vast cornucopia of movies, shows and stories by which Doctor Who has been influenced.  It is amazing that our favorite show has been able to take all of these themes and make something creative and new out of them.

I’m looking forward to seeing other suggestions from readers.

We have a few days left to explore the dark places; know your horror so you know how to defend against it.  And until then…

See you in the dark corners of the universe.   ML

Author of windowsintohistory.wordpress.com Co-writer on junkyard.blog Editor of frontiersmenhistorian.info
View all posts by Roger Pocock →
This entry was posted in Doctor Who, Entertainment, Random Chatter, Science Fiction, Television and tagged Halloween, Horror. Bookmark the permalink.

Leave a Reply to Your sister Cancel reply