Doctor Who and Horror 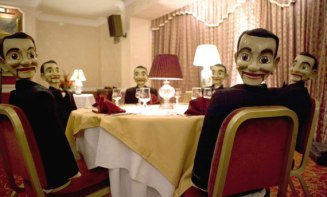 This month on The View from the Junkyard we have been tying in with the theme of Halloween by looking at some Doctor Who stories from the scarier end of the spectrum.  Stay tuned for a couple more prime examples over the next two days.  But in the meantime let’s take a wider look at Doctor Who’s relationship with the horror genre.

Doctor Who generally gets described as sci-fi and that’s fair enough, but it doesn’t fit comfortably into that category alone.  Sometimes it has soap opera leanings.  Often it is fantasy with the merest trappings of sci-fi, generally a bit of technobabble to give a thin veil of scientific respectability to the monsters it is showing us.  The same tactic is generally employed when Doctor Who does horror.  So Doctor Who gets to play in that playground with vampires, witches, ghosts, werewolves, mummies etc, as long as it throws in an afterthought of “by the way, this ghost is an alien entity”, or “by the way this mummy is a robot” or whatever the case may be.

But Doctor Who has to be family friendly, so it borrows the scares and shuns the gore.  And that’s where it really scores, because blood and gore in horror movies is not the frightening bit.  I can’t watch things like Saw – they are simply distasteful, not frightening.  The real scary stuff is the psychological horror, and that’s why Doctor Who works best when it is playing around the edge of the genre and borrowing its tropes, rather than doing, for example, a vampire story.

That’s actually a good example, because the two main attempts at vampire stories in Doctor Who were reasonably successful, but don’t reside at the scariest end of the Doctor Who scale.  Because the things that vampire stories do best rely on showing things happening that simply can’t be shown in Doctor Who.  And when you try to show them in a Doctor Who-ish way, e.g. somebody drinking blood through a straw (Smith and Jones), you end up with something that is (a) not frightening and (b) crossing a line despite trying not to.  For similar reasons werewolves have been rarely attempted and only moderately successful.

So what does really work well when Doctor Who borrows from the horror genre?  Exactly what works best in the horror genre itself: psychological horror.  These are the things that are not about blood and guts and killing people.  After all, Doctor Who shows us people getting killed all the time and we don’t even normally get a chance to reflect on the consequences of that – it just washes over us.

What really has an impact is when we are shown things that tap into fears and phobias: ventriloquist dummies, inanimate objects such as dolls coming to life, body alteration creating monsters (Cybermen), shadows, things that are human in appearance but are inhuman (Autons, Weeping Angels), darkness, unseen dangers, the monster under the bed, something outside trying to get in.  And what this does so well is taps into fears that develop during childhood.  Doctor Who itself is an experience that grabs you during childhood and doesn’t let go, and when that is also reflected in the monster, it makes for truly compelling viewing.  That’s why Doctor Who and horror go so well together.   RP

Author of windowsintohistory.wordpress.com Co-writer on junkyard.blog Editor of frontiersmenhistorian.info
View all posts by Roger Pocock →
This entry was posted in Doctor Who, Entertainment, Random Chatter, Television and tagged Halloween, Horror. Bookmark the permalink.

1 Response to Doctor Who and Horror