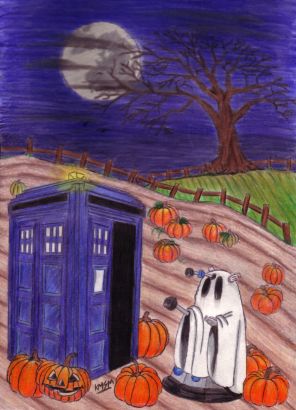 “Exterminate or Treat?”  Artwork by Katie Marriott (scroll down for a larger version)

For this Halloween special on The View from the Junkyard we are going to break with tradition and focus on just one individual episode from the classic series: the most Halloweeny episode of them all, Journey into Terror.  This is the fourth episode of First Doctor story The Chase and just to set the scene writer Terry Nation has already had his last original idea for Doctor Who and is phoning in a story about Daleks chasing the Doctor across space and time, which is a format that, like The Keys of Marinus, allows him to make it all up as he goes along.  By accident it all turns out to be the most wonderful fun.  Nation will continue not to have any more new ideas until he finally writes his all-time classic by using somebody else’s new idea.  But Halloween is all about having fun so let’s take a look at this episode as if it is actually something written by a writer who was putting a great deal of thought into the themes behind his work, and go as deep as we can with analysing it.  In fact, Halloween is often a silly time so let’s be a bit silly with the analysis and be like the Doctor Who fandom shown to us in Blink, reading things into the episode that are not there…

So the episode itself shows us two alternative explanations about what we are watching here.  First the Doctor makes the deduction that they have landed in a dream.  Then the episode shows us that we have been watching an exhibit for the “Festival of Ghana”.   Now one of those we need to reject straight away, and it might not be the one you are expecting, but the Festival of Ghana thing makes zero sense.  If these are some kind of robotic exhibits or actors dressed up for the festival then they would clearly not behave in the way they do when the Daleks turn up and start trying to kill them, and even if they did then they would not be immune to Dalek weaponry.  So we have to instead roll with the Doctor’s idea, however bizarre it may seem, and assume that the “Festival of Ghana” bit is still within the dreamscape, i.e. being dreamed by somebody.

So is there any significance in the choice of Ghana?  It does seem rather a random choice, but it is a former British colony and the first African nation to gain independence.  At the time Nation was writing this episode it had become a one-party state and was heading towards a military coup, so for the intelligent follower of international news in 1965 it flows reasonably naturally that something he/she had read about or heard about on the radio could get mashed up into a dream.

So what we have is the TARDIS somehow bursting through the fourth wall and landing in the dream of one of the Doctor Who viewers, in 1965, in an attempt to find anywhere the Daleks can’t follow.  As will later happen with The Mind Robber, we are outside of time and space.  But of course the dream of a viewer is exactly where the Daleks belong, and have no problem joining the party to make a weird combination of things that don’t fit together.

Our 1965-vintage viewer has probably been watching some Hammer Horror films (maybe The Brides of Dracula or The Evil of Frankenstein, both of which are from around this time), or maybe is a child who has been reading about monsters before going to bed.  The dreamer is dreaming a cliché, with Dracula, Frankenstein’s monster, and the Grey Lady.  Into this dream the Doctor, his companions and the Daleks intrude, and now the dreamer is having a nightmare.

So why does the TARDIS land in this particular nightmare?  Because the dreamer is already dreaming about Doctor Who, but in allegory, complete with a hidden Dalek that is already in Frankenstein’s laboratory before the Daleks even arrive.  Yes, we are going to be that charitable, and even work a production slip up into a critical reading of the episode as if it’s deliberate!

In the nightmare set up we already have characters that are representative of the Doctor and his companions:

And let’s bear in mind that all of this takes place within a wider story that has been firmly fixed by the Visualiser as taking place within a television screen.  And that makes anything possible, even Journey into Terror.

Don’t have nightmares.  Have a Happy Halloween.   RP

Roger and I discussed Journey into Terror and how we could honor that for Halloween while keeping it separate from its overall story: The Chase.  Roger posed the fascinating idea of being in a dream.  But there may be another option that keeps to a more “in-universe” solution… The Mind Robber.

If River Song taught us anything, it’s that the Doctor’s life doesn’t happen in order.  Even if it does, it might not always make sense to the viewer until later.  In The Mind Robber, we are shown that someone is watching the Doctor, Jamie and Zoe and wants them captured.  He sends his White Robots out to capture them.  Why?  Because they are intruders?  Maybe.  Or could it be that he encountered them before in Frankenstein’s House of Horrors in the made up fiction of the Festival of Ghana?  Let’s consider the possibility that the Master of the Land of Fiction has this haunted house scenario complete with Frankenstein’s monster, Dracula, Bride of Dracula, bats, lightning, creaking doors and floorboards, trapdoors, skeletons… the works.  Now, out of nowhere, a blue box materializes in it and people get out and begin to explore.  He watches them, intrigued.  They leave as mysteriously as they came.  And he wonders forever who and what they were… until that blue box turns up again!

From the TARDIS team’s point of view, they most likely all knew the stories of Dracula, Frankenstein… all of the classic horror movies.  So the fact that the Doctor claims that he knew that what was under the sheet would move should come as no surprise.  On top of that, they mention Daleks early on, so the Master could have added them to the castle as another terrifying thing to be part of the fiction.  Consider this: the Dalek we see in Frankenstein’s area never leaves that alcove and there was no way for the actual Daleks to have arrived in that little area, remembering the stairs leading into the lab were blocked by the Doctor and Ian the whole time.  So perhaps we’re seeing one made-up Dalek, created by the Master of the Land of Fiction, as well as a group of them that managed to arrive right behind the Doctor.

Note something else; when the episode starts, the TARDIS is seen in a kaleidoscopic image; not traveling through normal space-time.  Yes, that could make the dream theory a possibility, but it also could be the gateway to the Land of Fiction.  And if the Master of the Land of Fiction created a horror-themed world and saw the Doctor leave as mysteriously as he came, in that blue box, it would be little wonder that when that box turns up again, now with a seemingly different man at the helm, it would make sense that he’d want to capture that man and find out how he is able to move so freely between reality and fiction.  So he sends his White Robots and … well that becomes The Mind Robber.  But this could easily be a prequel to that Troughton Classic!

Let’s not ignore the malfunctioning robots which we are lead to believe is what Frankenstein’s Monster and Dracula are.  If they were truly robots that are part of this exhibit, as Roger pointed out, they would not malfunction.  They would probably just break down!  I also don’t think Frankenstein’s Monster would put a coat on after leaving his operating table, but he appears to.  On the other hand, if it’s a construct by the Master of the Land of Fiction, perhaps he “writes” the coat onto Frankenstein’s Monster and sends them to protect the fiction he created.  Why not?  A writer is likely to want to defend his or her own work; why not use his very creation to do that!

None of this is to say that the Doctor can’t land within a dream, but I don’t know how I feel about him breaking the 4th wall to such an extent.  The truth of the matter is that the production back in the 60’s was cheap and didn’t really go out of the way for protecting continuity the way we would today.  But for those of us who like a contained, internal logic, I think the Land of Fiction is as good a place as any for this story to take place.  And while it does, it gives us a brief, happy romp into a Halloween-themed episode.  And it’s a fun trip too.  Hartnell is absolutely hysterical as he runs up the stairs away from Frankenstein’s Monster, leaving Chesterton behind!

And maybe it opens the castle doors for us all to explore those haunted places now and then, especially on that perfect day!

From deep within a dark, cobwebbed corner of the Junkyard…

3 Responses to Journey into Terror