Vincent and the Doctor 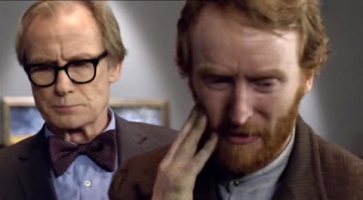 There are very few episodes of Doctor Who that you can’t write about without talking about the writer.  Vincent and the Doctor is one of those select few, because it is written by Richard Curtis.  This is the only example to date of a writer coming to Doctor Who with such a reputation and background that he is a familiar name to the general public.  It has happened the other way round, with Douglas Adams working on Doctor Who before he was a household name.  To be clear, I do realise that others such as Rona Munro are hugely respected and there will be plenty of viewers who have heard of her, but Richard Curtis is in a different league.  His name is probably familiar to the majority of British television viewers.  Oddly, this hasn’t really happened before.

The reason I say this is odd is that Doctor Who is a television series that has run on-and-off for five decades.  It regularly attracts the biggest named stars in television in guest roles, and deserves to do so.  It often does this because the actors have children or grandchildren who watch Doctor Who, and want to see them appear in it!  So it seems strange that the same thing hasn’t happened with famous writers.  Perhaps they don’t get asked?  If we are trying to think of big name writers being asked and saying no, how many can we think of?  I believe JK Rowling has been asked but was too busy, but she is the only name that comes to mind.  Stephen Fry said yes, but his script never made it to screen.

So suffice it to say, Vincent and the Doctor is something very unusual.

What am I in the eyes of most people — a nonentity, an eccentric, or an unpleasant person — somebody who has no position in society and will never have; in short, the lowest of the low.

So how does the writer of Blackadder approach Doctor Who?  In much the same way as any other writer, but turned up to eleven: he uses it as a springboard for writing about something that interests him, and then throws in some sci-fi trappings to make it Doctor Who.  The difference is that he is not a Doctor Who fan and his lack of interest in that side of things comes across clearly, with the story’s overwhelming focus on Vincent and almost afterthought of a monster.  But this is Richard Curtis, so he weaves his afterthought beautifully into the story and uses it as a metaphor for disabilities creating special abilities.

Other reviewers (and this seems to be the almost universal approach to writing about the episode) have called this a cliché and questioned the reality of the phenomenon of heightened abilities as a product of the loss of a sense.  Not only is this hard-hearted, but it also ignores the wealth of research that suggests this is actually a very real ability of the brains of humans and animals.

Poetry surrounds us everywhere, but putting it on paper is, alas, not so easy as looking at it.

So the invisible monster offers us a parallel with Vincent, whose mental illness is shown to be both a burden and a gift.  Again this gets criticised, and again it’s not really a valid criticism.  Vincent is shown as bipolar, which is not necessarily the condition that affected him, but is as good a guess as anything.  There are a few theories but we can’t really ever know.  Using this as a starting point, it follows that great creativity can flow from the condition.  Probably the most high-profile example we have in Britain is Stephen Fry, and we can look to him as our example of why this episode hits the nail on the head so well.  Here’s what he had to say about the condition in an interview with the Independent (16/9/06): “It’s tormented me all my life with the deepest of depressions while giving me the energy and creativity that perhaps has made my career.”

So I can’t help but find it distasteful to read reviews that slate the episode for somehow being unrealistic in showing mental illness as the source of artistic ability.  Richard Curtis has worked with Stephen Fry on upwards of twenty occasions.

Though I am often in the depths of misery, there is still calmness, pure harmony and music inside me.

In any case, even if criticising the story for a clichéd or factually incorrect approach were somehow true, then it is still not valid, because this is Doctor Who and it needs to tackle these kinds of issues in a very specific way.  It needs to be tailored to the family demographic with young children watching, and it also needs to be reasonably positive about things.  Doctor Who as tragedy simply doesn’t work.  This is Saturday evening entertainment, not gritty late night drama.  Curtis finds ways to put a positive spin on what was ultimately a tragic life.  He does so without ignoring the tragedy, but largely keeping it visually off-screen, and balancing it with a portrayal of Vincent that keeps his artistic genius at the forefront.

When I have a terrible need of — shall I say the word — religion. Then I go out and paint the stars.

He also makes a point that I think is the best thing about this episode: trying to help somebody is not invalidated by failing.  There are some problems that even the Doctor cannot solve, and this is one of those.  In the past this has been a stumbling block for the series, showing the Doctor as either helpless or unfeeling during historical stories in which the conclusion was inevitable.  But Curtis finds a way through that, by having the Doctor help on the smaller scale.  He can’t fix Vincent or save him, but he can give him a wonderful gift by taking him to the museum, so that Vincent doesn’t have to die thinking that his art will be forever unappreciated.

The more I think it over, the more I feel that there is nothing more truly artistic than to love people.

That scene in the museum is one of those wonderful moments in Doctor Who where everything comes together: the combination of a writer who is an absolute genius and a group of actors all at the top of their game.  It is tragedy and joy rolled into one.  It is perfection.   RP

I remember when I saw Vincent and the Doctor, my friend Reza told me it was his favorite episode that season.  (You may recall my mentioning him here: Fear of Loneliness)  Now, that’s significant because he might have been 11 at the time but his need for monsters and action was trumped by a concern surrounding a real life issue.  An issue, I might add, that was handled very compassionately by our favorite Science Fiction show.  In fact, at the time of broadcast, the end credits ran with an announcer suggesting anyone with emotional trouble should call a hotline.  But that’s beside the point…

What is it about Vincent and the Doctor that made it such a stand-out episode?  Plot wise, it’s a bit silly.  An invisible monster is terrorizing a small town in France.  Only Vincent Van Gogh can see it but the locals see him as a nutcase and even blame him for the troubles that befall the town.  The Doctor arrives and, with Vincent’s help, locates the creature and rids the town of the menace.  Simple.  In the process, the Doctor and Amy develop a friendship with the tormented painter, who in turn develops a bit of a crush on Amy allowing for another brilliant scene at the end of the episode.

Vincent absolutely steals the show usurping Time Lord and Krafayis alike.  He struggles desperately with mood swings and doesn’t know how to cope with them.  Before the Doctor and Amy leave Vincent to history, the Doctor takes him to the future to see the impact he has on the world.  And what a scene it is…

It’s such a powerful, feel-good scene that it’s impossible not to join Vincent with tears of joy.  Tony Curran plays Vincent perfectly.  His depiction of a disturbed man who was capable of such amazing pieces of beauty is handled both delicately and joyfully.  His distress is heartbreaking, but his happiness and his view of the world is triumphant.  The beauty he sees in the everyday world is awe-inspiring.  His brief glimpse into his impact on the future is amazing.  Athlete’s “Chances” plays in the background as Vincent arrives outside the Musee d’Orsay in Paris; it accompanies the scene like a partner in a dance.  Dr. Black (the uncredited, truly superb, Bill Nighy) conveys the raw, overwhelming beauty of Vincent’s life so sublimely, it will leave you speechless.

The idea that the Doctor saves worlds is fun, but the idea that he could bring so much joy to one man: well, isn’t that the true heart and soul of the show?  A show that resonates on such a deep level going beyond the silly, the action, the monsters… and giving us joy!  That’s the heart that beats in the shows proverbial chest.  Richard Curtis, the writer of the episode, did a heck of a job putting both of the Doctor’s hearts into this story!

And we can use this long-running science fiction show as a medium to remind us that many of us have inner demons.  It’s hard to maintain perspective sometimes but we don’t always know when someone is fighting with their inner Krafayis, like depression and anxiety….  We can let this serve as an example: remember Vincent!  The impact his life had on the world was enormous and has been felt for over 100 years!   He may not have known it in real life, but his influence may be timeless.  We can’t always know what our impact will be; but we can’t assume it is insignificant, no matter how insignificant we feel at any moment.  There are people in my life that would create tsunamis if they went away; they are my “Vincents”  but their impact goes far beyond anything they might suspect.  And that’s true of each of us: we all have our own “Vincents”.  We have to remind them and encourage them; never let them forget that they create their own art in our universe.  To all of those who add to the beauty of our lives, remember: “Everywhere we look, the complex magic of nature blazes before our eyes.”

Doctor Who is always fun, frequently silly, and periodically inspiring.  To quote Vincent: “I believe, if you look hard, there are more wonders in this universe than you could ever have dreamt of.”

True. And I know many of them!  ML

Read next in the Junkyard… The Lodger

5 Responses to Vincent and the Doctor