This is the second of Neil Cross’s Doctor Who stories, and is by far the simpler of the two.  That was entirely deliberate, with the writer intending to put together a very self-contained small-scale Doctor Who story, and in fact the slightly disjointed structure is due to things being imposed on the writer at the script editing stage.  Unusually for Doctor Who, there is not much going on thematically.  There is a pretty obvious attempt to compare the Doctor with the Crooked Man, with the line “every lonely monster needs a companion”, but this is superficial.  Any comparison with the Crooked Man or with Alec, the other obvious parallel for the Doctor, ultimately falls flat because the Doctor and Clara’s relationship is not being defined in terms of a romantic relationship, so let’s assume that is a deliberate red herring at a point at which we don’t have an answer to the mystery of Clara.

Cross doesn’t concern himself much with parallels or thematic depth, and instead concentrates on telling a jolly good scary story, borrowing from various psychological horror films.  Last month on The View from the Junkyard I wrote a lot about how psychological horror works so well for Doctor Who, and is really the only area of horror that it can do without compromise.  Hide takes inspiration from The Ring, Poltergeist, and Silent Hill, among others.  Most strikingly (although this is likely a coincidence due to the film’s relative obscurity) Hide is reminiscent of The Watcher in the Woods (1980) an unusual Disney experiment at horror for young adult viewers, which features a girl who has been forced to exchange places with an alien from another dimension; the action centres around an old manor house, and surrounding woodland.  Note how this is a blend between psychological horror and sci-fi, playing to a younger demographic than the genre normally does: in a nutshell that is how Doctor Who always has to approach horror.

Again, Neil Cross writes Doctor Who as pseudoscientific fantasy, which is my favourite flavour of Doctor Who, although I know a lot of people get hung up on things “making sense” and won’t enjoy this approach.  The Doctor has always been a magician in a magical box (often with a magic wand), with the series having fun with the old adage of sufficiently advanced science being indistinguishable from magic.  This allows writers to basically tell any story they want to tell.  A ghost story with a magic portal to a fantasy world?  No problem.  The Doctor can build a “psychochronograph” out of clocks and it’ll all be fine.  There are hints in this, and in The Rings of Akhaten, that Neil Cross looked at Phil Sandifer’s blog as research for his two scripts, and the psychochronograph is the clearest hint of that.  As Sandifer points out, it seems like a call back to the kind of approach that gave us mirrors as a time-travel device in Evil of the Daleks.  Clocks or mirrors having power over time is magic, not science.  Not for the first time, this is positioning the Doctor as a Merlin figure, even naming the house Caliburn (another name for Excalibur).

Although he is really going for a straightforward psychological horror, Neil Cross does throw in an interesting subversion of the genre.  Ghosts are always echoes of past history, normally traumatic events, but the ghost here is an echo of the future.  In this respect it refuses to follow the normal rules.  It is also turns the Grandfather Paradox on its head.  Emma and Alec learn that Hila is their descendant, which basically forces them into a fatalistic existence.  They have to get together, or Hila might just as well shoot them and trigger a paradox, because she will be paradoxical just as surely.  This raises interesting questions about the extent to which the Doctor is existing in a pre-defined universe and is merely a Curator of history… but that’s a discussion for another day…   RP

Conventional romances are a dime a dozen, if you ask me. Every 2nd movie hitting theaters is a romantic comedy.  Every 5th is an actual romance, some bordering on distasteful, some not bothering with the border and jumping far beyond the realms of taste.  But in the end, it’s all the same: boy and girl meet, boy and girl fall in love, one of them offends the other by some stupid action, they find each other again and realize we’re all human but they still love one another, let’s get back together…. Happy-sappy, clap, clap, clap!  And in almost every case, it’s a question of “been there, done that, got the t-shirt… then threw it away because I had identical ones already!”

“But why are you talking about romances?  Hide is a ghost story!”

Quite right, too!  I must have gotten distracted.  Hide is a ghost story.  It’s Doctor Who’s attempt at remaking Poltergeist complete with a white void that our hero has to dive into while roped to the “real world”.  And it’s marvelous!  From the moment the episode opens and the Doctor and Clara actually hide on the occupants of the “creepy house”, only to jump out to scare them, you know it’s going to be fun.  Once we learn about the “Witch of the Well”, we know there’s a good mystery to be unraveled; we’re in for a treat.  Complete with eerie forest, dissolving pocket universe, jarring camera movements for the monster, a superb looking monster, and a hell of a supporting cast, this episode delivers.  On top of that, the music is perfect as well.  This episode is heavy with atmosphere; it takes hold of the viewers’ attention and doesn’t let go!

In a nutshell, The Doctor and Clara arrive to help Alec Palmer and Emma Grayling investigate a “haunted” house.  During the investigation, it seems clear that something is in the house with them.  But there’s also a pocket dimension with a trapped time traveler and something chasing her.  And it’s all a race against time because they have to save her before the bubble universe collapses.

So how does this story compare to Poltergeist?  I’m sorry classic movie buffs, but Doctor Who does it better!  And here’s why…

The monster is always the bad guy right?   If it looks distorted and weird, it is almost definitely evil.  But that neither makes sense nor do I find it to be the case.  And in this, the creature in Hide (referred to as the Crooked Man) is not the bad guy.  In fact, there is no bad guy!  It’s about two people investigating what ends up being a botched time travel experiment that leaves Hila Tacorien stuck in a pocket universe.  And it is predicated on the idea that Hila is trapped and being hunted by something evil in that universe.  It’s not until the Doctor saves her and gets out of that alternate dimension that he realizes something:  that Alec and Emma have been falling in love.  And that’s when the real punch of the episode occurs.  They are not the only ones!

There is something inside the house.  There is also something inside the pocket universe.  And all these two “somethings” want to do is… be together!   Talk about a marvelous love story!  It’s a ghost story and a love story and it’s completely unconventional, which works absolutely brilliantly.  I can’t even hold it against Matt Smith that he can’t pronounce “Metebelis”!  (Maybe it’s like potato/potato …. Oh, that doesn’t work so well unless spoken aloud…  You get the idea!)

Yet again, we’re shown that Doctor Who is a show with heart.  I love when the monster doesn’t have to be evil.  I wish more stories were about friendly monsters.  I wasn’t overly impressed by Neil Cross’s last installment, but this one is rock solid in my book!

See, I wasn’t really that confused when I started this review!

And I can’t help but love that the Doctor calls this guy “Romeo”!   ML 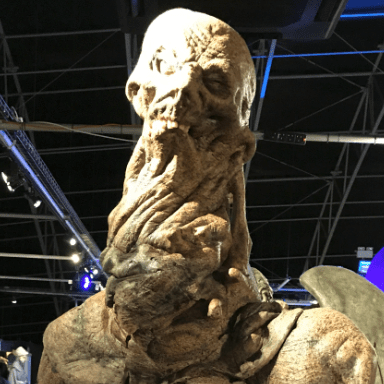 Photo taken at The Doctor Who Experience, in Cardiff.