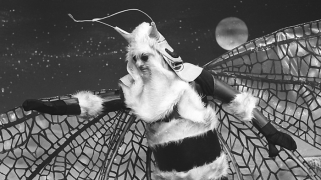 The TARDIS is nearly always a safe haven.  Up until this point, only The Edge of Destruction has been the exception to that rule, and that was because it was malfunctioning rather than any outside influence.  We have never yet seen anything get into the TARDIS, and any drama involving the ship has been to do with separating the regulars from it.  Even in The Daleks, which undermines the ship as a means of escape, the Doctor turns out to be the one doing the undermining, and the TARDIS is still a safe haven – just look how it is presented to us when Susan returns for the radiation gloves, and how reluctant she is to go back out into the petrified forest again.  So it has been firmly established that the TARDIS is the one place that the Doctor and his companions can take a breather from the dangers they face.

The Web Planet changes everything.  This is the first time we see it captured by something on a planet, and also the first time we see a monster get inside.  The scenes with Vicki in the TARDIS while it is under attack are genuinely frightening.  This sets the tone of the story, which is all about placing the Doctor somewhere he should not be, because he is out of his league.  So this feels more of an “epic” story than even The Dalek Invasion of Earth, in the sense that it never looks like the Doctor is in any kind of control of the situation.  Notably, he ultimately fails and has to be saved by Barbara, who herself wins by luck.

This provides the perfect opportunity for the Doctor to grow as a character.  He is an anarchist in the face of an overwhelming foe, and gives the impression of being capable when in fact he is just muddling his way through, all enthusiasm and laughter.  Here is where the Doctor starts to have bravado, and refuses to treat a force more powerful than himself with respect, most obvious in the hairdryer moments.

So we have a truly epic story in the nature of the threat, and a Doctor being more Doctorish than ever before.  Back in my Planet of Giants review I mentioned how the wrong lesson was learnt from the success of that story, and that lesson was that giant insects work well as a Doctor Who monster.  The Web Planet attempts the near-impossible by making a whole story out of that.  Amazingly, it manages to succeed on every level that matters, and the viewing figures tell the tale of this story’s success.  It maintained between 11.5 and 13.5 million people watching throughout the six episodes, and charted between 7th and 14th, breaking the top ten twice.  It is not quite the most successful story of the Hartnell era (The Rescue) but sustaining that level of success is a clear indication that the viewers enjoyed it.  In light of that, we perhaps need to consider why all the criticism this story receives is simply wrong.

I am not going to argue that the aliens in this story don’t look like actors in costumes.  Then again, I wouldn’t argue that for virtually anything other than Daleks.  Looking at the stories up to this point, the Zarbi and Menoptera are no less convincing than the Voord, Sensorites, etc.  Was anyone really watching them and believing they were real aliens?  Doctor Who simply doesn’t function on that level, and doesn’t need to.  Looking further ahead, the best comparison is probably the original Cybermen.  It took a long time for fans to realise that they were not something to be laughed at, but were in fact very successful, creepy distortions of the human form.  They are disturbing in a similar way to the Menoptera, the Zarbi and the Optera, humans and insects combined in a way that is just plain wrong.  And that’s “wrong” in the best sense of the word.

Everything about the story reinforces that, from the vaseline on the lens to the choreographed movement.  It’s all there to throw us off-kilter.  The monsters are convincing for young children, and disturbing for older children and adults: the perfect embodiment of Doctor Who as family viewing.  Even the most cynical viewer should enjoy the story on the level of the amazing spectacle it offers.

This is one of those stories with so much going on that it almost defies being written about in a concise manner, so I’ll end with a list of odds and ends for anyone interested in some stray points of interest.

If there was ever a question of creativity in Doctor Who, one need look no further than the second season.  In the oft-maligned 5th episode, The Web Planet we get a glimpse of just how much creativity went into the show.

On the one antenna, it’s a 6 part story.  They have a habit of moving a bit like a slug.  Slow and often plodding, they lack the pace of the tighter 4 part stories.  (What about The Chase or even The Dalek Masterplan?  True they were as long or longer episodically, but they flitted about like a butterfly landing in one place just long enough to give us a taste, then taking off for another.  That gave it the feel of a smaller story contained within a larger, not unlike the season-long Trial of a Time Lord.)  On the other antenna, this was the early days when we had the incredible cast of Hartnell, Russell, Hill, and O’Brien.  That, coupled with a genuinely alien environment, offered the opportunity for some truly unique, and creative, viewing.

Take a look at the thought that went into giving us this story: to create the otherworldly effect for the planet Vortis, a distorted lens is used to create a blurred effect for this strange world.   (Similar effects had been done in shows like The Outer Limits, also in 1963, using petroleum jelly on the lens but regardless, Vortis looks almost dreamlike.)  There is an echo to the sound when the TARDIS crew chats, giving the impression of a vast, open space.  The imagery is very barren; a planet without an atmosphere to speak of.  Also, the music for the episode is created using glass tubes to bring about a more alien atmosphere.  There are also no other humanoid characters in the story, still further embracing the alien quality.  And those lifeforms we do encounter, the Menoptera, have specially choreographed movements and practiced voices (Vrestin) to further illustrate the strangeness.

Taken in the Doctor Who Experience, in Cardiff

And, love them or hate them, the Zarbi don’t look like almost any other race in Scifi TV at the time.  (The Outer Limits did also have ant creatures, The Zanti Misfits, but they had almost human faces!*)   The creators of Doctor Who made people look like butterflies and ants!  I always assumed the little laser blasters were pill bugs and the Animus itself, a spider.  (Rather appropriate, considering spiders really are abominations!)   Whether I’m right or not, doesn’t matter; it was the idea brought to life.  As a science fiction fan, this was something special.  Look back on this episode with an eye to understanding where the show started and it becomes evident why Doctor Who survived for 50 years!

As for the cast, there’s humor to the Doctor ruining Ian’s tie.  There are also some attempts at looking to the future when Vicki talks about spending time in school; 10 hours a week, with a machine.  So even in dialog, there’s recognition that the future will see many things changed from Ian and Barbara’s time.  One can make fun of the Zarbi that bumps the camera, but remember: the show had a very limited budget and even less time to film.  The fact that they pulled off such a story with such constraints is a testament to the love and creativity that propelled the show for over half a century.

Don’t crush this episode like a bug!  It deserves far more praise than one might at first realize!   ML

*Fun note about The Zanti Misfits.  In The Who Shop in Upton Park, London, they have a museum.  It’s a fun experience if you get a chance to go: https://www.thewhoshop.com/.  But in one of the windows, a Zanti Misfit actually makes an appearance!  Imagine my surprise!  So there is a little link between the two shows beyond both starting in 1963!

Read next in the Junkyard… The Crusade

2 Responses to The Web Planet