Snow and Ice in Doctor Who 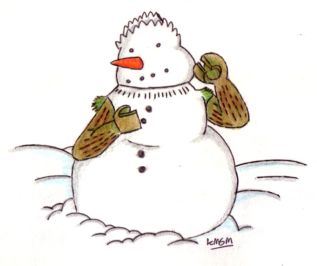 There is a duality in our relationship to snow.  On the one hand we associate it with Christmas (although it has stubbornly refused to make an appearance on Christmas Day where I live for my entire life), and that makes us go “awwww”.  On the other hand, it is dangerous, associated with freezing conditions, slippery roads, struggling to keep warm, and inhospitable parts of the planet: mountains and the polar regions.  Doctor Who is of course the perfect series to play with these kinds of mixed feelings, because its Christmas episodes still have to be scary and dangerous and Doctor Whoish.

The ultimate example of this is The Snowmen, which makes snow itself the enemy by animating it into a monster.   The Christmas Invasion instead subverts the snow at Christmas cliché, by having the ash of a burning spaceship substituted for snow.  The Runaway Bride and The Next Doctor are more traditional, although the Doctor has to create his own snow in the former, and then the running joke is used in the latter when the Doctor finally finds snow at Christmas, although he found just that in The Unquiet Dead, along with Charles Dickens.  Speaking of Dickens, A Christmas Carol continues the theme by making the absence of snow at Christmas symbolic of the fault with the world in which the Doctor finds himself, which is then corrected by Abigail’s singing unlocking the cloud belt.

The Husbands of River Song has a traditional Christmas in the snow backdrop, which by this point has become an incidental, shoehorned in tradition, but before this we have a run of Christmas specials where snow is made dangerous again.  So in The Doctor, the Widow and the Wardrobe, we have a portal to another world, which is snowbound and threatening, in The Time of the Doctor we have Weeping Angels concealed in the snow and then the Doctor and Clara’s ability to keep looking at them compromised by falling snow, and then in Last Christmas we have the monstrous crab creatures discovered in the snow.

This brings us to another running theme, particularly outside of the realms of the Christmas episodes: dangers lurking within snow and ice.  This utilises the idea of ice in particular being something ancient and therefore frightening, especially in the polar regions.  So we have the Ice Soldiers frozen in ice in The Keys of Marinus, the Cybermen in their icy tombs in The Tomb of the Cybermen, Ice Warriors discovered frozen in the ice in a future ice age in The Ice Warriors (ditto Skaldak in Cold War), the Krynoid seed pods in the Antarctic snow in The Seeds of Doom, and a danger lurking under the frozen Thames in Thin Ice.

Sometimes the snow is simply indicative of a dangerous landscape or the start of a dangerous adventure: the Plain of Pamir in Marco Polo, the icy planet the Monk gets stranded on in The Daleks’ Master Plan, Ribos, Necros, Iceworld, the Ood-Sphere – you get the idea.  Sometimes this can be simply the luck of the British weather, which happened with The Claws of Axos and Revelation of the Daleks.  Sometimes that works in reverse, with snow failing to make an appearance at all in a story that really should have had some and would have been greatly enhanced by it: The Abominable Snowmen.

Ice can also be symbolic of somebody being not quite right, or unwell.  In The Daemons we have an ancient barrow opened on a stormy night, and the Doctor is found frozen.  Planet of the Daleks goes for a similar trick, with the Doctor’s body temperature dropping and ice appearing on him.  Then we have Kane in Dragonfire, who can kill with just his icy touch; ice is a place where creatures with no human feelings can lurk: Kane, Ice Soldiers, Cybermen…

Which brings us to The Tenth Planet, perhaps the ultimate example of danger lurking in a snowy landscape.  We are going to be revisiting this adventure very soon in Twice Upon a Time and once again Doctor Who will present us with the dangers of the arctic and what might lurk there, including his own past.  Here we go again!   RP

Author of windowsintohistory.wordpress.com Co-writer on junkyard.blog Editor of frontiersmenhistorian.info
View all posts by Roger Pocock →
This entry was posted in Christmas, Doctor Who, Entertainment, Random Chatter, Science Fiction, Television and tagged Ice, Snow. Bookmark the permalink.