The Doctor, the Widow and the Wardrobe 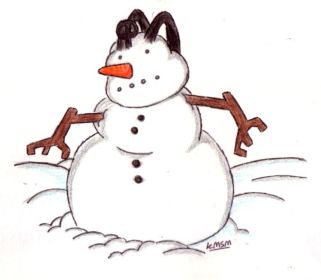 Just in case you didn’t get the literary reference this episode is going for, it’s writ large in the title.  I will be spinning off the Narnia references into a Six Degrees article tomorrow, and looking at the wider parallels between Narnia and Doctor Who, but obviously no article about The Doctor, the Widow and the Wardrobe is ever going to be complete without some discussion of the theme, as it is so intrinsic.  The TARDIS has always functioned in a similar manner to the Wardrobe, as a doorway to another world, but Steven Moffat has been the writer who has really focussed on that, writing his version of Doctor Who with strong reference to children’s fantasy fiction.  He is rather more inventive than just going for the obvious, and plays with the Doctor-as-Santa theme that tends to crop up in the Christmas episodes, with the Doctor bringing the gift of a present that contains a portal to another planet.

Note how rarely Doctor Who does this kind of thing, because if the Doctor can create or find and use portals to different worlds then it negates the need for the TARDIS.  It is also a step further towards the magical and away from the scientific, because a door that takes you instantly to another planet is rather more Clarke’s-Third-Law-ish than actually travelling there in a ship, however quick that ship is and whether or not it looks like a blue box.

But this episode is unashamedly going for the magical Christmas / children’s fantasy / younger demographic / Christmas family movie approach, more so than ever before, and there is nothing whatsoever wrong with that, unless you think your Doctor Who should all be in the same flavour.  The episode starts by dismissing the Russell T Davies approach immediately, with one of his entire Christmas episode plots condensed to a pre-credits sequence and then unconnected with the rest of the episode.  This is going to be a Moffat-does-optimism approach, complete with a rerun of “everybody lives!” without actually having the Doctor shout it out this time.  Where he does take inspiration from Davies is in the approach to tackling adult fears at Christmas, so if you think this is only going for the child demographic then sorry, that’s clearly not the case.

Both Russell T Davies and Steven Moffat have always been good at identifying an important shift in the viewer demographic for a Christmas episode, with some families with just children watching when it was the main series becoming families where everyone is watching.  Maybe not watching with a huge degree of concentration (which is why things need to be more accessible and with a broader dramatic style) but nonetheless there are always going to be some extra adult viewers who wouldn’t normally be taking any notice.  So this is a good time to grab their attention by playing on adult fears as well as childhood fears, which is what Doctor Who more commonly does.  So just as The Christmas Invasion shows us the fear of family members losing their minds and going all suicidal, The Doctor, the Widow and the Wardrobe has children wandering off into the woods on their own in bitterly cold weather, coupled with the theme of the loss of a partner.  The mix of Christmas and danger stands at the heart of most of the Doctor Who Christmas specials, and the Narnia parallel is a perfect vehicle to achieve this, with its danger-in-beauty approach.

The themes and parallels in Doctor Who tend to be more overt at Christmas than at other times, perhaps because less is expected of the viewers after a few drinks, and here we have the whole strength in motherhood thing thrown in without any attempt at subtlety.  But there is more going on than a simple female=strong/male=weak message.  More compelling is the idea that is wrapped up within it, that kindness and gentleness doesn’t equal weakness.

There’s nothing you could say that would convince me you’d ever use that gun.

And at Christmas, a time that calls upon children to be good through the year and receive rewards for that, this is a strong message.

There are parallels between the Doctor and Aslan which I will save for tomorrow, but there is also a lot more going on with his character here.  Christmas is a perfect time for the Doctor to be at his most eccentric Willy Wonka-esque, or even Mary Poppins-esque, turning up as a surprising employee at a house where children are living, turning it into a play park, trying to fix things including their parents, but without much of a grip on the realities of day-to-day life.  The Doctor as a Caretaker is a running theme of the Moffat era, and fits well with his need to fix things and basically take care of the human race, which he has spent much of his life protecting… which brings us back to Aslan…

This is it: the best Doctor Who Christmas episode to date!  Ten days until Christmas and we are covering the one Christmas special even my sister would love.  (This will be a testament to my writing style if I get her intrigued enough to view The Doctor, The Widow and The Wardrobe.)  And if you think that sounds a little too much like C.S. Lewis’s The Lion, The Witch and The Wardrobe, you’re not wrong, but that’s completely intentional.  The TARDIS has often been thought of as a wardrobe and the magical land that the children find themselves in is right out of Lewis’s classic.  (I’ll come back to the Doctor as the lion in another post.)

I related to this story right out of the gate.  When we were younger, I worked hard to get my sister the boxed set of The Chronicles of Narnia. She was little more than a baby at the time so even in title, I connected to this story right away.  Then there was Madge, the stay-at-home mom raising the kids, like our own mom.  And Cyril and Lily, Madge’s children.  They are a couple of years apart in age, not unlike my sister and I.  (Yeah, I’m older than my sister, but I’m man enough now to say that as a child, boys are never that mature, so this connection probably accurately reflects reality too.)   And there’s the hero-dad who is sent to war to save the day; a quality my own father did in the military and the police force.  During my first viewing of this story, I loved it.   Over the last few years, since my dad passed, it means even more to me.  It’s truly a magical episode and embodies what Doctor Who does so well better than almost any other episode.  This is what happens when the Doctor decides to bring Christmas to a troubled family in a way only a madman in the box could.  It feels like Christmas!

Matt Smith is utterly perfect as the crazy, manic Doctor, able to jump on hammocks and slip right off the other side…  He’s a kid at heart and knows how to make a child happy.   He is also a caretaker bringing a box of delights that leads to “Narnia”.  The box may not actually lead to Narnia but rather Androzani Major.   (And even that was a great throw-back for me.  Caves of Androzani was the first regeneration I ever witnessed.)  Smith has youth on his side and that is a major characteristic of his Doctor; he plays it for all its worth in all the right ways.  To see him befriend children and take them on a magical adventure is priceless.  While I love science fiction to be serious and dark, Doctor Who can be light and loving and fun and wonderful and all-around awesome.  And Smith brings in the “awesome” when he shows Cyril and Lily the magical place inside the box.  To a certain extent, this is what all Christmas gifts are: boxes of wonder and delight that a child can’t wait to explore.  The Doctor just ups the magic by being himself such a magical character.  He even decorates their bedrooms in such an off-the-wall fun way, it’s impossible not to love his bubbly attitude.

In typical Doctor Who fashion,  the children go missing while exploring and they end up directly in harm’s way.   And it’s up to mom to save the day!

Madge is a quirky, loving mother who has to deal with a challenging Christmas in a house they have to stay at during World War II.  When her kids go missing, she’s willing to do anything to save them.  And what wouldn’t a mom do to find her children?  Take this piece of dialog, which is delivered so marvelously:

Droxil: … there’s nothing you could say that would convince me you’d ever use that gun.
Madge: Oh really? Well, I’m looking for my children.

The power of parenthood and the love a mother has for her family is the driving force behind the episode!  It’s impossible for me not to think of my mom, my sister and my wife.  They would each travel to other stars to save their kids.  Smith’s Doctor makes it possible and helps make the point when he recognizes the significance of “the mothership”.

And Gods of Ragnarok forbid that I hear anything about some agenda… when the episode first aired, I remember reading criticisms about some “girl power” agenda in this episode, but who cares?  If it’s there, it’s there – I’m watching for a good story and Time Lord knows, it was there!  If the writer were in the mood to be all “girl power”, that’s his prerogative.  It would be like an episode that features abstract art; we shouldn’t be upset because of the “abstract art agenda”.  I don’t have to love abstract art but I can still enjoy the episode for what it is.  (Now pointillism, on the other hand….)

I’ve said on many occasions that Doctor Who is a show with heart.  Stephen Moffat said this after the end of the 2017 The Doctor Falls:

Doctor Who is a big-hearted, optimistic show that believes in kindness and love and that wisdom will triumph in the end.  I don’t believe it’s the kind of show that says there are bitter, twisted, nasty endings because it’s not. It’s not gritty – it’s aspirational. It says, ‘It can work. And wisdom and kindness will triumph. And love will always come through in the end.’

The Doctor, The Widow and the Wardrobe embodies all of that in one happy, heart-warming Christmas story.  What more could we want on Christmas day?

Your mother is flying a forest through the time vortex. Be a little impressed!

Read next in the Junkyard… Asylum of the Daleks

Author of windowsintohistory.wordpress.com Co-writer on junkyard.blog Editor of frontiersmenhistorian.info
View all posts by Roger Pocock →
This entry was posted in Art, Christmas, Doctor Who, Eleventh Doctor, Entertainment, Reviews, Science Fiction, Television and tagged Matt Smith, Narnia, The Doctor the Widow and the Wardrobe. Bookmark the permalink.

1 Response to The Doctor, the Widow and the Wardrobe