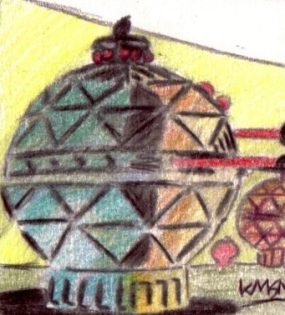 When the Doctor switches on the Time-Space Visualiser, it displays some historical characters, a performance by the Beatles, and then a group of Daleks on their way to kill the Doctor. This extraordinary coincidence really sets the scene for the whole story; it is ridiculous but great fun.

The Time-Space Visualiser is basically a handy crystal ball within the plot that predicts the future by showing the past – the scanner itself will fulfil the same role at the end of The Moonbase but with the addition of the actual future rather than an extrapolation of what will happen from what has recently occurred somewhere else. The Visualiser’s abilities are restricted to the past from the Doctor’s point of view which makes no sense unless it is somehow linked to the Doctor’s mind (and it’s not – they nicked it from the Space Museum).  This cleverly sidesteps the whole can of worms of a fatalistic universe that it would otherwise have shown.  This would have made for an interesting story (compare the 1960 Twilight Zone episode A Most Unusual Camera, where everything shown in the pictures is in the future and therefore has got to happen), just not the story that is being attempted here, which is simply the Doctor running away from his enemies.

So although the comedy approach to the Daleks cheapens them, they still retain the element of fear, simply because of the reaction of the Doctor.  He runs away.  This is not like him, and certainly not like he has behaved recently.  Compare this to how he gleefully brings down an entire Earth occupation in The Dalek Invasion of Earth.  The Daleks being able to time travel adds another dimension of threat to them.

It is fudged a little because Terry Nation’s approach is an odd version of  time travel.  The Daleks gradually “catch up” but are never able to arrive ahead of the Doctor. Their time travel is somehow relative to the Doctor’s, akin to a road chase.  This is basically a car chase movie that takes place on a grand scale.  It’s a bit like how the Master and the Doctor keep meeting in the same order, something that has only really ever been subverted with River Song.  But the plot convenience shouts out at us much more when it takes place from within a single story.

The locations the TARDIS visits are variable in their level of appeal to the viewer. The method of introducing at least one new set in virtually every episode was previously used in The Keys of Marinus, and again puts a visible strain on the budget; you have to appreciate the bravery and ambition, that anyone could think it was possible to get this story on screen on Doctor Who’s budget.

There is a simplistic approach to the choice of planets, which tend to get treated in Doctor Who as giant globe countries anyway, with one planetary society and government… and also climate. So Aridius is defined by being arid. Mechanus has mechanical inhabitants, and a lot of jungle with killer plants. Terry Nation likes those.  When the Doctor and his companions arrive at a new location, they don’t actually help people or do much good, which is where this story is lacking in comparison with The Keys of Marinus, which at least makes some attempts in that direction, and makes The Chase feel like a lazier plot.  Other than rescuing Steven (which happens incidentally) they are just trying to get away and keep trying new locations until they find a race that’s willing to actually fight the Daleks on their behalf rather than just be exterminated by them. The Doctor keeps talking about finding a location to fight them, but he’s not fooling anyone.  It’s an understandable but selfish agenda, and the side effect of getting people killed along the way is ignored.

We have already looked at Journey into Terror in a separate Halloween special article, but it is worth mentioning here that the entire episode is one of the many fourth wall wobbles in the story.  This is an approach that will be utilised far more strongly for the middle section of The Daleks’ Master Plan, but here we have the use of the Time-Space Visualiser to see what is happening in Doctor Who next (the other things it shows are clearly theatrical or televisual, and therefore so are the Daleks by association), and also Morton Dill asks if they are filming a chase, which the Doctor confirms. The Daleks even talk as if they are speaking for our benefit, complete with “Earth minutes”, which can only be a viewer-centric choice of words.  Even the book Ian is shown reading flags up the kind of sci-fi world we are inhabiting for the next six episodes.

But the aspect of the story that takes us right out of the narrative completely is the failed attempt at showing a robot duplicate of the Doctor, although this is completely unintentional.  If Edmund Warwick’s performance had been properly thought through so that he was only ever playing the duplicate, and in fact always played the duplicate, it could have been explained away as a bit of dodgy Dalek tech, but there is no consistency and Hartnell does the closeup shots.  I can’t condemn the story for this because the director was attempting something horrendously difficult at a time where even overdubbing was impossible (Hartnell’s lines had to be played in live over the top of Warwick miming) and I love to see ambition in Doctor Who, but it is all rather unfortunate to say the least.  Although it is not well realised, the concept is interesting.  For example, the robot Doctor tells Ian to kill the real Doctor with a rock, which is reminiscent of the Doctor actually trying to kill somebody in that manner in An Unearthly Child (presumably unintentional, but it works nicely) until Ian stops him. This shows how far he has developed as a character that only a version of him that is intrinsically wrong would think to do that, even to his enemy.

In the end the Doctor is just lucky and the Mechanoids do the job for him, leaving us with a lingering sense of unfinished business.  Now the Daleks have time travel this can happen again at any time.  The TARDIS is no longer quite the safe haven that it was.  The Daleks are also developing a habit of somehow separating the Doctor from his companions by accident, which happens temporarily with Vicki and permanently with Ian and Barbara, and we have already seen Susan kicked out of the TARDIS in The Dalek Invasion of Earth.  The Doctor will continue to pay a heavy price when he encounters the Daleks again…   RP

Ever go to your favorite restaurant, look over the menu, see about 5 different things that all sound good, and when the waitress comes around you order… the same thing you always get?  Why is that?  Probably because spending money on something you’re not certain of, isn’t a good investment.  You know you love that one thing, but everything else may sound good but you just don’t feel the confidence to order it.  It would be so much nicer if you had the option to do a sampler.  Like money, time is also a commodity; one many of us lack even more than cash!  To try a series you’re not sure of is an investment in time that may or may not pay off.  Luckily, the TARDIS understands and gave us: The Chase.

The Chase is Doctor Who’s answer to a sampler.  In fairness, it’s not the first; that honor goes to The Keys of Marinus, but that had a linking theme and separated the companions to the extent that coming into that one mid-way would have left most viewers a little confused.  While The Chase has the Daleks pursuing the crew from place to place, there’s little to hold the story together that would require any specific knowledge to enjoy an individual episode.  Vicki does get separated, but for such a brief period that it doesn’t impact the story.  We’ve already examined part 4, Journey into Terror, during our month long look at horror leading up to Halloween and that illustrates just how well this story lent itself to easy dissection.  This sampler also gives a casual viewer a taste of the “goodbye” that started with Susan’s departure earlier in the season.  This time, Ian and Barbara move on, leaving the Doctor traveling with his surrogate granddaughter, Vicki.  And we’ve already seen just how marvelous that relationship was.  A vast difference to the one he had with his actual granddaughter.  Only part 5 (the unfortunately titled The Death of Doctor Who) and part 6 are truly connected in any meaningful way.  Thus, this 6 part story, plays out like 4 softly linked but individual stories and a two part finale.  It works well because by changing it up every episode, there is no time to get tired of any segment.

One very interesting thing that came about from this episode was an early piece of internal continuity.  Vicki comments that London was destroyed during the Dalek Invasion.  In the early years, there was little to no internal continuity within the series.  This was a direct reference to an event from earlier that season, of which Vicki was not a part.  Her knowledge was from the future when 2164 would have been historical.  There are other attempts at continuity during this story too, but none so detailed.  And we were shown some fantastic writing:  the Daleks had attempted to replace the Doctor with a replicant (an idea that comes back with the Daleks many years later).  During the robot Doctor’s involvement with his companions he refers to Vicki as “Susan”.  This was brilliant because the Daleks were unaware that Susan was no longer traveling with the Doctor.   It’s subtle and might even escape ones notice, but it’s worthy of comment.

Unlike The Dalek Invasion of Earth, this story moves far faster and introduces us to Steven.  But more importantly it says goodbye to the first two companions.  Barbara and Ian are returned home two years after they left.  Presumably they have a good story ready for when they return or, as I joked once before, they are coming back to some serious bills and other problems.  Doctor Who may be fiction but it has an internal sort of life of its own and I like to believe that it is a happy one for most of the Doctor’s companions.  So I imagine that somewhere in his own future, maybe around Matt Smith’s time, the Doctor goes back to right after he dropped Ian and Barbara off, maybe to Coal Hill (where they were teachers) and gives them such a sterling recommendation that they are allowed back and they transition smoothly into their old lives.  (Maybe even paying some of their bills in the process!)  And if they ended up together, I’d be happy with that too! (Sappy, sure, but I always felt they were a good match and should have settled down together!)

This isn’t the first and it certainly won’t be the last of the “sampler” format, but it is one of the best.  Farewell Ian and Barbara Chesterton!

(Yeah, you know you wanted it too!  At least, that’s what should have happened!)   ML

9 Responses to The Chase