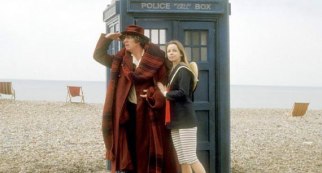 Look!  We’ve been completely reinvented.  This is now a totally new blog, a complete departure from what it was last week, and nothing will ever be the same again… because the writing is BLUE!

Sometimes a change is not as dramatic as you might think.  There has been a lot of chatter over the years about a reinvention of Doctor Who that starts here but that idea is largely the creation of John Nathan-Turner and his hype machine, which started at this point.  The title sequence and music have changed and do feel much more modern, in that 80s way of modernising things that basically boils down to neon and synthesised.  This does seem like a big change, particularly the theme music which has never been tinkered around with very much before this point, but it is superficial in terms of what Doctor Who actually does as a television programme.  Apart from that it is largely business as usual this season, and there have been much more fundamental and groundbreaking changes to Doctor Who before this point (The Power of the Daleks, The Rescue, Spearhead from Space).

The season will play out with mainly been-there-done-that Doctor Who stories: aliens in disguise, monsters rising from the water, a story with a classic horror influence, the return of an old enemy.  The main difference once you get past the opening titles actually comes from the script editor rather than the producer, who seemed to think he was grounding Doctor Who in real science more, while really applying real science terms to the things that Doctor Who always does in any case.  In other words, the technobbable is piled on thicker, and the demographic skews towards the teenage.  It will take 20 episodes before any of the line-up that were in place at the end of the previous season will depart, and as they have been around for a while to say the least, and the Doctor himself is in his seventh year, changing the cast during this season was hardly doing something brave and new.  So as reinventions go, it’s quite a soft one.

Looking at this story in isolation, we have some very familiar themes: a post-war world suffering the after effects;  scientists viewed with suspicion as something destructive and dangerous; xenophobia; the Doctor falsely accused of a crime; accelerated aging; hostility between races inflamed by small factions; aliens in disguise, cloning.  David Fisher certainly packs a lot in, but there’s nothing there that really shouts out “this is brand new!”

What Fisher actually does, then, is to take a bunch of well-worn themes and do something interesting with them, and this in itself actually feels quite new.  In particular, the use of scary alien invaders as merely a criminal group from a non-hostile race is a much more intelligent approach to the theme of xenophobia, and something Doctor Who does extraordinarily rarely.  Alien races tend to lack the variety that is accorded on-screen to humans.  In fact, the whole plot is driven by dangerous criminals from two largely non-hostile races, and the most dangerous turns out to be the more humanoid one, which we would normally expect to be the victim race.  Brock and the West Lodge are largely a B-plot and never seem to be the credible threat here, whilst also playing into the A-plot very effectively, with the Foamasi the target of Pangol’s xenophobia.

There is a lot of other interesting stuff going on here as well: the idea of a dying race and how they approach the inevitable – do they fight against it, face the end with dignity, abandon their principles?  Then we have the idea that an alien who is unable to communicate must be a dangerous monster, until he gains the ability to speak in the same language as everyone else and the threat evaporates.

Less successful is the long panning shot at the start.  If you are going to attempt an homage to Death in Venice then you aren’t really going to achieve that with an empty beach.  I wonder how many viewers switched off at that point.  There is also a sense here of Tom Baker hanging on for one year more than he should have done and, with a lot of the humour taken away from the character he is playing, the series starts to lose its appeal to the family demographic.  The downturn in the viewing figures at this point is startling.  Episode Two drops Doctor Who immediately out of the Top 100 in the weekly chart, and it will be nearly four months before it sneaks back in again.  To put that in perspective, the last time Doctor Who was not in the Top 100 was An Unearthly Child.  Viewers had simply never abandoned Doctor Who to this extent, and arguably would never do so again.  Luckily a young TV vet was waiting in the wings, and he was going to bring his own fan base with him.   RP

Looking back on The Leisure Hive, it’s amazing how dated it seems.  Back in 1980, I was 8 years old and my baby sister was just in the world 8 months by the time this episode was broadcast and, although I would not see it for a couple more years, it was still high-tech to me.  But now, looking at it through adult eyes, it’s amazing how an episode like this could ruin an otherwise happy image from one’s childhood.  (Luckily, other stories made up for it, but it’s still an unfortunate effect.)

The story opens up leisurely enough, ironically, with the Doctor kicking back on a beach.  While it does nothing more than set the stage for their trip to Argolis, it’s a surprisingly enjoyable scene… until it goes horribly wrong when “super-computer” K-9 decides to chase a beach ball into the water, severely damaging himself and giving the writer (David Fisher) a convenient way to leave K-9 out of this story.  By my estimation, this was about the time that Tom’s era was becoming a bit long-in-the-tooth.  (In fairness, there’s record of the relationship between Tom Baker and costar Lalla Ward being at a low and it probably impacted the filming; some things are hard to hide!)

If the opening is merely the prelude, just how bad does it get from there?  If the infamous detractor, Mary Whitehouse, had an issue with the Doctor being held under water for a week (The Deadly Assassin), she must have aged years when she saw him dismembered at the end of part one of The Leisure Hive.  A week later, that shock is resolved only to see the Doctor aged to Mary’s own apparent age and looking not unlike Moses.  So far, episode one and two end with what J. J. Abhams might call “a mystery box”.  He steps into the mystery box and anything can happen.  “Wearing a bit thin”, indeed.  The same method should not be used twice in the same story, let alone 2 episodes apart.

But bad as that all is, part three gives us a different, and dare I say, laughable cliffhanger.  It would appear that the Foamasi, a race of bug like creatures, have seen one too many episodes of Scooby Doo.  If it weren’t for that pesky Doctor… They are able to wear human disguises, with masks that can fit impossibly large heads.  Clearly they are shopping in the same Universe Mart that the Slitheen do.  There’s no way to fit the Foamasi head into a human body…  I’m sorry.  Maybe the cinematography of the time is to blame, but this is like the family cat really being a horse wearing a disguise!   Sorry, no way to make that believable!

The laughs don’t stop there.  The “evil Foamasi” are a part of a group called “The West Lodge”.  If that name doesn’t have an ominous ring to it, I don’t know what does!  (If only Twin Peaks came first, I could blame David Lynch.)   And of note, the Randomizer, the device which kept the TARDIS randomly jumping from one place to another gets removed.  The problem is that it changes all of nothing from the way classic Doctor Who was told because the Doctor never knew where he was going anyway.  Every new story was “randomized” anyway!

As weak as I find this episode, it could be a product of its time.  If David Fisher were to get a redux version of any of his stories, this one might work quite well with modern special effects.  Normally, I’m the first to say we should not judge classic Doctor Who by the visuals, but this story relies so heavily on effects that not having the budget really hurts it.  It’s less thoughtful and more reliant on visuals that just don’t hold up.

On the flip side, the music is quite good.  The opening theme got an upgrade (well, depending on perspective) and the main track featured in this story featured significantly on a number of Doctor Who vinyl albums of the time.  Rightfully so too; the music to the episode was quite good.

It is truly amazing how much ones tastes can change over time.  I still have fond memories of the episode, but it probably has changed from genuine surprise and enjoyment to a bit of adult laughter at a fairly weak attempt to bring Doctor Who into the modern era.  Still, we have to start somewhere and starting a new thing can be stressful.  Might as well start as leisurely as we can.  Hi’ve got plenty more bad puns where that came from…  ML

Read next in the Junkyard… Meglos

2 Responses to The Leisure Hive