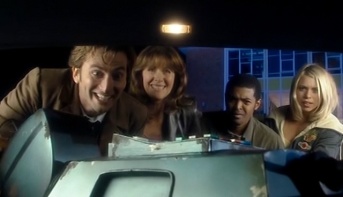 School Reunion has it all, and stands as a fine example of how to appeal to the established fans and the new viewers of Doctor Who at the same time. The Krillitane are there to entertain the kids, whilst the adults can revel in the return of Sarah Jane and K9, two of the best-loved and well remembered original companions.

Elisabeth Sladen was always magnificent as Sarah Jane, and she has lost none of her power to charm and captivate an audience. It is remarkable how effortlessly she steps back into character after so long and proves that her wonderful rapport with both Jon Pertwee and Tom Baker was due to great acting and genuine amiability, as it exists instantly with David Tennant as well. The look on the Doctor’s face when he first sees Sarah is magical, and absolutely genuine. As a great fan of Doctor Who himself, I can imagine this came naturally to David Tennant. It is a moment that sends a shiver down the spine.

The return of Sarah means that the episode has to tackle the issue of why the Doctor didn’t ever go back to see her, and his excuse is understandable but doesn’t reflect especially well on him.  However, Doctor Who often works best when it presents the Doctor as a flawed character.  In fact, this is the only approach really that makes sense of who he is and what he does.  Here’s what he has to say to Rose about it:

The Doctor: I don’t age. I regenerate. But humans decay. You wither and you die. Imagine watching that happen to someone that you…
Rose: What, Doctor?
The Doctor: You can spend the rest of your life with me. But I can’t spend the rest of mine with you. I have to live on, alone. That’s the curse of the Time Lords.

To be prosaic about it, this all sounds a bit like a human deciding never to have a dog because of the heartache of losing it.  This is the only comparison we can make from our own lives and it leads us to the point where we know that what the Doctor says makes sense, but we also know that he is completely wrong about it, because the relatively short period of happiness is completely worth the much shorter but not insignificant period of grieving at the end.  So ultimately the reason this doesn’t reflect well on him is that we can see it for the excuse that it is.  The length of time the Doctor could spend in a real relationship with somebody like Rose would be short in terms of his whole life but not an insignificant length of time (a human lifetime marriage would be longer than most of his incarnations survive), but he simply doesn’t want to do it.  He is happier being the eternal bachelor and trading in his young female companion for another younger female companion before the aging process can kick in.  He is stuck in a centuries-old mid-life crisis.

This is all very soap-opera-ish, and that’s no criticism.  Doctor Who does that well, and using that term is really just referring to real human issues.  All the “missus and the ex” stuff is about Sarah transitioning (seamlessly, it has to be said) into the brave new world of soap opera Who, having previously existed only in a version of Doctor Who that shunned all that.  This is why her abandonment had to be tackled.  It was a symptom of a version of Doctor Who that just didn’t deal with those kinds of issues.  Companions were written out with the minimum of fuss, barely drawing attention to any kind of emotional connection with the Doctor.  Doctor Who can’t be like that any more and for Sarah to be a part of the new Doctor Who universe her ending has to be rewritten (and remember, this was an ending, not an intentional pilot for The Sarah Jane Adventures).  Mickey has a different trajectory, following a path that Rose has already taken, which is the flipside of the one Sarah has to take.  He comes squarely from the world of soap opera, defined from the start in terms of his broken relationship with Rose.  He has to find a way to fit into the sci-fi world of Doctor Who, and K9 shows him the way.  He is the “tin dog”.  It is an inauspicious integration into the regular team, but it is a starting point and only that.

The Doctor’s reason for not committing to his companions in the long-term also plays into the “lonely god” theme that has been explored in every episode this year so far.  The Krillitanes also want to become gods, showing what kind of corruption that path can lead to.  Finch respects the Doctor as if he is on the same curve towards ultimate power, and offers to share divinity with him.  Tellingly, the Doctor appears to be tempted by the offer, because it involves being able to save people on a grander scale, until Sarah intervenes and puts things in perspective for him.  This ongoing theme will be returned to again and again over the next few years.

School Reunion gives Sarah Jane a proper goodbye, which is what she wants from the Doctor, and it’s a real tear-jerker. It seems pretty final, but luckily for us this was just the beginning of another wonderful journey…   RP

Friends of the Junkyard, please attend carefully… class is now in session.

School Reunion saw the return of Sarah Jane Smith.  What more could you ask for?  To add a good story was icing on the cake because the bulk of the cake was seeing how the Doctor was going to deal with an old friend meeting a new.  Outside of very rare special occasions like The Five Doctors and The Two Doctors, this just didn’t happen!

Following Tooth and Claw and preceding The Girl in the Fireplace, School Reunion was stuck between two fantastic stories.  The former is a howling good werewolf story and the latter is marvelous in the best timey wimey way.  But if School Reunion has a saving grace, it’s that is has heart!  I say that phrase a lot so let me clarify.  Nowadays people say it has a lot of “feels”.  To sum that up neatly, it can make you cry.  Be it tears of sorrow or tears of joy, it was hard to keep the tears at bay.  And let’s call it like it is: the actors bring this to life; they sell it!  The audience has a few laughs out of Mickey’s girlish scream, but he zings it right back to the Doctor with that perfect line “The missus and the ex. Welcome to every man’s worst nightmare.”  Noel Clarke may be the comic relief (“Oh my God!  I’m the tin dog!”), but he does it in a very believable way.  Billie Piper’s Rose is also quite funny with her arguing with Sarah Jane.  (“…He’s never mentioned you… sorry.  Never”).  And there are good villains.  Anthony Stewart Head, most well-known for his role in Buffy the Vampire Slayer, positively exudes evil.  He makes a great villain.  (And I love when the villain knows of the Time Lords; it adds a sense of the epic when that happens!)  “You appear to be something… new.”  The Krillitane are weird and wonderful….

But it’s Liz Sladen and David Tennant together that sells the story.  Let’s remember, Tennant never actually worked with Sladen before.  The Doctor and Sarah were originally Baker and Sladen.  But you wouldn’t know it based on the way they play off of one another.  Tennent embodies everything that made the Doctor that immortal character that he is.  That simple greeting in the basement: “Hello Sarah Jane.”  Having them reminisce about being left behind, in the wrong town… that’s fun and establishes a link with that farewell story, The Hand of Fear.  And that brings us to Sarah Jane Smith herself; the first companion for me when I started watching Doctor Who.  I loved Sarah and often said if there were one former companion to come back, I’d love it to be her.  And lo and behold…  Sarah was the Doctor’s best friend and this story just continues where they left off.

Then to see her enter the TARDIS was outstanding.  I am so glad they left time for that after the conflict was resolved.  I loved when the episodes had an epilogue and this was a perfect ending.  But when K-9 turns back up, I had all to do to keep it together.  Amusing anecdote: fellow contributor Paul Roeber was watching this one on a day when we were in the office super-early.  When K-9 made his appearance, I heard Paul gasp and I knew he was struggling not to cry in front of me!  I say ‘Bravo, sir… Bravo!’  (He claims to read our posts… let’s see if he comments!)

What is really at the heart of the episode is something that may be a little too close to home for us fans.  The Doctor tells Rose “you can stay with me for the rest of your life, but I can’t stay with you for the rest of mine.”  He calls it the curse of the Time Lords.  And he’s right.  Doctor Who will outlive us all.  We are like companions and one day, we won’t be here any longer, and he will be out there, saving universes.  I hope he remembers us as we will always remember him.  (I hope there are TVs in heaven.)

This episode is unique too because its weakness also happens to be its strength.  The very thing that makes it great is the connection with the past; the link to the original series.  But for new fans, this ran the risk of alienating them; they had no investment in this Sarah Jane Smith character.  It was a bold move for a show that was only at the start of its second season.  But Doctor Who is nothing if not bold!

That’s the bell.  Class has ended.  And remember:

Read next in the Junkyard… The Girl in the Fireplace