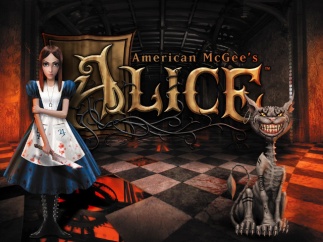 The fairytale is over.

Yesterday we looked at the 1966 BBC television adaptation of Alice in Wonderland, probably the only version to understand the source material.  It is a stunningly weird interpretation of Alice but in 2000 a PC game adaptation took the surrealism and turned it up to eleven.  I loved this game when it first came out and played it right the way through.  The game play was fabulous and the graphics amazing for the time.  For many gamers it was probably a bit of a frustrating experience because it needed a good system – I built my own computer around this time to cope with games like this, without spending a fortune on an off-the-shelf solution.  Ironically now that computers have caught up with the demands of the game it won’t function on later version of Windows, although you can find a patch for it if you search around.

American McGee was a level designer on games such as Quake before moving to EA Games as a creative director.  He had a shockingly tough time of things as a child, and Alice was his chance to use the negativity from his past and work that into a twisted version of Alice, which is a game that is both disturbing and beautiful.  It takes the premise of Alice as an adult in an asylum, dreaming of Wonderland, which has now become a dangerous place.  Surviving Wonderland and defeating the Queen of Hearts takes on a special significance because it is the only route back to sanity for Alice.

The cause of her insanity is a fire that killed her family, something that her enemies identify as a weakness and play upon.  Like the Doctor post-Time War, she has survivor guilt:

Everyone I love dies violently— unnaturally. I’m cursed. Why go on? I’ll just hurt others…

There are actually a ton of shared themes with Doctor Who which makes sense as Doctor Who takes so much inspiration from childhood fantasy fiction such as Alice in Wonderland.  But, like Doctor Who, this version of Alice actually develops ideas from the wider world of fiction and blends them with horror movie tropes.  If you are a Doctor Who fan (and you probably are if you are reading this blog) then some of the following might seem familiar:

This is a blend of children’s family fiction and horror.  So is Doctor Who.  The difference is that Doctor Who has to do that within the confines of family viewing, whereas American McGee’s Alice could go all out with it.

The game came with an illustrated booklet, a work of fiction written from the point of view of a doctor in the asylum, in the form of diary entries.  It is a magnificent piece of work before you even get to the game.  One day somebody will see sense and make a film version of Alice like this.

A sequel followed in 2011: Alice Madness Returns.  I only found out about it recently, so another surreal adventure awaits…   RP

Read next in the Junkyard… Alice Through the Looking Glass (1973)

Co-writer on junkyard.blog. Author of windowsintohistory.wordpress.com. Editor of frontiersmenhistorian.info
View all posts by Roger Pocock →
This entry was posted in Doctor Who, Entertainment, Games, Random Chatter, Reviews and tagged Alice in Wonderland, American McGee's Alice, PC Games. Bookmark the permalink.