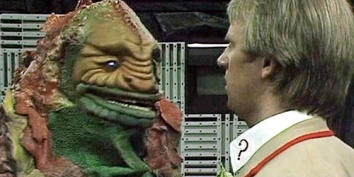 Eric Saward’s first Doctor Who script is a return to a format that Doctor Who had explored surprisingly rarely up until this point: the pseudo-historical.  The first time history was combined with an alien element was The Time Meddler, and although this was clearly a brilliant format it was not really repeated until The Time Warrior.  Then we had The Masque of Mandragora and The Talons of Weng-Chiang, and that was about it.  A few other stories skirted around the idea in different ways, such as The Evil of the Daleks and The War Games, and there are also a few stories that popped back into very recent history: The Abominable Snowmen, Pyramids of Mars, Horror of Fang Rock.  But there is really a strong link here with just The Time Warrior and The Masque of Mandragora.  So we have an occasional treat.  Strange as it may seem, the aliens-mess-with-history plot is almost entirely a modern phenomenon.

So unless you go right back to the Hartnell era, with its pure historicals, the only era with reasonably frequent forays into the past so far has been the Hinchcliffe/Holmes seasons.  And Saward seems to be actively harking back to that era, with his comedy favourite character, Richard Mace.  Whereas Holmes favoured the comedy double act, Saward simply pairs a comedy character with the Doctor.  This leaves the Doctor as the straight man, which is a shame, because it highlights how much the fun has been sucked out of the role since John Nathan-Turner took over as producer.  Peter Davison is a brilliant comedy actor and it is a shame that he didn’t get a chance to bring much of an element of that to Doctor Who until Time Crash.

Richard Mace is the only real supporting character in the story other than the nameless Terileptils, but with a TARDIS team of four there is not a huge amount of space in a story for a lot of character establishing.  At least Mace has an interesting journey here, as the likeable, cowardly rogue who comes good in the end, going from highwayman to fireman, and even getting offered a chance to become a companion.  As fun as that would have been, it’s hard to imagine how a team of five could possibly work!

There are some interesting themes running through the story.  There is the concealment of true identity, working both to make things more and less frightening.  The discobot dressed as a grim reaper is fabulously 80s.  Then we have the Doctor’s involvement in his second Great Fire, and he is just as unmoved by this as he was when he previously strolled away from Rome giggling at what he had just done (The Romans).  In fact, the Doctor’s moral core seems to be largely absent here, in the first hint of how his characterisation will descend into moral ambiguity over the next few years.  Have a look at the following exchange between the Doctor and Mr Nameless Terileptil:

Doctor: All this carnage isn’t necessary.
Terileptil: It’s survival, Doctor. Just as these primates kill lesser species to protect themselves, so I kill them.
Doctor: That’s hardly an argument!
Terileptil: It’s not supposed to be argument! It’s a statement!

This is what’s so frustrating about the Fifth Doctor at times.  Look how limp his words are.  He is so weak that he loses the moral high ground.  When the bad guy gets the punchline in an argument like this, there’s something going seriously wrong with the script writing.  Speaking of which, we can’t ignore the sonic elephant in the room any more.

There are two strong arguments about the destruction of the sonic screwdriver, and the problem is that both of them are exactly right.

Argument 1: it encourages lazy script-writing because the Doctor can get out of problems by using the sonic instead of his brains.  The problem is most obvious in the Russell T. Davies era, when the sonic starts to be used more and more to do anything and resolve any plot.  Basically it’s a magic wand.  At its worst, it’s a gun.

Argument 2: the lack of the sonic is actually what encourages lazy writing, because it gives the writers the excuse to lock the Doctor up and keep him away from the plot until it is time for him to interact with it and save the day.  He needs the sonic to stop a door getting in the way of the Doctor getting on with the story.

Of course, that last point has a very good counter-argument, in that there are exceptions introduced to the sonic getting the Doctor out of confinement (e.g. it doesn’t work on wood), so writers find a way to do that lazy thing of locking him up, sonic or not.  And I think that gets to the route of the problem in this debate that doesn’t have a solution.  Because if you don’t want writers to be lazy, taking their toys away is a decidedly odd way to do this.  JNT systematically removed everything that could stop the Doctor from being centre of attention and solving things with his brains: Romana, K9, and now the sonic (he oddly then teamed up the Doctor with two geniuses but that’s getting off the point).  But that’s ridiculous, because the whole point of employing a script editor is so lazy writers can be told to stop being lazy and fix things like that for the second draft.  So if you consider a writer is using the sonic in a lazy way when it would be better at a particular point in a script for him to be all Doctorish and clever, just tell the writer that.  The destruction of the sonic is JNT’s typical use of a sledgehammer to crack a nut, the same approach that resulted in his attempt to remove all humour from Doctor Who when he perceived an excess of it, instead of simply telling his staff to dial it down a bit.  The Visitation is a lot of fun, but it’s another step on the road to a peculiarly watered down approach to Doctor Who.   RP

I know what you’re thinking.  Considering this review follows The Masque of the Mandragora, you’re probably thinking that we will do a series on the Doctor’s planned beheadings.  Alas, no, that’s not the idea.  We’re just taking some pseudo-historical stories and enjoying them.  The Visitation was viewed as one of Davison’s best episodes though I never quite felt it was up to that level.  In fact, I’d argue that there’s a lot wrong with The Visitation. For instance, Tegan wants to get back to work so badly that when the TARDIS doesn’t land at Heathrow, she storms out of the TARDIS.  Then, upon smelling sulphur, they do what anyone wouldn’t.  They go seeking the source.  Adric is unable to open “stiff” windows.  Tegan uses a gun as the world most unwieldy broom to beat a Terileptil rather than even attempt to fire it.  The Doctor gives Richard Mace an alien keepsake to totally disrupt archeologists for years to come.  Nyssa blows up a robot in her bedroom.  Said robot looks like an escape from an 80s music video, domo arigato, very much!

But all that aside, it does have some redeeming things that do make it a good story.  I only say the above because I don’t see it being his best story.  But let me be honest, I knew very little about the Great Fire of London in 1666 but this episode piqued my interest and I actually became fascinated by it.  This was one of the perks of the historical stories; they could raise awareness of things kids would learn about in school and make it all very interesting.  Then there’s Richard Mace, played by Michael Robbins, who I remember as Jarvis in The Pink Panther Strikes Again.  My word, that man has one heck of a voice rivaled only by Tom Baker himself.   His character is instantly likeable and his only failing is that he didn’t join the crew.  The Teriliptils, while not being great looking and clearly having difficulty walking, still convey enough of the “alien” to be genuinely disturbing looking.   In fact, the lead Terileptil is grossly scarred adding to the eeriness of it all.  (Although the effects by today’s standards just make one wonder if the mask was damaged in the making.  One can almost hear the dialog: “damn the mask was damaged… it doesn’t matter, we’ll say he’s the leader and he’s scarred…”  But it actually works surprisingly well!)

More than that, this again sees the Doctor using fire to destroy and take an active part in history.  I’m pretty certain we’ll find out the Doctor’s astrological sign is a fiery one!   Davros may have been more right than he knew when he called the Doctor “the destroyer of worlds.”  Our hero gave Nero the inspiration to burn Rome to the ground.  He’s responsible to the eruption of Vesuvius in Pompeii in 79AD and now he’s responsible for the Great Fire of London, 1666.   Sure, he didn’t mean any of it, victim of circumstances, the Doctor.  But had he never been in these places, none of this ever would have happened.   (I can almost hear the Woody Woodpecker line about going to the police…)  But the irony is that, had he not been there, the plague would have spread and Tegan would not have had a home to go back to, most likely.

There is something to be said about Davison’s era with regard to the location filming.  There are so many outdoor places that look like they genuinely pulled off a trip back in time that to not make a comment would be unfair.  The Visitation is just one example, but it’s a good one.  There may not have been loads of money for visual effects, so the locations add so much flavor and for these historical adventures, it’s a welcome feature!

And let’s end by addressing the elephant in the room: the death of a friend.  It was these miserable “territorial reptiles” that destroyed the sonic screwdriver.  It would never be seen again in the classic series.  In 1996, 7 years after the classic series went off the air, that strange American production (titled “The Movie”… good job creative team….) finally brought it back.  By today’s era, it’s an integral part of the series, to the point that getting a new Doctor means getting a new sonic!  But we have these low-brow escapees from the Tinclavic Mines that destroyed the original sonic screwdriver.  I can’t say I disagree with the decision as it was basically a “get out of jail free” card, but that could have been fixed with better writing.  Instead, we felt as the Doctor did; that he lost a friend.  I think that alone gives us justification for bringing the Terileptils back to our screens, with modern special effects to really make them scary!

(“Oh damn, the computer program developed a glitch and warped the graphics on this ones face … doesn’t matter, we’ll say he’s the leader and he was scarred…”)   ML

Read next in the Junkyard… Black Orchid

3 Responses to The Visitation