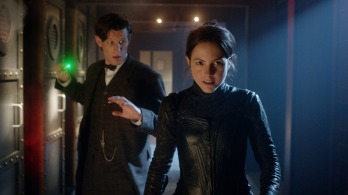 This might be the 100th episode of Doctor Who since it returned in 2005, but it feels more like a pilot episode for a Paternoster Gang spinoff, which bizarrely has never happened.  The Doctor doesn’t feature much in the first half of the episode, which plays with the normal structure of storytelling by starting mid-adventure and showing the usual starting point as a stunning sepia kinematoscopic flashback sequence.

The story takes inspiration from the Victorian tradition of the “penny dreadful”, cheap, disposable literature that was the first to popularise schlock fantasy that sometimes rose above its humble medium, such as Varney the Vampire.  More specifically, Sir Arthur Conan Doyle dropped a reference into The Golden Pince-Nez to a non-existent penny-dreadful-esque Sherlock Holmes Adventure:

When I look at the three massive manuscript volumes which contain our work for the year 1894 I confess that it is very difficult for me, out of such a wealth of material, to select the cases which are most interesting in themselves and at the same time most conducive to a display of those peculiar powers for which my friend was famous. As I turn over the pages I see my notes upon the repulsive story of the red leech…

So this is about showing us a penny dreadful plot, but legitimised through a popular medium, and at the time of this episode Doctor Who is a very strong equivalent to Holmes, even sharing a showrunner in its current incarnation.  A former strong equivalent to Doctor Who was The Avengers, which also shared a showrunner: Sydney Newman.  The presence of Dame Diana Rigg, leading the guest cast, provided an ideal opportunity to throw in some cheeky references to her previous life as Emma Peel, and it is actually quite melancholy to see her playing the evil old lady villain while somebody else gets to wear the leather and do the fight scene.  Rachel Stirling, Diana Rigg’s daughter, plays Ada.  Their other big collaboration is of course Detectorists, which I will cover in a Six Degrees article soon.  Ada’s story is a bleak one of shocking parental abuse, which darkens the tone of an otherwise comedic episode.  Doctor Who often veers wildly between those two extremes, and does so very effectively here.

The setting is a familiar one from British history, when a few successful employers set up whole communities, normally based around a factory.  Sweetville is most obviously a reference to Bourneville, set up by Cadbury (and used as the name of a bar of chocolate: mmm the dark choc one in Rose’s when I was a child!) but also Saltaire, established by Titus Salt who also had a daughter called Ada.  Doctor Who being Doctor Who, the philanthropy behind this kind of venture is subverted and questioned, and becomes evil empire building.

There are unfortunately a couple of scenes that make this episode one of the more controversial ones, and one of them would have been passable if it wasn’t for the existence of the other.  Firstly there is the Doctor’s unwelcome kiss that he inflicts on Jenny after he gets unfrozen.  This verges uncomfortably on assault, and is just about excusable in terms of the Doctor trying to get slapped because he wants to feel the sensation of pain.  He is pleased with the slap.  Having said that, if the slap was his intention he could have just asked to be slapped, and the older Doctor Who gets as a series the more the excuse that the Doctor doesn’t understand human interactions just doesn’t wash.  This is all quite debatable, until you get to the moment where the Doctor watches Jenny take off her Victorian clothes and turn into a leather-clad action girl, and his sonic screwdriver goes skywards, finally confirmed as the dodgy Freudian thing some fans have interpreted it as over the years.  This moment prevents the interpretation of the kiss as an innocent misunderstanding of an alien who doesn’t get what sexual assault is.  I’m not a big fan of the 80s approach to make the Doctor asexual, so I don’t particularly mind the sonic screwdriver moment in isolation, but in an episode that also includes that kiss it becomes somewhat uncomfortable to watch.  Apparently it was improvised by Matt Smith, and it is a very funny bit of physical comedy, but the whole point of having a director is for moments like this, to understand the script as a complete entity rather than a collection of scenes being shot out of sequence, and say “hilarious, but no.”

But it all happens in such a whirl that these concerns are buried reasonably deep within a hugely fun episode, with those big tonal shifts to keep us interested.  My favourite joke is the Thomas Thomas sat-nav stuff.  You can’t beat a good contemporary reference within a historical episode, which makes little sense in any terms other than that of the reference itself.  And this, in an episode that thinks a see-through veil will successfully disguise a Silurian in Victorian England.  Abandon all immersive viewing, all ye who enter here.   RP

Dame Diana Rigg as a villain in Doctor Who?  That’s got to be good.  Surrounded by so many strong episodes from Smith’s final season, and adding Jenny, Vastra and Strax to a Victorian era story with Diana Rigg as the villain… one can only expect good things.  But like over-selling a thing, expectations can come crashing down!  What went wrong?

Let me start by explaining the nature of Mr. Sweet and Sour.  This creature is a threat from the time of the Silurians.  Sweet!  Something that actually scared the monsters is not common in Doctor Who, beyond the Doctor himself.  So that should really add to the intensity of the monster-of-the-week.  But that means it is some 65 million year old relic that decides to build a rocket and spread its poison all over the world!  Let’s face it, the people of the Victorian era could barely conceive of rocket building yet this 65 million year old bug can?  Do I sound sour?  Well if I do, play me a happy tune on that organ that also hides a massive control panel for launching a rocket.  Wait, what?

On top of that, I’m a fan of Sherlock Holmes; I love the hint that this episode might have introduced us to that repulsive Red Leech.  (I’m still overjoyed that the giant rat of Sumatra might be the one from The Talons of Weng-Chiang, so I’m all for a bit of cross-referencing!)   But that name-drop is not enough to win me over.  If I were that easy, the Edgar Allen Poe reference would have swayed me even further.  I need more than that.  I can accept that there is often magic in Doctor Who.  I can accept that the science doesn’t always make sense and a bit of technobabble can cover all we need.   But this is like asking me to accept that mice are really running the planet and Earth is really a giant computer on the verge of a major breakthrough.  Oh… wait.  Slartibartfast, is that you?   And while Arthur Dent may have reluctantly accepted that, it was because of the brilliant comedy of Douglas Adams that helped us all turn a blind eye to the silliness of that event.  Mark Gatiss had given us The Unquiet Dead, an episode that I considered a masterpiece at the time.  What the Dickens was he thinking with this story?

And what’s with the red skin that keeps the Doctor’s mouth open wide and causes him to walk like a mannequin getting ideas of humanhood?    Was that supposed to look scary?  I’d say it was embarrassing more than scary especially seeing Smith in those outrageous leotards.

The Paternoster Gang is great fun to watch.  Jenny is looking progressively lovelier with each appearance.  Strax is still hilarious. Vastra is more and more the Who version of Sherlock Holmes. And Clara is becoming a bit pushy; this will just get worse next season.  But the threat never sells the story.  All the fun this episode offers and yet a hero is only as good as the villain and a leech doesn’t convince.  I’m sure Gatiss was going for a comedic story but Rigg is just too good to be trivialized.  And Diana Rigg is amazing in general.  Her work in Game of Thrones over the last few seasons just proves how incredible this 79 year old actress still is!  She’s a powerhouse!   Yet Gillyflower represents corporate greed more than she does a monster-possessed maniac!  And that takes away from Gatiss’ attempt at humor because you simply can’t minimize a master like Rigg.  The Unicorn and the Wasp was not held in check by the greatness of the actors so it comes out feeling fun and lighthearted while The Crimson Horror ends up falling on its red face because the actor is just too good to be silly.

Even the ending of the story goes off the tracks.  The Maitland kids have discovered photos of Clara in the past and threaten to reveal that she’s a time traveler.  Why would that carry any weight?  Hello Photoshop?  Hello old-fashioned picture studios?  I think dad Maitland would sooner believe Clara rather than his kids claiming she’s a time traveler.  But she gets blackmailed into giving them a trip in the TARDIS … and they are utterly bored with it, like they were asked to sit through a particularly dull Victorian Values class.

Going into this story expecting a lot is an unfortunate mistake.  Accept it as a silly romp and a chance to see Vastra, Jenny and Strax again and have a laugh with it.  Otherwise your mouth will be left hanging open in shock.  That could make anyone red-faced with anger!  ML

Read next in the Junkyard… Nightmare in Silver

1 Response to The Crimson Horror