Terror of the Vervoids 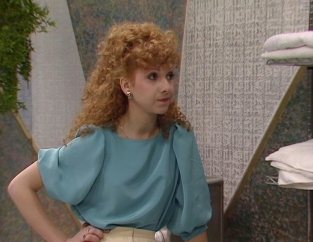 This is our future installment of the Trial evidence, and the Doctor is travelling with a new companion.  Mel’s main function at the outset seems to be to get the Doctor to exercise, rather bizarrely and cruelly calling attention to his weight gain: “it’s your waistline I’m concerned about.”  The intention seems to be to show this as a more chummy Doctor/companion relationship with a bit of friendly banter.  With the introduction of Mel the show is finally starting to evolve away from the worst tendencies of the Sixth Doctor’s era.  She wears more clothes for a start.  She is also not defined by being a victim and nothing else, possessing computer skills, intelligence and independence, plus a desire to go exploring and solve mysteries herself.  Yes, she’s a screamer, but there is a clear evolution of the companion role from Peri to Mel to Ace, and we are on the right track.  The casting of Bonnie Langford was unpopular with fans at the time, who felt that it was stunt casting, the kind of wonky thinking that led to similar objections when Billie Piper and Catherine Tate were cast in companion roles.  Mel may not be in the same league as Rose or Donna, but when you consider the material Langford had to work with she actually did a great job of bringing some real charm and quirkiness to a series that had been completely lacking any for the preceding eight episodes.

It’s just a shame Mel is forever remembered for her ability to scream in the same key as the theme music.  Having said that, it’s a fabulous cliffhanger and she really sells the moment, making a refreshing change from John Nathan-Turner’s bizarre insistence on ending virtually every episode on a closeup of the Doctor’s face.  Never was a producer so in love with the reaction shot as a storytelling medium.

At its heart this is obviously a whodunnit, and in the best Agatha Christie traditions nearly everyone has a motive and is guilty of something, but not necessarily the crime being investigated.  There is a maze of ulterior motives behind people’s actions, ranging from wanting to hijack the ship, to wanting to make money out of the Vervoids, to being a secret detective, to roping in the Doctor to help without simply asking him.  It would all work rather well if matters weren’t still being confused by the question of whether what we are watching is reliable evidence or not, but it’s still a whole lot of fun to try to figure out what’s going on.

This is all a very refreshing change from the bleak tone of the last few episodes.  Pip and Jane Baker always tailored their scripts towards a family audience far more than most writers from the same era.  They were skillful in building the story to a point where it can raise the stakes for the final section of the Trial (although we will get to the clumsiness surrounding all that on Friday), with the manner of the Vervoids’ defeat: all very competent and it works efficiently.  As writers they were safe pairs of hands.  However, they could be unambitious and this is a good example.

The Doctor’s act of genocide is a reasonable solution to the problem he faces… for anyone who isn’t the Doctor.  He quite fairly makes the point that when the choice was the destruction of the Vervoids or allowing them to wipe out all life on Earth, he did the best thing.  But it shows a strange naivety to choose evidence for his trial in which he wipes out an entire species, on the grounds that he saved Earth, without the thought occurring to him that there is anything wrong with genocide until it gets pointed out.  This is entirely inconsistent with several key moments in the show’s past.  In fact it is inconsistent with the character of the Doctor, full stop.  How much better would it have been if he had found a third way: a solution that saved both races, something nobody else would have thought to do.  There would have then been a strong coherence to his choice of this particular future evidence, as that really is a good definition of the Doctor.  He is a man who is often faced with two horrible choices, and chooses the third one.  But not today.   RP

The Doctor gets a chance to defend himself in Terror of the Vervoids.  This is the third story of the Trial of a Time Lord season-arc and we are thrown into a murder mystery worthy of Agatha Christie.  And a heck of a mystery it is too!

Let’s start with the annoying things first.  Two words: Mel Bush.  No, it’s not that she’s actually bad, she’s just sort of a doped up cheerleader.  Bubbly to the point of annoying and worse, she’s introduced as a future companion.  We don’t ever get to meet her and go through the whole “bigger on the inside thing” with her!  At the point she joins up with the Doctor, she’s known him for some time, but at the end of the trial, she goes off with the Doctor, so was her first encounter with him always on the trial ship?  Then there’s Commodore Travers, who the Doctor seems to have met before, but with all of his episodes, we’ve never seen him, so it’s all new to the viewers.  (I’d argue that he should have been played by Leslie Nielson, and we could have tied it this character right in to The Forbidden Planet, but no one thought of that.)  There’s also Professor Lasky, a sharp-tongued annoying scientist who is just about as snarky as you can get without being thrown out of an airlock.

Then there’s the flip side.  The mystery is really quite good.  And unlike so many mysteries on television, there is a clue left in plain sight for the viewer to figure things out.  You don’t have to be a genius, but you do have to pay attention.  Unfortunately, when it is revealed, if you missed it, you smack yourself like you wanted a V-8 but there’s one little fact that you, oh viewer, can take solace in: Doctor Who often bungled things due to budgetary constraints, so if you did see it and thought nothing of it, it could be that you thought it was an oversight!  Don’t beat yourself up!  The Vervoids themselves are actually a terrifying race.  I love a good plant race that wants to eat humans or make compost heaps out of us.  As one human is slowly transformed into a Vervoid, the effect is deeply disturbing, enhanced by the beating vein on the young woman’s face.  But as far as their looks go… there’s something about their faces that is slightly uncomfortable to look at.  (Remember, I don’t like the Doctor commenting on alien’s looks, but I’m not the Doctor and I can say… there’s something off-putting about this creature!  Go on, tell me I’m wrong!)

I won’t spoil the big mystery here, even if the episode is 30 years old.  (I cried as I typed that.)  It’s still the first solid piece of the trial and hold up fairly well.

The biggest thing to come out of the episode is proof that neither the Doctor nor the Valeyard know how to use evidence to make a case.  The Valeyard shows enough evidence of wrongdoing that he should have been thrown out of court for being a dolt.  But the Doctor finds evidence that shows him committing genocide.  He couldn’t have found better evidence?  (Like maybe the events of The Day of the Doctor?)

I’ll say one major negative about the story though, and it’s a major screw up.  By allowing this idea that future events could be viewed in the Matrix, there’s no reason to ever question the Doctor’s judgment again.  And by allowing that into the history of the show, it takes away from things like the Time War because it implies they could see it coming.  Furthermore, the seer, who warns Rassilon “burning, burning, so burning…” is an over-paid fraud.  All they’d have to do is go into the Matrix, view a future event, and realize the Doctor would save Gallifrey.  Why go through the motions?

Maybe the Time War erases it all.  Maybe it works like rewriting the script.  Let’s hope so.  Otherwise, we may find out that a lot of the history of the show was made up to appease a bad writer…   ML

Read next in the Junkyard… The Ultimate Foe

Co-writer on junkyard.blog. Author of windowsintohistory.wordpress.com. Editor of frontiersmenhistorian.info
View all posts by Roger Pocock →
This entry was posted in Doctor Who, Entertainment, Reviews, Science Fiction, Sixth Doctor, Television and tagged Bonnie Langford, Colin Baker, Mel, Terror of the Vervoids, The Trial of a Time Lord. Bookmark the permalink.

1 Response to Terror of the Vervoids