The Power of the Daleks 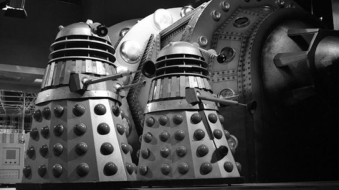 Apart from a handful of clips, The Power of the Daleks is a completely missing story.  Such is its importance that there have been more different representations of the story than another other, which makes it difficult to look through the mist of the various interpretations and form any opinions that are not skewed by a particular version.  There are other stories that exist in several different forms, most notably The Daleks, which was remade as a movie and also had a novelisation (the first ever) which was highly individual from what appeared on screen, but the original is there for us to see.

My first experience of The Power of the Daleks (in 1993) was a cassette tape release of the audio, recorded at time of broadcast by a fan.  Of course, when you listen to just the audio of a Doctor Who story there are things going on that are entirely visual, which need explaining by a commentary track, and the first one was read by Tom Baker, in character as the Doctor as if he was remembering an adventure.  When the missing episode audios were released on CD the narration was redone in line with the house style of the others, with Anneke Wills narrating.  Predating the 1993 cassette release by a month was the novelisation, one of the last of the original run, and later the same year the DWB Compendium was published, including the telesnaps, which was my first look at those.  Unique amongst missing stories, we also had an MP3-CD release of an official reconstruction, using the audio and the telesnaps and for those “in the loop” there were the fan-made recons as well.  Finally we got the animated version, and then the colour animation.  So our experience of getting to know The Power of the Daleks has been frustratingly piecemeal over the course of over 20 years, with fans who were not “connected” having no way to experience it at all pre-’93.

Throughout all this the consensus opinion has always been that it is utterly brilliant, and it’s hard to argue with that.  Troughton’s approach to the “renewal” is to set himself apart from Hartnell with his own interpretation of the Doctor, while remaining true to the character, and that’s a very fine line to tread.  A lesser actor would have made the viewers dislike the new Doctor with the slight edginess and refusal to confirm his identity, and that could have killed off the series there and then.  But a very clever thing happens to help him out, and it’s at the expense of another character, because Ben is the sacrificial lamb here.  He is the voice of the audience in his scepticism, but he comes across as a right idiot, with Polly as the voice of reason.  So Ben and Polly are positioned as the two conflicting voices in the mind of the viewer: the one that wants to accept the new Doctor and the one that isn’t sure.  And the latter is made to look stupid.  It’s a moment of genius that leaves the viewer with nowhere to go other than to accept what has happened because we can’t possibly sympathise with the fool who can’t bring himself to believe the evidence of his own eyes.  Troughton being magnificent helps that process along, especially as he is headlong into a new adventure without too much delay.  Before we know it we are fully accepting him, and that is finally and completely cemented in place when a Dalek shows up and recognises him.

A lazier and in many ways much more obvious approach to establishing the new Doctor would have been to retread old ground with the Daleks, dropping the Doctor into a familiar Dalek plot, but this is something very new.  The Daleks have shown cunning before, but never quite like this.  The title is an apt play on words, because we see just how powerful one or two Daleks can be, playing humans for fools while they build an army, identifying and utilising human failings.  Only Doctor Who could make the words ‘I am your servant’ frightening, and at times it genuinely sounds like the Dalek is wrestling with its inner desire to shout out words of hatred and is really struggling to bring itself to maintain the charade of obedience.  This is meaty stuff, with the Daleks calling out the humans on their morality:

It’s an interesting theme, because the human race here is represented as a devious, self-serving mess, in a chilling parallel with the Daleks themselves.  Lesterson is our ray of hope who tries to fight against what is happening and, in an astonishingly powerful performance from Robert James, he is sent mad.

So we are moving forward, changing, evolving.  The Doctor has been renewed, and so have the Daleks, who are now unrecognisable from the cardboard cutout villains of The Chase, for example, while ironically actually employing some real cardboard cutouts to bulk up their numbers.  You can’t fault the ambition.   RP

The Power of the Daleks is an ironic title considering there is only ever a couple Daleks on screen.  But the title is even more ironic, because while the natives of Skaro may never prove to be particularly powerful in this story, the way they are in, say, Dalek, where one can take out the whole of America, they do exhibit a power totally unexpected.  It was the power to launch a series into legendary status.  See, a lot of shows have to write characters out and others in; Doctor Who was not unique in that, but it was virtually unheard of to write the title character out.  And to this day, I can’t say I know of any show that writes the title character out while still keeping him in.  That is the true power of the Daleks… they were the first enemy of Patrick Troughton’s Doctor.  It gave us a chance to see Troughton in action and it would give us an idea of just how great a gap there was between our first Doctor and our second.  Thankfully, in Troughton’s mischievous hands, the Doctor would go on for a very long time indeed!

The joke is, story-wise, there’s a lot of retread ground.  Another base under siege story, which becomes increasingly popular during Troughton’s run, another case of mistaken identities, which also becomes increasingly popular throughout the shows history and of course, Daleks, which … you get the idea.  But let’s not forget, these become more popular with this story.  While they existed before, it wasn’t until Power that we started seeing the pattern repeat more and more.  Like Victory of the Daleks 50-ish years later, we see the Daleks being courteous to get their way.  I don’t know that having creatures with plungers for hands would make good servants, unless the toilet gets clogged, but I never had a servant so maybe I wouldn’t complain.  Would you like some tea with that?  Oh my giddy aunt!   But it’s important to remember that until this time, we had never seen a full Dalek outside its casing.  This story is the first to have that overused title format, X of the Daleks.  (Evil of the, power of the, destiny of the, remembrance of the, resurrection of the, overly complicated evil plan of the, etc of the Daleks.)  But most importantly, it’s the first for introducing a new lead into the show.  Based on Troughton’s performance, the show could either launch into a new season or flop like a Dalek cast out of its shell…  And it makes a spectacular launch!  Without this story, Doctor Who may not be the 55-year-old show it is today.

And that’s the beauty of it.  It doesn’t matter that three Daleks loop through a doorway to give the impression of a large number; it does nothing to take away from the sheer beauty of this story, being a first for the most important part of Doctor Who.  The sequence in the TARDIS of the Doctor looking in the mirror only to see his former self is a work of breathtaking beauty.  The idea of regeneration, even if the confused Doctor thinks it has something to do with the TARDIS, opens the door for every magnificent incarnation of the Doctor that followed.  The confusion and the reaction of the companions is a staple of the series now but it started here, with the Doctor, Ben and Polly.  As for the idea of the TARDIS being responsible for the regeneration, it’s not entirely unprecedented.  The Doctor does seem to need the TARDIS for a stable regeneration.  Pertwee’s Doctor needs a lot of rest after his change and he wants to get back to the TARDIS rather desperately and Davison’s actually indicates the Zero Room will help him heal, but to say it was responsible… that’s questionable.  It’s not until Tennant that a 15-hour rule is established but it can all be traced back to this point.  His confusion can be very easily overlooked because it was his first regeneration and they always cause some confusion for the poor chap!

I recently obtained the animated version on DVD and have yet to sit and watch it with my son, but hope to do that soon.  From what I saw, the biggest challenge will be whether to watch in black and white or in color.  But one thing is for certain: seeing this story reconstructed for the first time will be inspirational.  It’s an absolute cornerstone of Doctor Who.  It’s a tragedy that the original no longer exists, but a testament to those who love the show that they animated it!  May they continue to do that for all of the lost episodes and truly give us a glimpse into that glorious past…   ML

Read next in the Junkyard… The Highlanders

Author of windowsintohistory.wordpress.com Co-writer on junkyard.blog Editor of frontiersmenhistorian.info
View all posts by Roger Pocock →
This entry was posted in Doctor Who, Entertainment, Science Fiction, Second Doctor, Television and tagged Ben, Patrick Troughton, Polly, The Power of the Daleks. Bookmark the permalink.

1 Response to The Power of the Daleks