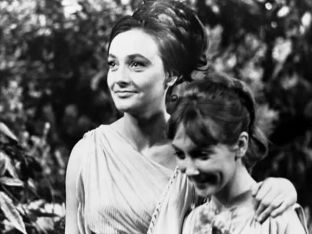 In the first episode of Doctor Who spinoff series Class, For Tonight We Might Die, this happens:

APRIL: I think I’m going to ask Charlie to the prom.
TANYA: And you just made us fail the Bechdel test.

So what is Tanya talking about here?  In 1985 an American cartoonist called Alison Bechdel wrote a comic strip in which two female characters from the future discuss their requirements for going to a movie.  These requirements became known as the Bechdel test, and are as follows:

So the quote from Class is an audacious piece of fourth wall breaking as Tanya is tacitly acknowledging her status as a character in a television programme, but then Class was always underrated and very clever.  It pops up in the episode as a little throwaway remark and that’s it, challenging the audience in a way that says, “you don’t know that that means?  Well you should – go find out.”

All of this raises the obvious question: how does Doctor Who do in terms of interaction between female characters?  For a series that now spans over 50 years, the answer is actually surprisingly well.  It is obviously helped by the preponderance of female companions, so there is only a necessity for one female character within a story, and some interaction between her and the companion, in order for a story to pass.  And of course the eras of the show with multiple companions pass the Bechdel test almost by default, so the first couple of years of the show with (tellingly) Verity Lambert in charge have an near-100% pass rate, due to the lineup of Susan and Barbara, or Vicki and Barbara.  But the minute Lambert departs we are down to one female companion, and the rate of female guest characters is pretty poor, as we would expect from the 1960s.  The late Hartnell era does badly, with some male-centric stories such as The Smugglers.

Interestingly, the Troughton era hits a similar success rate to the Hartnell era, despite never having more than one female companion at a time, but the series seemed to be aiming for a good number of strong female guest characters, such as Kaftan, Astrid, Anne Travers, Maggie Harris, and then both Gemma and Tanya in The Wheel in Space.

The Third and Fourth Doctor eras fare a lot less well, especially the Fourth, where strong female guest roles became something of a rarity.  The Hinchcliffe era may be fabulous in many ways, but how many female characters are there in Season 13, for example, who get a decent chunk on the action in any story?  The series goes by with barely a female face on screen, until Amelia Ducat turns up to save the day.

Things improve for the Fifth Doctor, but mainly as a result of having two female companions for part of the run, and then we are back down to a pass rate hovering around two-thirds (as we were for Docs 3 and 4) for the Sixth Doctor, travelling throughout his time with just one female companion.  So to recap, we are broadly speaking at this point around the three quarters success rate mark for Doctors 1, 2 and 5, and around two thirds for Doctors 3, 4 and 6.  It’s hard to be precise, because there are degrees of interpretation here.  And then something amazing happens: McCoy hits 100%.  The Seventh Doctor era was in some ways a template for Doctor Who’s eventual return, and this is a good example of just how far ahead of the game it was.  In fact, we never did get back to that perfect score in the Bechdel test, with subsequent Doctors hovering back around the three-quarters mark.  The David Tennant episodes score highly, until we get to the specials where he is travelling companionless.  The early Steven Moffat era saw something of a nosedive in the stats, partially due to Amy’s lack of family connections, and then things picked up strongly towards the end of the Capaldi era.

What is interesting about all this is the degree to which passing the Bechdel test has been dependent on the presence of one or more female companions.  With a female Doctor and companion this year we can obviously expect a 100% pass rate, but it is noticeable that this hasn’t happened since the 1980s, and really there’s no excuse.  Flip it around and look for stories that fail the reverse Bechdel Test.  How many Doctor Who stories do not feature two male characters talking to each other?  Anything spring to mind?  No, me neither.  With a female Doctor on the horizon the pendulum is about to swing.  The statistics make it hard to argue that it isn’t the right time for this to happen.   RP

Co-writer on junkyard.blog. Author of windowsintohistory.wordpress.com. Editor of frontiersmenhistorian.info
View all posts by Roger Pocock →
This entry was posted in Doctor Who, Entertainment, Random Chatter, Science Fiction, Television and tagged Bechdel Test. Bookmark the permalink.

2 Responses to The Bechdel Test