The Androids of Tara 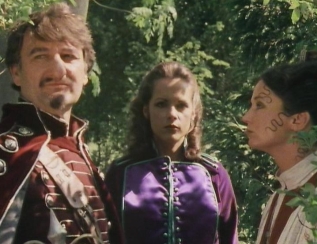 The first thing that always gets said about The Androids of Tara is that it was based on The Prisoner of Zenda, by Anthony Hope.  I suspect that might feel like an obscure reference nowadays for any new fans discovering the classic series for the first time, but I think it is fair to say that it is a plot that would have been recognisable to most viewers at the time.  I read the book when I was a teenager and I can recommend it.  The hero is Rudolf Rassendyll, an English distant cousin of the heir to the throne of Ruritania, whom he resembles.  The Androids of Tara follows the story closely, with the drugging and kidnapping of the king, the stand-in double for the coronation, and the rescue of the king from the castle, but throws in some androids.  This is Doctor Who, after all.

Ruritania was of course a fictional place, inspiring other made-up lands such as Freedonia in Duck Soup, cheekily referenced in The Shakespeare Code as the homeland of Martha.  It was not the first fictional land, but made such an impact that it inspired a whole genre of fiction known as Ruritanian Romances, and probably played a part in the growth in popularity of the fantasy genre, which of course nearly always takes place in a make-believe land.  Fantasy is a big part of Doctor Who, so The Prisoner of Zenda is a more obvious target of inspiration than it might seem nowadays.  It has somewhat faded from public awareness, but the ripples that spread out from it are still being felt.

Writer David Fisher seems to have recognised the link between Zenda and fantasy, although the book itself it not fantasy beyond having a fictional setting.  The reason I say that is he attempted to merge Zenda with the wider world of fantasy.  His original intention was to have Tara populated by unicorns, dwarves, etc, but sadly all we get is the wood beast, what with the budget unable to stretch beyond hiring a monkey costume.  Echoes of the original intention remain in the names of two of the characters, with Grendel (the antagonist of Beowolf) and Lamia (a monster from Greek mythology).

Beyond that The Androids of Tara is fairly straightforward stuff, pitting the Doctor against an absurd villain and playing it for laughs most of the time.  Peter Jeffrey plays Grendel with a dangerous charm that we have not really seen since Roger Delgado’s Master, and Fisher gives him some great lines to sink his teeth into.

…and of course his magnificent final line, “next time I shall not be so lenient”, probably the funniest parting shot from a Doctor Who villain ever.  He was too much fun to kill off, but sadly we never got a sequel.  All the android double shenanigans are enjoyable as well, particularly seeing Mary Tamm play four different roles (sort of), but I am never keen on the well-worn plot of having two people just happen to look identical.  In the original novel the resemblance is due to a family connection, but here it is just a coincidence.

The search for the segments of the Key to Time is integrated into the story in a completely different way here to the previous three.  It is a shame that the fourth segment’s identity is something of no great significance, but its confiscation by Grendel is a useful way to draw Romana and the Doctor into the story.  And if it seems like the segments should be more significant items than a statue that is of no relevance to the rest of the story, we are about to get our wish…   RP

One thing that must be lots of fun for an actor is having a range; to go the distance from hero to villain.  I’ve seen many interviews where an actor will talk about how much fun it is to play a different character to the one they are used to playing.  Mary Tamm plays Romana and Romana’s double so she gets two roles.  Except in The Androids of Tara, there needs to be androids and that means a duplicate for both versions.  So Mary Tamm gets 4 roles in this story, and it’s only 4 episodes long!  And, true to form, Doctor Who once again merges our hero with another classic; this time The Prisoner of Zenda.  I have to confess: I know next to nothing about that prisoner, and can’t speak about it in any way to do it justice. On the plus side, there’s a good chance that many viewers will miss the significance as well.  So the question that has to be asked is: how does this story hold up in relation to everything else in Doctor Who and the Key to Time segment specifically?

Further proof of something I brought up during our discussion of The Ribos Operation is that this magic device, the Key to Time, should be on the minds of many a villain.  Forget the Pandorica or the broadcast from Trenzalore, this artifact has true power and I would expect that every villain throughout time would be lining up to find this device. It is evidently so easy to find, Romana locates it in the first few minutes of episode 1.  Yes, ladies and gentlemen, this super-powerful universal pause button is so dangerous that it can be hidden in plain sight and can be easily detected with an advanced divining rod.  Why the Doctor is needed to track it down is anyone’s guess.  It’s actually hard to get one’s head around it.  Sadly, Romana hasn’t had any experience with vandalism and doesn’t expect people to be upset about her desecrating a statue that ends up being the next segment. You’ll have to forgive me but I have to do this: someone, some-when, carved that statue.  Does the Key remain unaffected by that?   Was the segment always that crystalline form surrounded by marble?  I mean, these are important things to understand!  Imagine what happens when we get to Princess Astra!  But like the segments, this element gets ignored so quickly that it can be easily forgotten.  It utterly and completely falls into the background and is not even a topic of discussion again.  Once again, this marvelous object is a means by which we get a story about the Doctor visiting yet another random place exactly as he always has, since the beginning of the series!

Barring that, the episode is standard game of mistaken identities like we get in Black Orchid a few seasons later.  The difference there is that we ended up with a nice period piece at half the length.  Sarah Sutton doesn’t have to play 4 roles to make it as confusing as possible and that story feels tightly told, even if it’s not a fan favorite.  Contrasted with Androids, Count Grendel is a typical baddie like we’ve seen so many times before.  He is part of a society not unlike what we’ll see again, also done to better effect, in State of Decay.  It’s a society with a nearly medieval class working alongside a much more powerful class that owns androids and has the Walmart brand of light sabers.  Credit where due, Androids may have succeeded in a few ways: State truly looks like it’s been filmed in a feudal land, while Androids has some truly spectacular views so it is visually beautiful.  And in that same vein, Romana looks genuinely stunning in this story and with the range Tamm gets, she really carries the bulk of it, but the story is too mundane for such an epic quest!  The whole of the Key to Time saga has really been about going from place to place and leaving with a souvenir; the one thing the Doctor has never bothered doing in the past.  Well… rarely.

Ultimately the problem with The Androids of Tara is that it suffers too much of the infamous “been there, done that” style of storytelling in Doctor Who.  It’s another genre clash but the biggest mistake is that it happens during a quest that should have been huge, nay, epic.  If this one came out during a regular run, it might have fared better.  Unfortunately it comes off like a cheap android copy of other, better episodes.   ML

Read next in the Junkyard… The Power of Kroll

Author of windowsintohistory.wordpress.com Co-writer on junkyard.blog Editor of frontiersmenhistorian.info
View all posts by Roger Pocock →
This entry was posted in Doctor Who, Entertainment, Fourth Doctor, History, Reviews, Science Fiction, Television and tagged K9, Romana, The Androids of Tara, The Key to Time, The Prisoner of Zenda, Tom Baker. Bookmark the permalink.

5 Responses to The Androids of Tara