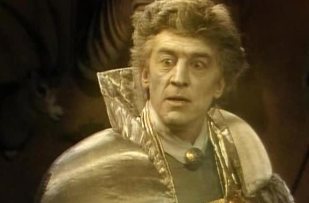 Yesterday we looked at the Sylvester McCoy story Ghost Light and in particular the degree of complexity on display, so let’s take a look today at the story itself, and some of the themes it tackles.  We are obviously going to have to talk about evolution, so we’ll start with that.

In Principles of Biology (1864), Herbert Spencer used the phrase “survival of the fittest”, which was later adopted by Charles Darwin in The Variation of Animals and Plants under Domestication (1868).  The term is widely misunderstood and largely nonsensical and irrelevant anyway.  Spencer used the term simply as a rephrasing of Darwin’s own term “natural selection”, and then Darwin accepted the phrase and expanded upon it.  Both men were making the point that animals that are best adapted to their environments will reproduce more and leave more copies of themselves to carry on their bloodline.

So firstly we need to understand that the idea is largely tautological because it is basically saying that animals best adapted to survive are the ones that survive, so it is one of history’s great examples of stating the blindingly obvious and everyone thinking they are absorbing and understanding some kind of deep truth.  More importantly, Darwin and Spencer were pioneers of evolutionary theory.  They clearly weren’t going to get everything right and they were pretty much wrong here.  Evolution is not governed by the ability to survive within an environment, but rather the ability to find an empty space and adapt to it.  Largely, that’s about luck.  Finally, we get to our big misunderstanding: the term “survival of the fittest” has nothing to do with “fitness” in the way that most people understand the term.

Principally, Ghost Light plays with the Victorian era backlash to the idea of evolution.  Reverend Matthews is the anti-evolutionary voice here, and he is shown to be a fool.  Light literally makes a monkey of him, mimicking a kind of reverse evolution without actually employing the impossible concept of de-evolution of an individual.  The choice of a monkey is simply to mock the Reverend.  Whereas Matthews doesn’t believe in evolution, Josiah misunderstands it and thinks he can use the survival of the fittest to gain power.  Ultimately he is every bit as much of a fool as the Reverend, if not more so as he is an imperialist monster:

JOSIAH: The British Empire’s an anarchic mess. There’s no clear directive from the throne, mo discipline. Result? Confusion, wastage. I can provide a new order. Wealth, prosperity.
DOCTOR: Confusion, wastage, tyranny, burnt toast, till all the atlas is pink.

So this might seem like a story of science vs religion, but more accurately it is the contrast between two misunderstandings: the misunderstanding of science vs the misunderstanding of religion.  The story does not actually wholeheartedly embrace scientific rationalism and reject the non-scientific.  Doctor Who exists too much in the realm of fantasy for that to ever work, and it would certainly impose very boring restraints on the series.  So thematically we have the supernatural aplenty here.  Josiah is a vampiric character, with an aversion to sunlight that he has to overcome.  Mrs Grose is a direct reference to The Turn of the Screw, which is of course a fabulous ghost story by Henry James (1898), at the tail end of the Victorian ghost fiction tradition.  And in many ways this is a haunted house story.  Note that Ace went to the house in the future and felt the echo of evil, a specifically supernatural idea, as is the concept of something coming to life when the clock strikes (slightly subverted because this would normally be at midnight).  Then we have the manner of the Doctor’s defeat of Light, in which he invokes mythical and fictional beings:

DOCTOR: You missed the dragons, the bandersnatches. Then there are the slithy toves and the crowned Saxe-Coburg.
LIGHT: Where are these items?
DOCTOR: I can’t think how you missed them. You have to complete the catalogue before you can destroy all life here.

Light is an angel who is trying to understand science, and doesn’t get it.  For a super being he comes across as especially foolish, failing to grasp how evolution works or embrace change, and trying to catalogue the un-catalogue-able.  The Doctor invokes the world of fiction (in particular “banderstatches” from Through the Looking Glass), which stands astride the science/superstition divide and he therefore conquers both sides.  He is from the world of stories, and he knows the right words to use.  If Doctor Who has to sit on one side of the divide between rationalism and magic, the Doctor’s use of mythology and fiction to defeat the rabid proselytism of skewed Darwinism makes it clear which side.   RP

Read next in the Junkyard… The Curse of Fenric

1 Response to Themes in Ghost Light