The Ambassadors of Death 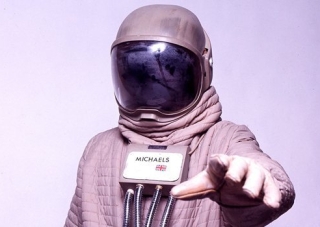 The Ambassadors….. OF DEATH!!!  Despite being seven episodes long (and unlike The Silurians never quite justifying its length) this feels incredibly modern.  It is one of only a handful of Classic Series stories to get a proper trailer, it has pre-credits sequences (well, mid-credits really), and the aliens are kept hidden away in spacesuits.  The sight of a space suit is made frightening simply with clever direction, something Steven Moffat latched onto for Silence in the Library and The Impossible Astronaut.  The sequence where the ambassadors attack, framed by sunlight, is possibly the cleverest piece of direction in the whole of the Classic run, making the mundane frightening.  It is art creating fear.

At the end of The Silurians the Brigadier committed an act of genocide, to the Doctor’s disgust.  There was really no way back from this that could possibly make sense of the Doctor continuing to work with UNIT, so it might have been the best policy just to ignore it (better still, not to have included that moment at all), but instead we get a sticking plaster over a wound with a bit of mild sarcasm from the Doctor:

Oh well, I suppose he’s got to do something to occupy his mind now that he’s blown up the Silurians.

And that’s it.  But we are now moving into an era where the Doctor’s characterisation is completely unlike anything we have seen since the early Hartnell stories, if at all.  The Third Doctor is a difficult one to warm to, certainly at this early stage before Jo shows up to soften him (as Vicki did with the First Doctor).  He is grumpy, arrogant and patronising:

The man’s a fool! How can I possibly tell who the message is from until I know what it says? Let me explain this to you in very simple terms.

It’s not done with so much as a hint of charm either.  Back in The Tomb of the Cybermen, the Second Doctor was asked by the self-important Viner how he had worked something out.  His answer: “by keeping my eyes open and my mouth shut”.  If you want to see how the Third Doctor’s characterisation is going astray, compare that with this moment:

CORNISH: How did you know that sound was going to be repeated?
DOCTOR: By exercising my intelligence.

But this is very early days in terms of the Third Doctor’s era, and everyone is still figuring out what to do with him and how to make him fit into the Earthbound stories.  Left to run with the decision to exile the Doctor to Earth, Barry Letts and Terrance Dicks had to work out exactly how to do that, and for the first year at least there is a sense of searching around to find inspiration from other successful shows.  Is this new kind of Doctor Who going to be James Bond, or The Saint, or The Avengers, or Quatermass?  There’s certainly more than a hint of Quatermass about this, with the astronauts returning to Earth having been substituted.  But for me the obvious source of inspiration here is from a different medium altogether, one of the greatest sci-fi successes on radio and the last time radio in the UK ever achieved a bigger evening audience than television: Journey into Space.  Obviously I listened to it long after the event (I’m not that old!) and was lucky enough to hear it as a child.  It made a strong impression.  The pacing is predictably slow, but it builds up an atmosphere of fear, based largely on the unseen, and really plays on outer space as being a dangerous place to be.  Now robbed of the safety of the TARDIS, the Doctor has to find other ways to get off the planet, adding an element of danger, fear and isolation not seen since The Seeds of Death.

…which brings us back to Terrance Dicks, who reworked the scripts for The Seeds of Death and does the same here.  He is the creative talent behind so many more Doctor Who stories than you might realise by looking at the credits, a genius at taking a script that isn’t quite working and shaping it into something that works.  Here he had help from Malcolm Hulke, helping to create a reasonably coherent vision for the series that starts with The Silurians and ends with Inferno, written by an old friend of Dicks, Don Houghton.  The coherence is there, despite a run of very different kinds of stories, and this one basically written by committee.  The original scripts for The Ambassadors of Death were written by David Whitaker for the Second Doctor and set in the future.  It was reworked several times but Whitaker was struggling to make it fit within the new premise of the series, so Malcolm Hulke and Terrance Dicks worked out the final scripts between them.

What they ended up with was a fascinating story of mankind’s bodged first contact with aliens due to a man obsessed with revenge, having misunderstood their motives following a tragic accident.  Nobody is evil for the sake of it.  Everyone thinks they are doing the right thing.  The ambassadors want peaceful contact.  Carrington wants to stir up trouble so he can see his friend’s killers wiped out.  And this time, in stark contrast with The Silurians, the Doctor finds a way through the mess to a happy ending by working together with the aliens and UNIT.  So we end up with two consecutive stories that work very well in opposition to each other: one where the Doctor loses and the end result is genocide, and another where he wins and actually manages to broker peace.  This theme will continue, with the Doctor next time both losing and winning within a single story…  RP

Didn’t the first Doctor say that the power under the TARDIS console was so powerful that it could obliterate…. everything?  Then how did the third Doctor get the console out of the TARDIS without harm?  Do they sell a plug on Gallifrey that could be used for such eventualities?  What does that manual look like?   “Just raise your console one inch off the ground.  Make sure to have 2 or more people helping you as your console is heavier than it looks.  With your foot, slide the plug over the gaping maw of doom.   Be careful not to miss the chasm as it will obliterate the universe.  Omega Productions will not be held liable for improper use of the Doom Plug. ”  Moreover, how did he get the console out of the TARDIS?  The doors are hardly wide enough!  All these questions and I haven’t even started talking about the main thrust of The Ambassadors of Death.

Perhaps that’s because The Ambassadors of Death should have been a 4 part story to tighten the pace.  Otherwise it works as a lot of back and forth storytelling that isn’t particularly exciting.  Yes, this is one of those 7 part stories that go on far too long.  It’s actually a very intelligent story though, and one of the most believable tales that come out of Doctor Who, probably because the pace is slower.  The downside is that the end result is that by episode 7, you feel like you’ve run a marathon.  Sitting for this one in movie-format, it clocks in at nearly 3 hours and is nowhere near as exciting as either of the first two Lord of the Rings movies, which both come in around the same length.  And I should be grateful that my mom gave me a Vinyl Doctor Who set when I was a kid rather than record this because I think for a young viewer, this one would have been too slow and plodding to appreciate fully.  It wasn’t until I was old enough to appreciate the slower pacing and get the most out of this story that I could really speak highly about it and that missed first one, I think I would have had a hard time getting through.

But even as an adult, there are some things that I don’t like.  One of the issues I take with classic Who is how often it suffered a bit of “Batman Syndrome”.  I remember watching Batman and noticing that every episode a new tool would be introduced and coincidentally it would save the day later in that very episode (then vanish without a trace after that!)  In The Ambassadors of Death, the Doctor sends Liz into the future for a few seconds.  When he is being searched for a much-sought-after tape, he makes it vanish only to get it back moments later.  It’s a great idea but the physics of the universe should be understood to begin with, otherwise it’s tantamount to magic. Plus one would wonder if he understands how to do this, why does he ever get caught with anything again.  For instance, when a certain Terileptil tells you to drop the sonic device, why not make it vanish for a few seconds?  Because it was magic for one episode and gone from then on.  Pass me the Bat Shark-Repellent Spray, please!   Another misstep is at the end of episode 4, the Doctor clearly doesn’t understand murder: he walks into a room seeing a dead body, but fails to peruse the surroundings first.  My kids and I think it’s a British thing: British eyes are like lasers that focus on one thing only but miss the periphery.  How often does the Doctor walk into a room and see something then announce “oh, hello, what’s this?” only to walk a foot and find a corpse?  I take in the whole room, so I may lack laser focus, but I’m not about to be jumped by a space astronaut either!  Look, his regeneration may have left him in need of glasses, or he just doesn’t think it through, I’m not sure I like the options!

Complaints aside, episode 2 has a very effective cliffhanger. Having retrieved the shuttle, Huey Lewis… I mean Ralph Cornish… is communicating with the astronauts but when the astronauts repeatedly request permission for reentry, the Doctor announces to cut the capsule open.  The tension is incredible.  To be left waiting for a week to find out what was inside would have driven anyone a little mad.  But the effect is very adult story telling.  We didn’t need a monster to scare us for a week; we’re given the ambiguity of not knowing and that’s almost worse.  That was the madness induced by Lovecraft’s storytelling style; by leaving the threat someone amorphous it adds to the terror.  I would argue that it’s the best cliffhanger of the story.  But the entire story feels more like an adventure for Quatermass, not the Doctor.  To imagine this as a children’s show is hard to get one’s head around.   Quatermass is generally considered a bit more adult, at least here in the US (at least to those who know Quatermass) and it would fit that universe perhaps better than the Doctor’s.  If nothing more, it would not offer yet another weird event to happen around Mars in the Who universe!

Ambassadors doesn’t have a monster in the typical sense, and that also adds to it.  It’s a good story, but it is slow.  It’s believable drama, but not a good story for a young viewer; it takes too long for things to happen.  But it did give us back a promoted Sergeant Benton, so it has that going for it.  Now if only Cornish would sing into that microphone.  I swear I see Huey Lewis when I look at him and hearing him sing to the astronauts would have changed the whole atmosphere of the story…   ML

Read next in the Junkyard… Inferno

7 Responses to The Ambassadors of Death