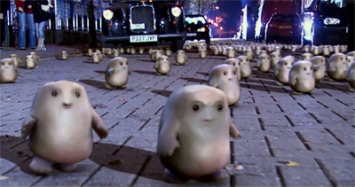 As we have come to expect, the 30th series of Doctor Who opens with a light-hearted, comedy episode.  Why mess with a winning formula?  The reintroduction of Catherine Tate as Donna makes this kind of episode especially effective, as she is obviously brilliant at making us laugh.  Her comic timing is impeccable, and Russell gives her plenty of good lines to work with.  After 45 years of the Doctor hardly ever changing his clothes, Donna becomes the first ever companion to point that out to him: “don’t you ever change?”  She comes on board the TARDIS with a car-load of suitcases, including a hat box, and her misheard line, “you just want to mate?” stands as the funniest, magnificently delivered line of her series.  The Doctor and Donna communicating by mime through two windows is hilarious, and very impressive considering Catherine Tate had to come up with most of the unscripted hand movements herself on the day.

Unlike her two predecessors, she does not seem to be physically attracted to the Doctor (“you’re just a long string of nothing – alien nothing!”), which makes a nice change, immediately slicing away all the angsty stuff for most of the series.  That is not to say that there is not room for emotion in their relationship, as she is clearly in awe of the Doctor and has spent the last year or so longing to find him again, drifting through her purposeless life.  Despite her flippant words, the Doctor is important to her, but she is just the kind of person who expresses herself through irreverent humour.  And here we discover the sadness in her heart that has led her to create that comedy shell: her mother is making her feel like a failure:

I thought you were only moving back for a couple of weeks. Look at you. I mean, you’re never gonna find a flat, not while you’re on the dole. And its no good sitting there, dressed up, looking like you’re job hunting. You’ve got to do something. It’s not like the 1980s. No one’s unemployed these days except you. How long did that job with Health and Safety last? Two days, and then you walk out. I have other plans. Well, I’ve not seen them. And it’s no good sitting there dreaming. No one’s going to come along with a magic wand and make your life all better.

Donna has no answer to this, and sits there blankly as if she has heard it all a hundred times before.  So now we begin to understand the comedy character that is Donna.  Humour is often a coping mechanism.  Catherine Tate is perfectly capable of some of the most incredibly truthful emotional acting, as we will soon discover, and we should not forget just how lucky we were to have her for a whole series, one of the most remarkable casting coups Doctor Who has ever achieved.

There is a hint of the serious, emotional acting to come from Tate in her scene with Bernard Cribbins on the hillside.  It is one of the most beautiful moments of the series.  It is also wonderful to have Bernard Cribbins back again, after his lovely cameo at Christmas.  His first brush with Doctor Who was in the second Peter Cushing film in the 1960s, in which he was a de facto companion.  How fitting that he should finally get to appear in the BBC series as well, not just as a one-off as we originally thought, but as a recurring character.  Wilf is a lovable character, hugely optimistic and young at heart.  His jubilation at seeing Donna fly off with the Doctor is a joy to see, and the other side of the coin to the reactions of previous companions’ families.  He even does a little victory dance!

I have focussed entirely on two characters here, but they really are the heart and soul of the episode.  The Adipose are superficially just a comedy monster in the same vein as Cassandra or the Abzorbaloff, although some jeopardy is necessarily introduced with the threat to a million people’s lives, and they have an element of body horror to them, mild though it is.  They continue Doctor Who’s critique of the consumerist society that goes right back at least to Terror of the Autons, with its killer phone cables and chairs, plus many examples more recently such as the televisions in The Idiot’s Lantern.  People buy the means of their own destruction.

The Adipose are intentionally very cute (it is a shock to see some get squashed by a taxi!), chattering away in their little voices and almost dancing along the streets: a dream for toy licensing.  For an entirely-CGI alien they are very well done.  The human(oid) face of this week’s villainy is Miss Foster, played by Sarah Lancashire in another bit of Doctor Who big-name casting.  Her sonic pen is a questionable inclusion.  The sonic screwdriver is such an iconic part of Doctor Who that for anyone else to be shown in possession of a similar device cheapens it.  Only the Doctor (the wizard) and one or two select companions (the sorcerer’s apprentices) should have a magic wand.  And he must be a magician, or how else would he pull Donna to safety when she is hanging on to that cable?  He gets hold of the bottom of her legs, the scene cuts away and then we see her safely in the room. But if she had let go in that position, she would have flipped over backwards and hit her head on the wall below, assuming the Doctor could manage the super-human feat of keeping hold of her.

Here we are, right back with the balance from 1989 restored, all the romance and unrequited love swept away.  The Doctor/Merlin is travelling with his best mate Ace/Donna, and although she doesn’t know it, she is in training, working towards her destiny as a pseudo-Doctor (Time Lady/DoctorDonna).  The sorcerer has his apprentice, but for now something much more important has happened.  The Doctor has a friend.   RP

Season openers tend to be a little weak.  That’s the problem we run into with having only 45 minutes to introduce everyone and everything, including a plot, new monsters, new companions and sometimes even a new Doctor.  Hopefully we even capture a few new audience members along the way.  The trick is the writer has to trim the fat as much as possible from the story and that’s hard when exposition carries so much weight.  Typically, openers are not bad, but they lack the meat from the story that we really crave.  Season 4 had the additional challenge of having to reintroduce us to Donna Noble and convince the audience that she wasn’t the same irksome pseudo-companion we met over a season earlier. That would take more time out of those precious 45 minutes.  In point of fact, Partners in Crime clocked in at closer to 50 minutes, but the point is no less valid.  So did Partners in Crime pull its weight?

Well, as a matter of fact, the episode is extremely lightweight and lacking in logic in ways that I’ll explain below.  The threat is thin and, to quote myself “it doesn’t make sense”.  The bulk of the episode is getting the Doctor to see Donna for them to start traveling together again.  When they finally do find one another, the scene is absolutely hilarious.  It’s barely a couple of minutes in length but it makes the episode.  The escape sequence on the windows cleaner’s platform is exciting and fun.  The whole sequence is utter slapstick but it makes the episode totally enjoyable.   Tate and Tennant are a great team.  The comedy continues with such great lines as “I can’t believe I’m waving at fat” or the delightfully comical exchange “I just want a mate”, “You just want to mate??!?!”   And the episode also starts a season long arc that brings Rose Tyler back and looks for some missing planets.  Overall, not bad.  Certainly better than New Earth, right?

But my infamous “it doesn’t make sense” takes the cake, eats it, then buys and eats another one because it started a treatment from Adipose Industries and can afford to.  The plot not only doesn’t make sense, but it actually makes the Doctor public enemy number one.  I can hear the Doctor reading this, “What?  WHAT?  WHAT?!!!”  Yes, public enemy number one, I say, because the “villain” of the piece would be viewed as the savior of all mankind.  Imagine this: eat everything you love and with one pill, the weight just walks away, literally.  You’re telling me, I can eat anything, and not gain weight because some weird alien species wants to harvest my fat and it can be done without killing me?  For just a little discomfort, it will plop right off and walk away, waving, with one cute little tooth sticking out all the while?  And the Doctor stops this?!?!?  Which of us should be saying “what?” over and over again?  I ask this, pining for ice cream like a man wandering the desert desperate for water!  Who says this is a bad idea?  Never becoming overweight amounts to something wonderful.  Ask any airline passenger!  Or anyone who enjoys Broadway plays but has to carry a crowbar with them to get into and out of the seats!  Why would the Doctor stop this… Whyyyy?

[After a bout of uncontrollable sobbing…]

Now, the death of the nanny is funny, watching as she Wile E. Coyote’s to her death, but it is making fun of a rather painful demise nonetheless.  I’m not sure it’s a victory because the Doctor and Donna just sort of walk away, leaving others to deal with the [ahem] fallout.  While the Doctor is the ultimate in teenage kids who don’t clean up after the mess he makes, this one is a bit different.  A woman has just plummeted to her death, splattered all over the ground and all he can do is walk away to mate.  I mean, talk about having a mate.

Partners in Crime is one of the weaker science fiction/fantasy stories in Doctor Who’s long history, but it’s a lot of fun anyway.  A little like The Romans from back in the William Hartnell era complete with missing one another by seconds, you can’t watch this one without laughing out loud.

Read next in the Junkyard… The Fires of Pompeii