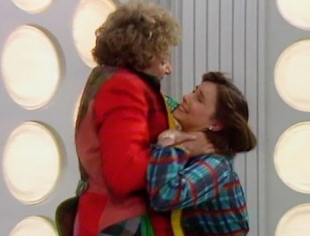 The first time a child sees his or her Doctor regenerate is a difficult moment.  It relies on the new Doctor capturing the imagination quickly, to keep the child invested in the series.  Unfortunately my own first experience of regeneration was the atrocious eight-week run of The Caves of Androzani and The Twin Dilemma.  I didn’t come back for the next series (but as you might have guessed by the existence of this blog, I came back eventually!)

Let’s just start by acknowledging that every problem I am about to point out with this story would have had less impact if it was part of a really fun, exciting story.  Drop Colin’s debut Doctor into, well, just about anything from the McCoy era, and you would still have a disaster but one that is far less noticeable.  With a tedious story as well, everything that goes wrong with the Doctor is thrown into sharp focus.  There are no welcome distractions.  I also want to make it clear that little of what happens in this story is the fault of either of the lead actors, both of whom are completely magnificent when they are given some decent material to work with.

The problem here is a combination of odd decisions.  Each are justifiable in isolation to some extent, but they add up to a disaster.  We have the post-regeneration trauma, which is always a bad idea.  It amazes me that writers persist with that frankly rubbish idea 30 years after The Twin Dilemma, to the detriment of nearly every regeneration story.  But you can see the thinking behind it.  If you look to the past, especially through the lens of the 1980s, it is not difficult to see how a writer might look at the exciting mercurial eccentricities and unpredictability of the Second and Fourth Doctors in The Power of the Daleks and Robot and think that’s a good way to go.  What the 80s regenerations do wrong is to take that idea and go really big with it, stretch it out over multiple episodes rather than just the first few minutes, and cross the line from mercurial to annoying.  The Twin Dilemma goes a step further, crossing the line from annoying to revolting.

Then we have the decision to do the opposite to Davison’s debut, requiring Colin Baker to record his first story first and hit it out of the park first try.  He has four weeks to make us accept him, and then a break between seasons.  The thinking behind it is a kind of warped logic that assumes viewers will not be interested enough to come back to a new series to see what the Doctor is like (despite all previous evidence to the contrary), but will be loyal enough to come back to the next series despite not actually liking the new Doctor, which is a nonsensical contradiction.

And that brings us to the worst decision of all, unbelievably one that has been repeated since albeit to less disastrous effect, to make the new Doctor unlikeable.  The idea makes sense if you kind of squint at it, some kind of vague attempt at a character arc where he mellows over time.  But there are two big problems with that.  Firstly that arc starts at the end of a series, but more importantly there was no coherent plan anyway, beyond that kind of sketchy idea.  If Eric Saward had planned out a succession of plot beats, running through this story and the next season, in which the Doctor gradually mellowed thanks to his friendship with Peri and realised that morality is universal and being an alien really isn’t an excuse, well, it would still be a terrible idea, but at least there would be some point to it.  Instead he just leaves the writers to gradually get less-worse at writing for Baker than the first attempt.

Of course, it’s one thing to make the Doctor a little darker, edgier, less predictable, unclear in his motivations.  It’s quite another to make him abusive.  There has tended to be a drive to make each Doctor a contrast to the previous (another largely stupid idea, particularly when you have a formula that works and then do the exact opposite).  That’s fine, if what you can do is to say to the audience “yes, he was great… but this one’s even more great!”  What we have here instead is the new Doctor criticising the old one, and what he criticises throws him into a worse light.

PERI: You were almost young. I really liked you. And you were sweet and…
DOCTOR: Sweet? Effete. Sweet? Sweet? Sweet? Huh, that says it all.

“Effete”.  Let’s think about what the Doctor is saying here.  He sees his previous incarnation as effeminate, weak, unmasculine.  He is verging on homophobia here, and then behaves like a physically and mentally abusive husband to his companion.  And he breaks her. Look how she smiles at the end, just because he has moved from being abusive to merely being a moron.  The smile of relief of a victim who isn’t being strangled any more.

What we are supposed to think about all this is that the Doctor is not himself during this episode, so that’s fine.  That was the idea behind it.  But look what happens when he is fully recovered:

DOCTOR: You may not believe this, but I have fully stabilised.
PERI: Then I suggest you take a crash course in manners.
DOCTOR: You seem to forget, Peri, I’m not only from another culture but another planet. I am, in your terms, an alien. I am therefore bound to different values and customs.

And that was the point at which I decided that I wouldn’t be coming back to Doctor Who the next year.  Because even a child could understand that there was something deeply wrong with this abusive pig of a non-Doctor justifying his actions by having “different values” rather than actually apologising for them.  If these were the different values that were going to be explored from now on, I wanted no part of that.  My hero was dead, and a monster had taken his place.  A monster in a really ugly coat.   RP

If Hell Bent is the worst episode of New Who, The Twin Dilemma is surely the worst of the classic series.  For all the magic that was the original series during my childhood, there was something terribly wrong with Colin’s first story.  Maybe it was the Bobbsey Twins, Frick and Frack.  They were annoying in the same way Jim Carey was in Dumb and Dumber.  I’ve heard it said that there are not that many great child actors in Britain, but for Colin Baker’s first story, they looked for any random twins they could find.  And it would be hard to find worse.  But hey, we could ignore that in favor of a good story.  Hahahah… as if that were likely!  Why introduce the new lead with a good story, you might ask?  New Doctor Who fans, you’re probably wondering what made it so bad, beyond those kids, right?  Well…

Perhaps it was Mestor, the cross-eyed slug who ruled with a mucus covered fist and arms only a T-Rex could love. He has the brilliant plan of solving an equation that would cause Jaconda’s sun to explode with the express intent of spreading his eggs through the universe.  Because, you know, when a planet explodes, all things on it just get thrown into space and not… I don’t know… obliterated!   I could almost hear him singing a la Burt Bacharach, “what the universe needs now, is slugs, sweet slugs!”  Or maybe it was the Doctor’s old friend, Azmael whose death was so overly dramatic that it lost any hope of believability.  News flash: you can’t have a character turn up having never been mentioned before, only to die and expect the audience to have any feeling for the guy.  It doesn’t work!  If not him, then perhaps it was Hugo Lang – maybe his inability to be a compelling James Bond character hurt the episode, wearing the legendary Blouse of Flamboyance.  Or his Mr. Spock haircut gone wrong.  Or perhaps Chamberlain who, upon seeing The Dark Crystal, chose his name and acted with all the same loathsome underhandedness of his puppet namesake.  (Well, at least my sister will get that reference!)

No, wait, I’ve got it!   I think it comes down to the idea that I addressed in my social responsibility article: the hero of the series must be heroic.  Strange idea, right?  For some reason, the writer Anthony Stevens felt the best way to introduce a new actor in the role of the Doctor was to make him immediately unlikable.  Sound counter intuitive?  Sure.  Here’s the thing: life tells us time and again that first impressions are very hard to shake.  Make a good first impression and you’re golden.  Make a bad first impression and you get axed from a series and send the show into a spiral from which there is no recovery without waiting 20 years.  That mistake plagued Baker throughout his tenure.  Coupled with his coat of many colors, the series was being condemned into a niche that was bound to be run out of town like a common pygmy.  It was just a matter of time.  The Doctor’s disagreeable attitude manifest in his attempted murder of his companion by strangulation; a particularly nasty form of murder!  (Is there a way not to be nasty when murdering someone, I hear you ask.  Talk to the Deadly Assassin…)    To make it worse, it’s only through pure idiocy that Peri, rather than actually try to defend herself, shows the Doctor a mirror that makes him aware of the horrific act he is committing.  Basically it’s some half-understood idea about evil recoiling at its own reflection but in case you didn’t get the memo, like Anthony clearly didn’t, the Doctor isn’t supposed to be the bad guy; he shouldn’t be evil.  He shouldn’t have to recoil from his own reflection.  This was regeneration trauma ramped up to the max and it could have been avoided with even a fraction of a thought on the part of the writer!  And where is the script editor to say, “this is a joke right?”

If The Twin Dilemma has anything going for it, it comes down to one thing: colors.  It’s very colorful.  A coloring book should be released strictly for this episode. If that sounds more like a backhanded compliment than a genuine one, well, yeah… it is.  The new opening and the colors were nice.  Every cloud has a multicolored lining, apparently.  But it leaves me with a dilemma: do I review this story against the whole series or against classic Who only and depending on that answer: where does Hell Bent fall in relation to this?  They are both equally terrible episodes but for different reasons.  Oh look, I guess I too have …a twin dilemma!   ML

Read next in the Junkyard… Attack of the Cybermen

Author of windowsintohistory.wordpress.com Co-writer on junkyard.blog Editor of frontiersmenhistorian.info
View all posts by Roger Pocock →
This entry was posted in Doctor Who, Entertainment, Reviews, Science Fiction, Sixth Doctor, Television and tagged Colin Baker, Peri, The Twin Dilemma. Bookmark the permalink.

9 Responses to The Twin Dilemma