What is Who? A Cosmic Hobo 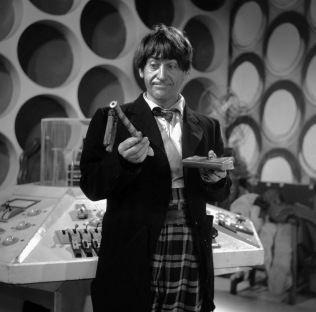 When I first became a fan of Doctor Who, I quickly realised that some of the Doctors tended to get referred to with soundbites, little descriptions that were generally superficial and focussed on their appearances.  They cropped up again and again in books, magazine articles, fridge magnets.  So the Third Doctor was a “dandy”, the Fourth a “bohemian”, the Fifth a “young old man”.  That kind of thing.  But the one that really got repeated over and over again was “cosmic hobo”, to describe the Second Doctor.  It was actually a term coined by Sydney Newman, when he was sketching out the character and appearance of Troughton’s Doctor, and it went hand-in-hand with another description used for Two: “Chaplinesque”.

So, to take this right back to its origins, Charlie Chaplin created a characterisation for The Tramp (1914) from the hobo clown tradition.  There have been many different kinds of clown over the years, but the sad, scruffy, homeless clown has always been one of the most popular.  This is why the First Doctor insults his replacements as “a dandy and a clown”, which might seem puzzling until you realise we’re not talking buckets of custard and flowers that squirt water here.  We’re talking Chaplin’s hobo clown.  Here’s how Chaplin envisioned his character:

I thought I would dress in baggy pants, big shoes, a cane and a derby hat. everything a contradiction: the pants baggy, the coat tight, the hat small and the shoes large.

Troughton’s Doctor is modelled along the same lines, visually at least.  His coat and trousers are too big, and his trousers are held together with a safety-pin.  But what is the point of the Doctor looking like he is living in poverty?  Let’s take a step back, and look at exactly what “cosmic hobo” means.

Cosmic (adjective):
Relating to the universe or cosmos, especially as distinct from the earth.
(Oxford Dictionary)

So that bit’s pretty straightforward.  The etymology is Greek, “kosmos”, meaning “order” or “world”.  But when we try to drill down into the meaning of hobo, things get a bit more complicated.

…but that isn’t exactly right.  To understand that we need to look at where the word comes from.  “Hobo” originated in the Western USA towards the end of the 19th Century, and was used to describe a person who was actually quite distinct from a “tramp”.  There was a hierarchy of homeless at the time:

The etymology is unclear, but probably comes from some kind of a greeting “ho boy!” or “ho beau!”, or some kind of contraction of “homeless boy” or “homeward bound”.  So a hobo was a worker of no fixed abode, typically working on the railroads in the latter half of the 19th Century.  Many of them were probably veterans of the American Civil War.  These were people who perhaps had the appearance of a vagrant, but commanded a degree of respect that a “bum” or a “tramp” did not.  What sets a “hobo” apart from anyone else is therefore one thing, and one thing alone, and it’s nothing to do with unemployment.  It’s homelessness.  A hobo was a wanderer.  Just like the Doctor.

Long before the Second Doctor showed up, there were examples of the Doctor being defined in terms of being a hobo, despite his appearance as a smart Victorian gentleman.  Right from the start he is established as a “wanderer in the fourth dimension” (An Unearthly Child).  Then, in The Myth Makers, a strange thing happens that foreshadows the future of Doctor Who.  The Doctor is mistaken for Zeus, but Achilles describes him like this:

ACHILLES: To Europa, you appeared as a bull. To Leda, as a swan. To me, in the guise of an old beggar.
DOCTOR: I beg your pardon. I do nothing of the kind!
ACHILLES: Oh, but still your glory shines through!

…and that’s quite important, because the Doctor is already being established as a godlike being in disguise as somebody very ordinary.  So if the Doctor is some kind of a hobo or vagrant, then a good way to establish danger is to show another of those being menaced by the monster of the week.  The War Machines does that, with a tramp killed off in the warehouse where the War Machines are being constructed.  During the Pertwee era, with the Doctor thoroughly losing his hobo status, the series has a troubling approach to homelessness.  The Doctor is no longer a wanderer, and is now at home amongst the establishment, and when this happens the series starts treating tramps as comedy characters, such as Pigbin Josh in The Claws of Axos (killed off) and the tramp having a sleep on the grass in Planet of Spiders (humiliated for a laugh).  But look what happens the moment the Doctor regains his freedom from the Time Lords in The Three Doctors.  In the very next story, Carnival of Monsters, Pletrac describes the Doctor as a “vagabond”, and he agrees: “oh yes, yes, very much so”.

Naturally, the Second Doctor is also described as a “vagabond” as well, by Solicitor Grey in The Highlanders.  Then, in The Ice Warriors, the Doctor and his companions are tagged as “scavengers”, which Jamie objects to: “here, we’re not beggars”.  Describing the Doctor in terms of a vagrant continues throughout the Classic Series.  Adrasta calls the Fourth Doctor a “demented space tramp” (The Creature from the Pit – note how nearly synonymous those last two words are with “cosmic hobo”).  In Dragonfire, the Doctor asks Mel to remember him as “the homeless traveller and his old police box, with his days like crazy paving” and we get another near-synonym for “cosmic hobo” in Remembrance of the Daleks, when Rachel describes the Doctor as a “space vagrant”.  As the Doctor most purposefully modelled on the Second, it seems suitable that the Seventh is most often referred to in terms of being some kind of a tramp, but as his era progresses he starts fighting against the assumption, steadily changing into a different sort of Doctor, so by the time we get to The Greatest Show in the Galaxy he is not so keen to accept the “hobo” label: “we’re not the kind of hobbledehoys and vagabonds you take exception to”.  Just for the avoidance of confusion, “hobbledehoy” is not another word for a tramp.  It would better describe a particular kind of Doctor Who fan rather than the Doctor himself.  Like Whizz Kid, it’s an insult that focusses outwards rather than inwards.

The new series restates some of these ideas.  Hame goes back to basics in New Earth, describing the Doctor as a “wanderer”, and in The Runaway Bride the Doctor says he is “sort of homeless”.  Predictably, with Capaldi modelling his era on that of Pertwee, his Doctor has a less positive approach to the theme.  Once again tramps are there to be terrorized, rather nastily by the Doctor himself in Deep Breath, but this already starts happening before the Twelfth Doctor turns up, with the tramp terrified by River as a regenerating child in Day of the Moon.

Occasionally the theme is extended beyond the Doctor himself.  In The Visitation Richard Mace is a homeless “itinerant”, and is treated as a pseudo-companion throughout the story.  In The Leisure Hive, we get what I believe is the only use of the word “hobo” ever in Doctor Who (correct me in the comments section if I’m wrong), used as a way to belittle the Black Guardian by bringing him down to the Doctor’s level, with a touch of irony:

Some galactic hobo with ideas above his station. The cosmos is full of them.

That so nearly says “cosmic hobo”, doesn’t it, but the expression remains frustratingly just out of reach.  Constantly said behind the scenes, but never on-screen.  The unspoken definition of the Doctor.

What is Who?  A Cosmic Hobo.

…until the next article in this series, in which I will try to illustrate why it is actually something else altogether.   RP

Author of windowsintohistory.wordpress.com Co-writer on junkyard.blog Editor of frontiersmenhistorian.info
View all posts by Roger Pocock →
This entry was posted in Doctor Who, Random Chatter, Science Fiction, Television, What is Who? and tagged Cosmic Hobo, Patrick Troughton. Bookmark the permalink.

1 Response to What is Who? A Cosmic Hobo