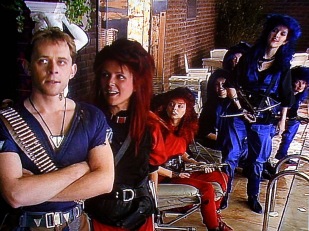 It has been two and a half years since we last had a Doctor Who story that didn’t feed off continuity in some way, but Andrew Cartmel is our new script editor for this series and he is setting about making Doctor Who “about something”.  The last time we saw this kind of approach was Vengeance on Varos, but this is a far superior effort, adapting the “something” it is about for the appropriate audience rather than focussing unflinchingly on the nastiness.  This could so easily have fallen into the same trap as Varos, forgetting its demographic, because the inspiration seems to be High Rise by J.G. Ballard.  In his 1975 novel, life in a tower block descends into anarchy and murder, and one of the characters travels to Floor 40 to confront the architect of the building.  So Paradise Towers is about a dystopia in much the same way as Varos, but properly integrates that into Doctor Who in a bizarre and brilliant genre clash.

To take this right back to its roots, Britain in the mid 20th Century had a relatively brief flirtation with a form of architecture called “brutalism”, which was an attempt to break from the past and make no concessions to classical notions of aesthetics.  It sprang up post-war in Britain, and note how Paradise Towers is a post-war vertical landscape.  If you want to learn more about this, I recommend Jonathan Meades’s documentary Bunkers, Brutalism and Bloodymindedness.  In fact, I recommend anything presented by Meades, a genius in his academic field, but also a genius in the visual medium of television.  The poster boy for brutalism was the tower block, and so many of them have since been pulled down that Ernő Goldfinger’s Trellick Tower in London (completed in 1972) is now a Grade II listed building, despite the architect’s name sounding like a Bond villain.  One of the main objections to this style of architecture is that it goes big on functionality and order, but fails to provide a good quality of life for the residents.  Everyone just gets placed in their little box.  Paradise Towers goes big with this, with the Caretakers focussed on the efficient running of the building rather than the welfare of those who live there.

The use of a tower block to tell a story is that rare thing in Doctor Who: a brand new idea.  It creates a sense of scale and allows the story to be told within a vertical space, something very unusual, with special significance placed on the two extremes of the building, the swimming pool on the 304th floor, and the basement.  The action taking place within a vertical space doesn’t just create scale, but also creates claustrophobia as well, a highly effective use of the studio-bound format.  This is the best of both worlds, and it is Doctor Who taking a limitation and turning it into a strength, something that it will increasingly start doing throughout the McCoy era.

Within this framework, the amount of ideas Stephen Wyatt packs in is stunning, about double what we would expect for a Doctor Who story at the time, and each and every one of his ideas is enriched by the genre clash, hitting gloriously discordant notes.  At times this happens by accident.  Pex and all the Kangs are incredibly miscast, with Pex supposed to be a cowardly muscle man, and the Kangs teenagers who have had no adult influence since infancy.  That almost (but not quite) works in the story’s favour, by adding to a twisted sense of wrongness.  The Kangs in particular work better with older actors than we would expect, with their circumstances having locked them into a childish outlook.  Note that their colours are those of the Conservatives, Labour and Liberal Democrats, but there is no material difference between the gangs, which functions both as a commentary on politics but also as an indication of the futility of their gang culture.  Their differences are non-existent beyond the superficial.

Richard Briers plays an absurd Hitler-parody (Hitler of course loved modernist architecture, of which brutalism is a subset), and yes, he clearly doesn’t give his role in Doctor Who the respect we would like an actor to give it, but Paradise Towers is just about the only kind of story a hammy villain can function within.  It’s not ideal, but the overacting is not massively out of place within a story in which everything is being portrayed as a bit wrong and twisted.  Besides, there are other characters who are genuinely frightening: Tilda and Tabby.  This is a story told from the perspective of an oppressed youth, with the older generation quite literally portrayed as a static, non-productive, canibalistic drain on the younger generation.  It is stunningly subversive and dark, but the colourfulness allows the darkness to thrive beneath the surface, troubling the viewer without breaking what Doctor Who actually is.

As a step forwards from Time and the Rani, this is massive, and that was also in itself a huge improvement on what came before.  We’re travelling rapidly upwards through the levels of what Doctor Who can achieve.  Not so long ago we were down in the basement, with The Twin Dilemma.  The Colin Baker era struggled to reach higher than the first few floors, but all of a sudden we are hurtling upwards towards to top floor.  Unlike Mel, we won’t find a swimming pool there, but we might just be taking a dip into some water anyway…  RP

After a first episode that I was very happily surprised by, Sylvester McCoy’s Doctor takes Mel to Paradise Towers for a holiday.  Now, I’m sure there was some allegory built in about people living in luxury and still being isolated from one another, but this story did absolutely nothing for me so I missed any potential allegory that was built in.  And it’s a shame, because I’ve said it before: McCoy’s seasons were based on halves: with 4 stories per season, 2 were typically very good and 2 were typically very weak.  His second story inspired no confidence at the time.  This may have been the fault of then-producer John Nathan-Turner’s having intentionally hired a writer who never worked on the show before.  The man, Stephen Wyatt, had no idea what to do with the show, to the extent that he didn’t have a regular monster.  So to compensate for this, we had a pool cleaning robot which, sort of like Aquaman, really never amounts to much of a threat since all you have to do is get out of the pool.  (Modern DC stories understand that Aquaman should be able to get out of the water, but we’re not talking about the modern era!)  The hall cleaning robot is a cousin of The War Machines, again coming off as inept in the extreme.  It should be the easiest thing in the universe to avoid them.  I’ve said this before too: move to the right, let it rotate, repeat until the battery drains.  This is why action figures have arms that can move in multiple directions: to be able to grab another action figure during a fight!  (Well… that’s what I would do!)

Then we have a battle between the two groups of Kangs; a group of women who fight over which color is better, red or blue!  (Living in America, we know we can’t have one without the other, and the timid Pex may add the needed burst of white to complete some hidden motif if only he were dressed in something white!)  Since we don’t know when or where this story takes place, maybe it’s alright that their language has devolved where one can be made unalive, but it’s still a tough pill to swallow.  Admittedly, I’m still trying to figure out how the same happened with the garbage clan in The Walking Dead after only a few years of the undead virus outbreak, but at least in Paradise Towers we don’t know how far into the future it is or how much  has changed in that time.  Still, the Kangs are not an easy lot to like because of their devolved language and idiotic attitudes.  The Great Architect is literally neon lights until he transfers his mind into the chief caretaker.  As neon lights he’s about as scary as a sign in Manhattan.  Admittedly some of them are a bit obnoxious, but scary?  And the chief caretaker looks far too much like Hitler with that small mustache and military attire which creates an instant enemy whether he was going to be one or not, although let’s be honest; we knew he’d have to be considering how he looks.  Time Lord forbid we actually subvert the idea that ugly is evil.  The only subversion of this we really get is the two old women who seem so kind but really are cannibals planning on eating Mel.  Of course, what they hope to gain by eating Ms Stick and Bone, is anyone’s guess.  They don’t seem to mind annoying their stomach!   Back to the Caretaker, the worst part is that they make a caricature of him once he embodies the Great Architect.  His jowl munching and dopey expressions when Pex tackles him take away any serious message about the evil this character should represent.  All it achieves is making a martyr of Pex so the Kangs can rally together and mourn him.  The guards are also no better when it comes to caricatures, being half-witted at best, unless there is such a thing as quarter-witted.  I expect the Doctor could pull the Monty Python skit on them with minimal effort.  OH, wait, sorry… he did!  They are utterly incapable of thinking beyond what is written for them in a book and the Doctor is able to use that to his advantage.  But when an enemy is that dumb, having the Doctor outwit them seems like a waste of the Doctor’s talents.  Let one of the Maitland kids land there and let the Doctor go off on an actual adventure.    Then we could avoid having to take them to the amusement park or they’d defeat Kroagnon for the Doctor and all would be well.

And that’s about all there truly is to say about it.  Seeing the TARDIS painted red is about the highlight of the episode.  Perhaps if we look hard enough, we see the message about being brave like the third Doctor once explained to the Thals: courage isn’t about not being afraid; it’s being afraid and doing what we have to do anyway.  Pex embodies that idea in the end and it works as a nice little piece of morality, but little else.   McCoy’s first season is too silly too often and this episode does nothing for his overall image.  It’s not until they started to realize he could be a force to be reckoned with that the Seventh Doctor really came into his own, and unfortunately that might have been a bit too late!   ML

Read next in the Junkyard… Delta and the Bannermen