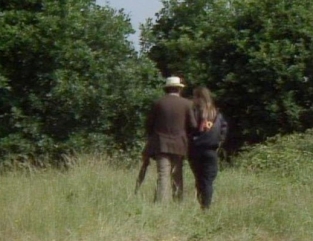 Survival is the final story of the Classic series of Doctor Who.  Remarkably it manages to bookend the series thematically and foreshadow the revival to come, and it does both of these things by accident.  We are back in contemporary suburban London, where Doctor Who has rarely been for a very long time, and just like An Unearthly Child people are abducted and have to survive in a primal landscape.  The difference is that this time round it is the Doctor who is trying to fight the kidnapping rather than being the kidnapper.  And whereas in An Unearthly Child he needed his new companion to stop him bashing in somebody’s head, here he is able to stop himself from doing it.

So much for the bookending with An Unearthly Child.  The foreshadowing of Rose is actually a lot more interesting because it is the result of a writer who is far ahead of her time, to the extent that she will become the only Classic series writer to return post-2005.  This is contemporary London with a realism that goes far beyond sticking monsters in front of landmarks, there is some attempt to explore the consequences of a companion dropping out of the world and then returning, and Ace gets a conclusion of sorts to her story arc.

Ace returns home a different person to the one who left, and finds truth in the expression popularised by Thomas Wolfe: “you can’t go home again”.  After Ace had to remind the Doctor that she is “not a little girl” any more in The Curse of Fenric, here she has a pretty obvious attraction to Karra, which was entirely deliberate.  In fact, writer Rona Munro was disappointed that this ended up a little less explicit than it should have been, due to the Cheetah People costumes, which she envisioned as much more subtle, but the intention is clear enough.  So this is all modern storytelling that we would recognise from the newer episodes of Doctor Who, with some strong character development for the companion, but the real genius in the storytelling here is Ace gradually turning into a Cheetah Person.  This kind of thing is remarkably rare in the Classic series, and when it happens it is always unequivocably a negative development and generally the result of possession (e.g. Tegan in Kinda).  The new series will make the Doctor or the companion a part of the world of the “monsters” far more often (Auton Rory, the Ganger Doctor, Angel-infected Amy and the whole Bill/Heather arc, to take a few random examples).  In so many ways Survival is more like a pilot for 21st Century Doctor Who that came early rather than a conclusion to the Classic series.  How very like Doctor Who to be looking forward at a time like this.

Just as The Curse of Fenric took the idea of the Cold War as the inevitable outcome of the Second World War and rejected that, Survival rejects Social Darwinism and the modern misunderstanding of the term “survival of the fittest” (which is not to do with “fitness” in the way a lot of people assume).  The mouthpiece here for all the kill-or-be-killed and the-strongest-prevail philosophising is Sergeant Patterson, who talks a good talk but is utterly humiliated when he is thrown into a real survival situation and struggles to cope.

In a much more intelligent use of the Fisher King legend than the nominal one we will eventually get in Before the Flood, the landscape of the Cheetah world is changing to reflect its ruler, and the violence is going to destroy their world completely if it doesn’t stop.  This finally allows for the inclusion of the Master with some point to him, rather than just as a moustache-twirling villain.  He has corrupted the world, and is being corrupted by it.  The Doctor faces a far more dangerous situation than he usually does, because simply defeating the Master (which is easy for him by this point) will destroy both of them and the world they are in.  Both the Doctor and Ace face difficult problems that threaten to destroy them, and the solution for both is the same: reject the story and go back home.

Ace can be a super powerful cat woman.  The Doctor can be a superhero who destroys his archenemy.  Both of them turn their backs on all that, and instead choose to carry on being Ace and her Professor, wandering around the universe in an old blue box.

And at the end of a run of stories that have been more consistently brilliant than Doctor Who has managed for well over a decade, with a maturity of storytelling decades ahead of its time, the lights get switched off on Doctor Who for a while.  The tea’s getting cold…   RP

I may have to revise a statement because I think season 26 was the exception to the McCoy rule of halves!  Even the weakest story, Survival, is quite strong in its own rights; not one of the stories from this season do I find tough to sit through.  Battlefield and Survival both have their share of issues but each felt new and exciting in their own ways to still warrant above average ratings.  And so, McCoy wraps his tenure with a strong season!  It’s a shame, because just when he was getting particularly good, they canceled the series.  In the case of Survival, it might have had something to do with being an ending.  We fans would be entering a period we called the Wilderness years; an absence of Doctor Who on our television screens, for 16 years with only a 90 minute hiccup with Paul McGann in 1996.  Beyond that, we’d have to rely on the book ranges, The New Adventures and The Missing Adventures, to keep us going.  But at the time, we had no idea if it would ever come back so you can imagine our joy those 16 years later!

But I’m jumping the gun.  Before we get to the end, we have this story to get through and it’s an interesting one.  Cats have had a long history of mysticism.  Witches keep them as their familiars while some people believe cats can steal their souls while they sleep.   (I’m a ginger, so I have nothing to worry about there!)  The idea of tapping into that otherworldliness of cats was a clever decision on the part of writer Rona Munro.  Their ability to jump to other worlds might explain why I can’t find my own cat half the time.  Its strength probably has more to do with Anthony Ainley’s portrayal of the Master that gave this story such a flare.  The Master is normally a bit of a blunderbuss, announcing his plans in the most over the top way he can.  Not so this time.  This cat-possessed Master is subtle, darker, scarier.  His attire is reminiscent of Dracula and the fangs help that along.  Frankly, had this been the way the Master was normally portrayed, I think he would have been a much more frightening villain.  He sits in his yurt like a spider in a web or, more appropriately, like a cat waiting to pounce.  His glowing yellow eyes stare with intensity and ferocity.  And he has a line that ended up being very true.   When the Doctor finds him trying to pick the lock on the TARDIS he says, “But this is the end Doctor”.  Alas, he was right… for a time.

While most of the humans don’t fare as well, Ace comes across very well.  When she begins showing signs of the cat virus, it’s incredible.  Here we are in part 2, and Ace has become one of the enemy, but she doesn’t seem aggressive.  This works as another subtle underscoring of the way this era treated the villain; they had more dimension.  On the other hand, Midge is a smidge of a jerk and doesn’t come off as scary.  His snarling just looks silly but it’s the mindlessness of him that still creates a sense of dread.  He’s operating off instinct alone, and that can be marvelously scary.  Patterson is a bully and little else, though he is Scottish, so that counts for something.  Karra, thankfully, is one of the better characters and unsurprisingly that actress, Lisa Bowerman, would go on to play Bernice Summerfield for Big Finish.  There’s some decent use of comedy in the story too, which often helps even a scary situation along.  It doesn’t detract from the scares, but it does make the story more lively.  And it taught us that we don’t always have to outrun the lion…!

The outdoor filming gives the story a sense of scope even if a good deal of the story remains in a small town for the bulk of the episode.  When we go to the planet of the Cheetah People, it jars violently with the scenery on Earth which creates a larger story for a three part story and manages to feel expansive, which is impressive.  We need to address something else.  Since McCoy started season 26, he changed his coat.  He went from light to dark.  The word of the day may be subtlety because it is a subtle thing, like much of the story, but it matters and this story does a good job bringing that out in the scene when the Master and the Doctor are fighting.  Watch closely: the Master is physically much bigger than the Doctor.   He’s also got the advantage of physically being on top of him, holding him down.  But the Doctor twists the Master’s arm and turns the tables.  He is more powerful, but fights the urge to kill, and in reality, overcomes, which is something the Master could not do.  That little Doctor has a strength that is often overlooked.  And then we get to the end…

The ending has a sense of finality to it which was indeed the case back then for far too long.  That ending speech is melancholic but  it also let us know the Doctor was still out there, somewhere and somehow he’d be back.  Like any good legend, he was indeed going to return.  An issue of Doctor Who Magazine included this poster with all of the Doctors and that sad but wonderful quote.  I have this framed in my basement!  Our hero hadn’t given up, he just needed a long, dark tea-time for his soul, and he would come back even stronger!   ML

Read next in the Junkyard… Dimensions in Time