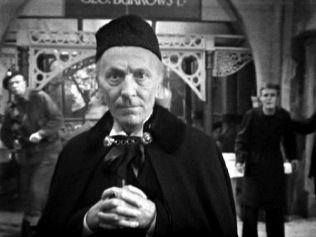 Yesterday we looked at some of the cliffhangers in the First Doctor era, specifically the ones that reveal the monster.  Although these are the most iconic and best-remembered cliffhangers, they are not in the majority.  Most cliffhangers are a moment of danger for the Doctor, one or more of his companions, or the whole group.

When the threat is to the Doctor and his companions, the cliffhanger tends to invite the viewer to speculate on the nature of the threat.  The one I mentioned at the end of yesterday’s article is a good example of that: the TARDIS being dragged down to a planet by an unknown force at the end of The Romans.  In this example the TARDIS is placed in danger, and that can happen either with or without anybody inside.  In the story that follows, The Web Planet, a panicking Vicki appears to dematerialise the TARDIS at the end of the first episode, with the Doctor, Ian and Barbara still on Vortis.  Another good example of the TARDIS in peril happens at the end of the first episode of The Daleks’ Master Plan, with the TARDIS door ajar while Daleks emerge from behind the ship, watched by the Doctor.

Threats to the TARDIS are rare though, as it is generally simply a way to get the Doctor and his companions to a new place.  But note how the example with Vicki dematerialising the TARDIS is all about separating the Doctor and his friends from the TARDIS, taking away their means of escape.  The cant-get-back-to-the-TARDIS cliffhanger happens in the very first Doctor Who story, at the end of the third episode.  The fourth episode of The Daleks is a variation, with the TARDIS accessible but incapacitated due to the fluid link being in the Dalek city.  At the end of episode one of The Myth Makers Odysseus tells the Doctor that his “temple” has “vanished into thin air”.

Once the Doctor and his companions are involved in the story, a common cliffhanger is some kind of a danger that imperils them all.  Yesterday we looked at the first ever Doctor Who cliffhanger, which functions much like a partial monster reveal.  The second one falls into the group-danger category, with the discovery of the skulls split open.  At the end of the story there is another one, with the radiation levels increasing.  Other examples can be found in Planet of Giants 1 (the giant cat), The Daleks’ Master Plan 6 (a poisonous atmosphere) and The Smugglers 4 (“We have arrived at the coldest place in the world!”).

Those last two examples show how contrived this approach can get.  In both cases the threat is not actually a real one, because the Doctor and his companions are safe inside the TARDIS.  There is nothing actually compelling them to venture outside into the poisonous atmosphere (in reality just smog) or the Antarctic.  But cliffhangers are not all effective ones.  These are examples of contrived cliffhangers, which are commonplace throughout Doctor Who but not too prevalent during the Hartnell era.  But they are also examples of a generally weak form of cliffhanger where somebody tells us the plot.  This happens in Planet of Giants 2 (“He’s turned the tap on!”), The Chase 3 (“We must face the facts. The Daleks are closing in on us.”) The Time Meddler 4 (“The Monk’s got a Tardis!”) Galaxy 4 1 (“Tomorrow is the last day this planet will ever see.”), The Daleks’ Master Plan 5 (“I’m afraid, my friends, the Daleks have won.”), and my absolute favourite example: every single cliffhanger ending in The Gunfighters, where the narrator sings the plot!

Rather than everyone being placed in danger, cliffhangers that imperil just a companion or two, or the Doctor and one companion, are much more common.  Typically this allows somebody to be out of the picture, ready to mount a rescue, but this is far from always being the case.  This individual or small group threats can be found scattered throughout the First Doctor stories, for example:

In The War Machines we get something very similar, with the War Machine menacing Ben at the end of the second episode, but note how Ben is not yet a companion at this point.  The cliffhanger functioning as traditional companion-danger helps to establish him in the role.  In The Daleks’ Master Plan we probably get our most fascinating examples.  The third episode ends with Kirksen attacking Katarina.  Stunningly, she doesn’t actually escape from this danger, the first time this happens to a companion.  So the end of the fourth episode therefore takes on a special significance, with Bret killed by Sarah, who then declares that the Doctor and Steven “will be shot on sight, but aim for the head”.  These would normally be empty words, because we know that can’t happen, but having seen the previous cliffhanger resolved by the companion actually being killed, this kind of cliffhanger stops feeling so safe and gains a whole new power.

Although it is not a comprehensive list, something you might have noticed looking at the bullet points above is that dangers to companions tend to occur more commonly earlier in the Hartnell run.  This is because the Doctor starts off as an anti-hero, so the viewers care much more about threats to the companion than threats to the Doctor.  Our first example of a cliffhanger that imperils just the Doctor is in The Edge of Destruction, but that one is really about posing the mystery of who is the mysterious attacker grabbing the Doctor by the throat.  Our first true cliffhanger that invites the audience to worry about a threat to the Doctor, and only the Doctor, is not really until The Reign of Terror 1 with the Doctor trapped in a burning farmhouse.  Other examples can be found in The Romans 1 (an assassin is sent to kill the Doctor) and The War Machines 3 (the Doctor standing up to the War Machine while everyone else takes cover).

Sometimes the danger is just a risk to only one companion, such as Ian’s life being threatened by the Slyther (The Dalek Invasion of Earth 4), or some spikes (The Rescue 1) or Steven trapped in an airlock (Galaxy 4 3).  Often a companion is just seconds from some kind of violent death when the episode ends, which is most common in the historical stories, such as The Romans 3 (Nero tells Delos to cut off Ian’s head) and The Myth Makers 2 (Cassandra tells the guards to kill Vicki and Steven).

So far we have looked at monster reveals, and the Doctor and his companions placed in danger: all fairly straightforward and obvious ways to leave the viewers wanting more.  But there are other ways to do that, which don’t involve such obvious approaches.  As the Hartnell era progressed, some of the writers started to come up with some very clever ways to make us desperate to know what happens next.  We’ll find out about that… next time.   RP