The Hand of Fear 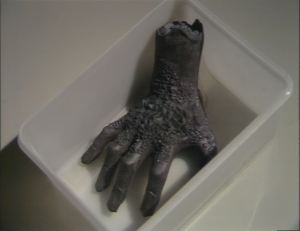 Well, I quite liked her, but I couldn’t stand him.

Never has a companion reflected the views of the viewers more thoroughly.  Judith Paris manages to portray a genuinely alien being in Eldrad. The excellent costume design aids her performance, allowing for the full range of facial expressions, despite the convincingly crystalline appearance. When Stephen Thorne takes over he has to rely on his voice performance, with a costume that allows for much less facial movement.  Vocally he is impressive but, like Omega, he has one setting and it’s loud.

Unless I have forgotten something, this is the first time we encounter another alien race with the ability to regenerate.  Although the means by which it is achieved are different, what happens to Eldrad is functionally exactly the same as a Time Lord regeneration: a change of body and a semi-change of personality.  It is (by accident) hugely ahead of its time, with a gender-swapping regeneration and also one where an incarnation has clearly been modelled on somebody who has come into contact with the person before the regeneration.  Bob Baker and Dave Martin deserve more credit than they tend to get for the intelligence of their writing.  They recognise that the two different locations require very different things of Eldrad.  On earth she has to be clever, cunning, resourceful.  She can’t just shout at everybody.  On Kastria he is reacting to the discovery of the pointlessness of all his plans.  He’s a desperate, raving lunatic of a failure.

So now you are King, as was your wish. I salute you from the dead. Hail, Eldrad, King of nothing.

It’s a stunning moment, one that drains all hope from Eldrad.  So the writers needed two very different things from Eldrad, and achieved that by showing the different sides of his/her nature by literally splitting him/her into two different people.  Stephen Thorne would have been ill-suited to the first half of the story, and Judith Paris playing a shouty maniac would have been a stretch as well, so this is dealt with by regeneration.  It allows for some interesting contrasts: the ways in which the Doctor and Sarah react to the two versions of Eldrad, but more importantly the kind of person Eldrad becomes as a female character in contrast to a male character.  The Judith Paris version is specifically modelled on Sarah, and she gains more from her than her physical appearance.  Interestingly, when Eldrad regenerates he talks about his previous incarnation in terms of “a form that would be acceptable to the primitives of your planet”, and believes that he has “attained my true form at last”, as if the female version of himself was an aberration.  Sarah’s influence taught her to be something better, with at least some hints of emotions beyond anger and pride.  Once he is back to his “true form”, he is simply a generic male shouty alien, and is easily defeated, tripped up by a scarf.  It’s a suitably bathetic end to his story, the consequence of his rejection of the other side of his nature.

This all has the knock-on effect of making the first half of the story much more enjoyable than the scenes set on Kastria, but things are improving compared to the previous season.  An unfortunate theme of Season 13 was a change of location for the final episode of a story, always with the result of the plot fizzling out in a sort of anti-climactic coda.  This happened in Terror of the Zygons (the Skarasen attack), The Android Invasion (moving from the fake village to the real one), and the worst example was the much-loved Pyramids of Mars, where the story re-runs Death to the Daleks for an episode at the end.  The Hand of Fear shares the same kind of problem, but is much better integrated.  Inevitably, though, the Earth-based episodes with an actual intelligent villain are more effective.

What the female-Eldrad part of the story has that the male-Eldrad part lacks is humanity.  It’s not just that Eldrad is a more well-rounded character herself, but we also get another great guest character: Professor Watson.  He comes from the tradition of a base-under-siege Hobson or Dobson or Robson, but he actually makes us care, with that beautifully touching moment when he phones up his daughter and wife, thinking he is going to die.  Classic Doctor Who rarely does these quiet, emotional scenes, but when it does them, it does them well.

Any talk of emotional scenes must of course bring us onto the departure of Sarah Jane Smith.  Whether by accident or not, The Hand of Fear gives us a “best of” for Sarah: an alien stranded on Earth (The Time Warrior), a danger to rural England where the military are called in to fight back (UNIT stories, most recently The Seeds of Doom), a trip in the TARDIS to an alien planet, brainwashing, surviving death traps… it’s all present and correct.  And then we get that lovely final scene between the Doctor and Sarah, fittingly improvised by Tom Baker and Elisabeth Sladen.

It all feels a bit wrong at the same time, with the Doctor refusing to take Sarah to Gallifrey.  But for long-term viewers it probably makes a lot more sense.  Let’s think back to what happened the last time the Doctor set foot (unwillingly) on Gallifrey.  Specifically, let’s look at what happened to his companions, Jamie and Zoe.  They had their memories of the Doctor wiped from their minds, and were returned home.  For the Doctor, that must have seemed almost as bad as a companion dying.  He was dead to them, after all.  Faced with even the slightest possibility of that happening again, the Doctor had to send Sarah home.  He couldn’t let that happen again.  Not to his Sarah Jane.   RP 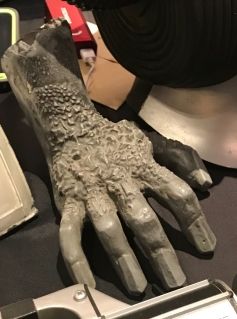 Photo taken at Regeneration Who 4

On a (rock and) roll with the classic horror movies tropes, Dr. Terror’s House of Horrors gets a turn in Doctor Who in The Hand of Fear.  The thing (no pun intended) was, we’ve seen dismembered hands racing about in many movies and shows.  Thing, from The Addams Family is just one example as was The Beast with Five Fingers (an idiotic title as all people have 5 fingers!  I recall a news broadcast that had the headline “Insane madman goes on rampage” and thought, yeah, you could have just said “madman”, the rest goes without saying!  I digress…)   The setup for this story is pretty fantastic.  After being caught in a rock quarry explosion, both the Doctor and Sarah escape pretty much unharmed with the exception that Sarah has developed a bit of an attachment to a hand (other than her own).  That hand goes on to move about and spends a brief spell living in a tupperware container before reconstituting as a female Kastrian who really just wants to go home.

Let’s take a trip forward some 40 odd years when Doctor Who would go through a major change: the Doctor is going to be played by a woman.  This lead to a lot of negativity from some.  Surely the Doctor was a man!  Frankly, it’s a brave move and I’m very hopeful about Jodie Whittaker’s casting, but this wasn’t the first time Doctor Who showed a gender change.  In 1976, Eldrad of Kastria went from a lovely green female rock monster to an ugly mustached male rock monster after taking a poison filled arrow to the heart.  (Don’t tell me that wasn’t a mustache!  What do you think, he was drinking chocolate rock milk?)  As the female there was something dangerous about her that was clever and devious but also possibly relatable.  I mean, that odd rock beehive was unbecoming, but maybe I’m just a sucker for green alien women.  (The Orions from Star Trek?  No?  Moving on…).   When she became a he, he was voiced by Stephen Thorne, who does megalomaniac so well.  He voiced Omega for the 10th anniversary special, The Three Doctors, and was every bit as convincingly dangerous in this story.    But it was rage, not deviousness, which motivated the male form, so it lost some of its menace.  Sure, he was still dangerous, but not in that subtle, sly-as-a-fox way we had seen with the female.  (Commentary, anyone?)

It’s pretty evident that there’s a whole undercurrent here about the dangers of nuclear energy, but it’s lost to our rock monster when she can absorb all of it.  She’d be a terrible guest to have over when you think about it.  The Doctor does bring her home for a brief stay as King of Nothing which is also ironic when you consider Omega (again, same voice … in male form anyway) also is left as king of nothing.  As irony goes, our Kastrian friend also brings together a couple other things.  Sorry, Things.  Yes, Thing from the Addams Family is a dismembered hand that moves of its own volition but also Thing from Fantastic Four is a rock monster.  Eldrad is a dismembered hand that becomes a fully formed rock monster.  I see a pattern!  I know, very human of me!

For me, having seen this story over two weeks, with two episodes per week, it hit so many great notes.  The first weekend was eerie and really well done, building intrigue every step of the way.  Sarah Jane’s “Eldrad mUst live” (capitalized for emphasis on her pronunciation) was magnificent, and slightly too happy (unless Eldrad also came with some candy because there was no reason to be that chipper anyway.  Rock candy, obviously).  Then week two came and so did the big hulking rock monster, with that voice, and the rage.  (I can’t fathom how it would be if I were Thorne’s kid.  Imagining not doing my homework suddenly becomes terrifying!)  The settings were wonderful for Doctor Who – an actually quarry not trying to be anything other than what it was, a nuclear power center which was actually a nuclear power center, and Kastria… which was, in fact, not actually another planet.

But then the ending came.  This was my first real departure in Doctor Who.  It wasn’t right!  Not Sarah Jane!  Not like this.  I had started the show with Sarah Jane; she was a part of the very infrastructure.  But that scene is wonderfully heartfelt and emotional.  You can feel the tears hiding behind your eyes (and some failing to hide in exactly the way kids fail to hide when they hide in plain sight.)  The Doctor tells her he received the call from Gallifrey (pronounced “Gallifree”) and can’t take her with him.  “As a Time Lord I must obey!”  …Um, since when?  When did he actually do anything they asked him?  Damn it, why listen now?!  So he drops Sarah off in Not-Croyden and she walks away whistling for a freeze frame ending.

You know, sometimes, when I’m melancholy and walking somewhere on my own, I still whistle that theme.  That tune stuck with me without ever knowing what it was.  Only today, as I write this, did I even think to look it up.  I don’t know how I feel that all these years, in times of melancholy, I was whistling “Daddy Wouldn’t Buy Me a Bow-Wow”!  I think I feel jilted.  In retrospect it seems it would have been better if Sarah Jane had something a little more “rock” in mind…   ML

Read next in the Junkyard… The Deadly Assassin

4 Responses to The Hand of Fear