The Talons of Weng-Chiang 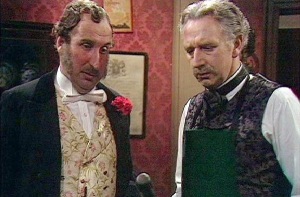 The Talons of Weng-Chiang is a fabulous Doctor Who story, brilliantly written, dark and scary, with some of the best acting performances in the whole of Doctor Who, and a double act that was memorable enough to justify 14 box sets from Big Finish of Jago & Litefoot, the very pinnacle of their entire output.

The Talons of Weng-Chiang is also screamingly racist.  This presents a problem for a Doctor Who fan, and the story reliably appears within the top 5 in polls, as if fandom is comprised of the three wise monkeys.  See no evil.  Hear no evil.  Speak no evil.  But Talons is over 40 years old, and writing about the Classic Series of Doctor Who is now not so far removed from looking at a snapshot of history.  Examine history while ignoring the context and you are doomed to misunderstand everything.  A recent edition of the quiz show Insert Name Here took a pop at this story.  Everyone laughed and moved on.  We don’t need to do that; we can look at the context.

When I wrote about The Celestial Toymaker I mentioned a near-contemporary television series called The Mind of J.G. Reeder, which actually sits neatly at the halfway point between Toymaker and Talons.  Barely a week goes by without some kind of a racist caricature.  That was normal television at the time, and Doctor Who was actually remarkably forward thinking for most of its run at providing some positive examples of the integration of racial minorities.  Talons is in a tiny minority, and that’s remarkable.  Bear in mind it was broadcast at a time where the Black and White Minstrel Show was still up and running (it didn’t end until 1978).  We were behind the times in that respect, and even more behind the times in terms of “yellowface”.  The extent to which Britain was out of step with some other countries can be demonstrated by two pieces of evidence:

The sad thing is, the problem with Talons could so easily have been ameliorated.  If only Chang wasn’t specifically defined as hailing from China, he would have fitted perfectly into the Victorian stage tradition of the yellowface magician.  That’s what the story is going for, but it gets fudged.  If Chang was a yellowface performer within the narrative of the story… well, it still wouldn’t be great, but at least there would be some kind of a defence to be mounted within the historical context of the setting, rather than just the historical context of British television in the 1970s, which was inherently casually racist.

As I mentioned above, Doctor Who rarely does this kind of thing, so why does it happen here?  Presumably for the same reason it is so violent, with Chang surviving dismembering, and taking drugs on-screen to dull the pain.  Presumably for the same reason this story features Doctor Who’s answer to a wet t-shirt competition.  Presumably for the same reason this example of a family show strongly references Jack the Ripper, with barely veiled hints about prostitution.  The team that had run Doctor Who for the last couple of years was being forcibly dismantled by their bosses at the BBC, and they were demob happy.  They were determined to go out on a high, and if they broke every rule in the book in the process (such as showing Chang going out on a high) then so what?  A producer who has been fired and is still making the show is a loose cannon.

Then we have Leela’s descent from Chris Boucher’s intelligent characterisation in The Robots of Death to Robert Holmes’s treatment of her as Eliza Doolittle.  Whilst I do believe this is a betrayal of the character, and a far less interesting thing to do with her than actually have her be brilliant because of her background, instincts and intelligence, I can see the point of it.  This is far more easily defensible than the yellowface.  While everyone points to Pygmalion here, there was actually a genuine confidence trick in Victorian Britain known as “drapery misses”, whereby a young woman in poverty was cleaned up, given a few lessons in how to act and speak like a society lady, and a wealthy gentleman was introduced to her by some means and then tricked into marrying her.  I have an article about that on my history blog.

Leela being encouraged by her betters to improve is pretty revolting, but it does have a point to it.  She simply will not be twisted in that way.  She is so much better and more resourceful than a drapery miss, and despite Holmes’s best attempts she won’t fit the Eliza straightjacket.  There is one lovely moment where she throws everything into reverse, with Litefoot instead adapting himself to her world, by eating with his bare hands.  It is probably little more than another attempt by Holmes to laugh at the savage, but it comes across as a glorious subversion.  I suspect it’s an accidental triumph.  After all, Holmes (Robert) writes a Holmes (Sherlock) story here, with the Doctor as Sherlock, but won’t allow Leela to be Watson.  He creates two Watsons, with Jago and Litefoot, and in doing so creates probably the most entertaining and skillfully acted guest characters in any Doctor Who story.

So I’ll end this by talking about them.  Let’s turn away from the issues associated with Talons and look instead to its legacy.  If you only ever take one recommendation from this blog, make it this one: head over to Big Finish and buy the first set of Jago & Litefoot, or put it on your Christmas list.  Then come back here and write in the comments section how much you loved it.  Christopher Benjamin and Trevor Baxter: true legends of Doctor Who.   RP

What’s the matter, Henry, you look like you’ve seen a ghost!  Is there something wrong with your broth?

Sorry, professor, I was just reminiscing.  Allowing the ol’ brain to bubble on bothersome thoughts, as it were.

Whatever could you be reminiscing about that would make you look so frightened over a simple broth?

I was vexed by that venomous villain and his peculiar puppet from Peking.

The very same!  I recall him mentioning some “broth of oblivion”!

Broth of…   Henry, how could Mrs. Hudson’s broth make you think of that scoundrel!?

That’s just it professor.  I was putting two and two together.  Think about it: Mrs. Hudson?

I think someone has pilfered parts of our particular lives, Professor.  Perhaps for some nefarious purpose, or possibly to parlay with us.

Henry, you’re speaking in riddles!  What are you implying?

Well, we’ve seen these peculiar penny dreadful’s popping up practically everywhere.  Think about it!  Sherlock Holmes?  He’s the very image of the Doctor; just as clever too.

I see what you mean!  And this Gaston Leroux and his Phantom of the Opera, complete with leather masked villain in a subterranean lair.  If I recall, Ms. Leela ripped off his mask just as the character does in the book.

Precisely my point professor!  The Doctor wore that Inverness cape and the deerstalker hat, too.  There was that vile vermin in the sewers.  And your housekeeper’s name is Mrs. Hudson!

You mean the giant rat of Sumatra, for which the world is not yet ready?  Good lord, you’re right, Henry!  I even recall the Doctor saying that very line to me: “elementary, my dear Litefoot!”  I recall it distinctly.

Perhaps it’s this preponderance of paper peddling penny dreadful’s that have hit the streets lately that got me meandering down memory lane, but this broth hasn’t hindered the hindsight.

I think you might want to avoid some of that sensational literature, Henry.  It’ll give you indigestion!

You don’t suppose the Doctor is sending us a message, do you?

What?!  However would he do that?

Well, what if he’s the author of these stories.  Seems like the sort of thing the clever clog might get up to!

Now that you mention it, old chap, you might be right.  Wasn’t that Dr Watson a medical practitioner formerly of the army?

You mean like you are a police pathologist, as I’ve heard you annunciate so eloquently?

And all these stories taking place in that thick London fog!  Just as we ventured through while helping the Doctor.

Good lord, Henry.  And what of this other fellow, Wells.  He’s written something about animals of gigantic size.  And a time machine!  Maybe you are onto something, Henry.  Why else would there be such a veritable cornucopia of these stories?  Even this film, this “Fiendish plot of Dr. Fu Manchu!”  It’s the very image of Li Sen Chang himself!

It’s is a shame that they don’t have actual Asian actors playing those parts, eh?  Seems a rum thing to do having all that make-up rather than hiring a talented fellow to portray the personality.  It’s probably a peculiar product of the time though, eh Professor?

What, you mean like having a chap named “John Bennett” play the fiend?  With the sheer volume of talented Asian actors, it does seem an unfortunate choice!   “Yellow face”, indeed!  Deplorable habit.

Well, the British people may be practically perfect but one cannot be expected to get everything right, can we?

No, Jago, we cannot.  Well, perhaps the Doctor is trying to get in touch with us through these novels and films!  What should we do about it?

Well, it may be nothing, I suppose.  It is possible that someone might just be imitating us!  It has been said that imitation is the sincerest form of flattery.  There’s no denying that we are classics in our own right, professor, if I do say so myself.  We two could go on to make our own series of stories; rivals for Holmes and Watson any day of the week.  Jago and Litefoot, forever!

Wait a moment, are you now saying that you don’t think there’s something queer going on?

Well, I never said that, Professor.  In fact, I’ve said time and again, that the day we met the Doctor was the last day our lives were ever normal.  Perhaps in some weird world, we were the works of fiction that borrowed from all of those other classics?  Where any Tom (Baker), Dick or Harry can play Sherlock Holmes in The Hound of the Baskervilles!  Why, if that were the case, our lives would be made up of enough classics to make us the biggest show in any theater!  Have you ever thought of that, Professor?  We could be rich!  The stars of the Palace Theater!

You know, Jago, that might just be the most preposterous rubbish I’ve heard in ages!  I think your broth did have a little something extra in it!  I’ll have words with Mrs. Hudson about that in the morning!

Sorry Professor!  Quite right.  I think I’ll finish this broth and head home!

A good idea Henry! And stay away from those accursed penny dreadful’s!  They’ll do your head in!

Read next in the Junkyard… Horror of Fang Rock

Author of windowsintohistory.wordpress.com Co-writer on junkyard.blog Editor of frontiersmenhistorian.info
View all posts by Roger Pocock →
This entry was posted in Doctor Who, Entertainment, Fourth Doctor, History, Reviews, Science Fiction, Television and tagged Jago and Litefoot, Leela, The Talons of Weng-Chiang, Tom Baker. Bookmark the permalink.

1 Response to The Talons of Weng-Chiang