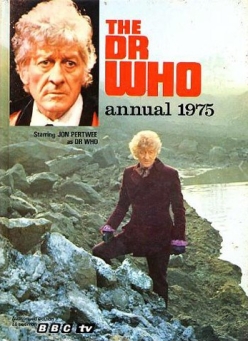 The Doctor Who annuals continued their slow decline in terms of the artwork, but the quality of the stories actually improved with the 1975 annual.  They are not quite so derivative of the television episodes, but more importantly the end of the Doctor’s exile to Earth is reflected in the annual, so gone (almost) are the endless reworkings of Season Seven stories, we are heading off into space, and also we are finally getting away from the 60s cliché of Dr Who vs Giant Insects.

The artwork really is becoming very poor by this point though.  The frontispiece says it all really.  Who is that mystery dark-haired lady in fab 70s gear with the Doctor, being menaced by Freudian tentacles?  She certainly bears no resemblance whatsoever to any television companion.  I suspect it was a bad drawing of Jo, with the hair painted a different colour to make her look more like Sarah.  And that brings us to a big problem the annual has with the companion.  Clearly most of this was written before Elisabeth Sladen debuted as Sarah, so Jo is the companion for most stories, with Sarah Jane popping up occasionally.  But there is no consistency.  It’s not as if we get all the Jo stories, and then a couple of Sarah Jane stories.  The annual switches back and forth, and the artwork is clearly all based on Jo even if Sarah is the companion.  As an example, look at the artwork on page 75, in the middle of a Sarah Jane story.  It is clearly based on exactly the same reference photo as the Doctor and Jo pose used as part of the comic strip on page 38.  There is also little attempt to characterise the two companions differently, apart from maybe the vaguest hint of Sarah and the Doctor’s relationship being slightly less friendly.  Some things really scream out in hindsight as wrong, similar to the annual range referring to the Doctor as “Dr Who” all the time (and there is still a little bit of that here), such as this quote from Scorched Earth:

Sarah Smith reserved comment as she looked out through the viewing screen.

So how about the stories?  Well, there are seven of them this time round, plus two comic strips and all the usual boring features, mainly lucky dips from the children’s encyclopedia focussing on space.  Although the rewriting of Season Seven stories has come to an end at last, the spectre of the season still hangs over the annual at the start, with this happening in The House that Jack Built (brilliant pop song, by the way):

Jo Grant sat watching the tall figure of the Doctor as he tinkered at one of the control panels of the Tardis console which she had helped him drag out of the police box a short while before.

Then Jo hits a switch by accident, or rather thinks she has, and the Doctor and Jo are off into another dimension, being forced to play games to recover the TARDIS.  Sound familiar?  With its deadly chess set, the story actually manages the feat of coming up with a more exciting game than the Celestial Toymaker ever could, and gives us an idea from Harry Potter and the Philosopher’s Stone a couple of decades early.   So is this actually a sequel to The Celestial Toymaker?  No, it’s a mashup between that story and The Green Death:

“Why have you brought us here?” asked the Doctor…
There was a low whirr as the computer digested the question, then a grating, inhuman voice replied, “It amuses me.”
The statement was so unexpected and short that the Doctor was momentarily lost for words. A computer that had developed a sense of amusement was something he had never encountered before in all his voyages through the fourth and fifth dimensions.

Well, he will soon!  Next up is Revenge of the Phantoms, in which the Doctor and Jo encounter a bodysnatching alien who looks, and is described, as something akin to an Enid Blyton-esque goblin.  In an example of the improvement in the standard of writing for this annual, there is some lovely descriptive prose in this story.  I’ll pull out some snatches here.  Enjoy the images this conjures up in the mind:

At the top of the slope they saw that the building was much larger than it had looked from the opposite side of the valley. It was made out of what seemed to be metal, dull and without lustre, and yet delicately shaded with demonic shapes. That anyone lived there seemed unlikely, that anyone should want to live there seemed impossible. The Doctor found a door and they went inside.

The moment they entered the building, Jo seemed to wake up. They were in a large empty room, and there were paintings on the wall showing various different life forms similar to the shadows Jo had observed in the mist…

Yet one thing remained constant in all the pictures – the look in the eyes. Though the size and shape differed from one creature to another, there was the same deathless stare, the same lunatic determination in them all.

The next story is The Time Thief, featuring the Doctor and Sarah.  A couple of things are striking about this story.  Firstly, it is very clearly utilising the post-Three Doctors continuity in a way that the series won’t bother with for quite a while.  The Doctor gets a call from a Time Lord called Karr, who asks for his help.  Secondly, it makes me wonder if the writers were told not to use the Master, because here we have what appears to be a workaround to that kind of restriction:

You remember the villain Madrigor, who disappeared without trace after his trial here; well he’s turned up again after all this time and you can be sure he hasn’t returned without a purpose… we want you to find out what that purpose is.

In the strikingly inventive and weird Fugitives from Chance, birdman aliens are capturing people from Earth’s history, including a pirate ship, and the side effect of their “transporter beams” is that some of them arrive transmogrified into metal, but still alive, including a golden pirate captain!  The Doctor is not pleased:

Why, you overgrown budgerigar, I’d like to wring your neck!

The Battle Within takes some inspiration from The Daemons (and it’s not the first time that has happened in the annual range), with the Doctor encountering demonic creatures who want to make him one of them, and needing the power of Jo’s mind to save him, willing the Doctor to live.

The creature was confused. He felt the strength of the intruder, felt the power of another from outside his experience.

Interestingly, annual stories over the years often focus on mental power of some kind, using a kind of magical version of futuristic science even more than the television series.

In Before the Legend, Season Seven refuses to completely lie down and die, with the Doctor and Sarah finding a race of aliens living on Earth with cavemen and finally concluding that they might still be living somewhere on the planet today.  There is obviously something about being amongst cavemen that brings out the worst violent tendencies in the Doctor:

The man with the club hesitated and, as he did, the Doctor lashed out with his fist, catching him in the solar plexus.

There are also two comic strips this year.  Dead on Arrival is absolutely magnificent, despite its very fat TARDIS with one big panel on each door.  Jo is involved in an accident with a gizmo machine thingy and wakes up without anyone able to see her, and the Doctor laying flowers on her coffin.  It’s a fascinating approach to an out-of-body experience, years before Torchwood gave us something very similar with Random Shoes, the second example of the annual being decades ahead of its time.  It is also the only appearance of the Brigadier in the annual, although it doesn’t look much like him.

The other strip is After the Revolution, set on the planet Freedonia (sound familar?), in which the Doctor and Jo are given a tour of an alien city and encounter a giant godzilla-like monster.  This is the kind of thing that makes the annual range such fun, the ability to do weird and wonderful stories that would have been impossible to achieve on television at the time.  As a bonus we also get Morbius pre-Morbius, with a talking brain in a machine.  Then again, maybe it’s Morphoton post-Morphoton rather than Morbius pre-Morbius.  That’s the trouble with the annuals.  You can never quite tell if they are years ahead of their time, or years behind.

I’ll leave you with Alan Price’s House that Jack Built.  It’ll be in your head all day, but you need this song in your life.   RP