Posted on October 13, 2018 by DrAcrossthePond

October is here again and I can’t ignore the creepy things I love to talk about.  For this Saturday, I wanted to give a different kind of game to the ones of the last few.  So I’m jumping into the scariest of the games for the month.  Darkwood, with it’s top down view, was not as scary as this, but it did offer its air of tension.  But Outlast…

I seriously debated about waiting on this game but there may not be a more horrific game to play for the month of Halloween.  To give context, I told my friend that I couldn’t play this game with the lights off.  (Oh, make no mistake, I tried, but the mouse is hard to control when your hand is sweaty and running from an enemy means you can’t allow your fingers to leave the keyboard.  This last aspect is impossible when you jump three feet in the air!)  He thought I was being a wimp.  I invited him over, turned the lights off in the computer room and closed the door, while my wife and I chatted amiably with his wife.  When the screams came from the room, I smiled.  Wimp, indeed! 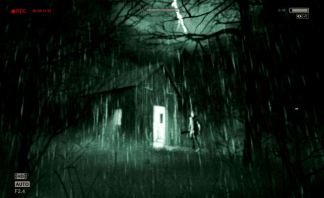 So the concept: you’re an investigative journalist and you’re doing some research into an old mental hospital.  What this means is, you’re not a fighter.  You’re not some lethal killing machine.  You’re a dude with a camera.  Thankfully it has night vision because, the lights in the asylum don’t all work.  And that would be alright if not for the fact that there are still people there.  And you’d better hope you can stay in the dark without being spotted.

Red Barrels released this game in 2013.  There has been one expansion and a sequel, neither of which I’ve played for one main reason: I want to have fewer grey hairs than my sister (who is 7 years younger than me).   I can’t hope to do that if I play this game any more.  That’s not to say I didn’t complete it.  Oh, I completed it.

When you’re walking through a pitch dark tunnel and all you have is a camera with night vision, there are two things to worry you: does the camera have enough battery to make it out at the other side of the tunnel, and is that something in the distance aware of you?  Because if it is, it’s probably going to give chase.  And it’s very hard to run while holding a camera.  Enter terror!

The game uses a first person perspective and the graphics are solid and do hold up well however it does have a fair amount of gore.  I don’t typically need that in a game, but when you select a game like this, you know what you’re getting into.  I can’t recall if the game has any vulgarity, but it did illicit plenty from me especially when being chased. Even when not being chased, it was tense!  Also, don’t get the wrong idea: the game is not all dark with this green hued night vision.  Although you almost wish it were!  It’s never very bright and those areas that are will make you wish for another dark area.

Sometimes getting through an area means edging along a precipice like Ian and the Doctor did in The Rescue.  Unfortunately, these areas have far more frightening things lurking around those corners than what the Doctor had to contend with.  (I mean, Koquillion?  Really??)

Sadly at the time I played it, I did not take screenshots, mostly because of the terror.  These images are all from the Steam page for the game.  The game itself is short.  It’s supposed to clock in around 5-6 hours.  My hour-count was a modicum higher; no doubt because I was hiding in a corner, being strategic.  Or whimpering.  It is surprisingly scary.  If you need a properly scary game to play in October, give Outlast a shot.  I have a feeling it will outlast you, but you may surprise me.  Or play the sequel and let me know how it compares.  Just pray that the people running this asylum don’t know you’re watching them.  ML

Like Loading...
This entry was posted in Doctor Who, Entertainment, Games, Random Chatter, Technology. Bookmark the permalink.