For the majority of their output, Studio Ghibli has had two main writer/directors: Hayao Miyazaki and Isao Takahata.  So far every film I have written about here has been a Miyazaki film, and I skipped Takahata’s first effort as it was not the kind of film I enjoy.  Having only recently caught up with Only Yesterday, Takahata’s 1991 effort, it turns out that Studio Ghibli had two complete geniuses as directors during their early years, not just one. 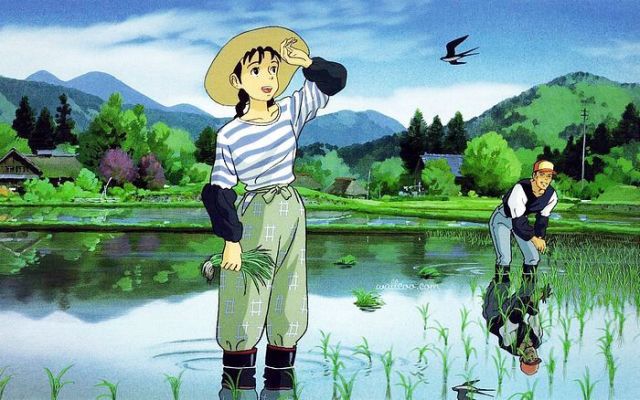 There’s a reason I came late to the party for Only Yesterday, and in fact most Ghibli fans will have been in the same boat, if you prefer to watch animes dubbed rather than with subtitles.  Remarkably, Only Yesterday was only given the Disney dub treatment for its 2016 DVD re-release.  If you are buying this take care to make sure you are buying the most recent release, because the DVD covers are almost identical.  So why did Disney take so long to get around to this one?  Well, it’s certainly nothing to do with the quality of the film.  Only Yesterday is a brilliant film, far superior to several Ghibli films that received the Disney dub treatment years ago.  There has never been any official word about this, but rumour has it that Disney were reluctant to dub the film because it has a sub-plot tackling the onset of menstruation in puberty.

You what? Bear in mind this is a film aimed at adults anyway, but even if it wasn’t this MUST not be a taboo subject.  Girls going through the same experiences simply cannot feel like they are unable to confide in somebody, or it is something to be ashamed of or never mentioned.

And Only Yesterday is a very, very important piece of work in this respect and deserves to reach a wider audience worldwide (and not just because of the public service it does by teaching girls that the best way to deal with being teased about their periods by boys is to hit them with mops).  It was hugely successful in Japan at the time of release, the highest grossing film in 1991.  Considering that it was attempting something quite untested, that was a major achievement: a realistic, slice-of-life drama, written for adults… but animated.

I mentioned previously that Studio Ghibli had been steadily working towards a style of storytelling that comes under the category “slice of life”.  A very simplistic way of summing that up is to say not much happens, but there is so much more to the genre than that.  The approach is to strip away traditional plotting, so no real antagonist or big dramatic moments, and instead focus on an individual life and significant moments that lead a person on a personal journey.  It’s a whole lot better than I’m making that sound, and as a viewer you really get involved in the life of the main character.

Taeko is a 27 year old, single woman, living in Tokyo.  Straight away you are probably thinking this is about a woman who has been left on the shelf, who needs to find a man, who is deeply unhappy with her life. No.  There is a romantic subplot, eventually, but there is something clever and different going on here.  In flashbacks to her childhood, we find out what really makes Taeko tick, and her life is simply not going to be defined by the same kind of existence her school friends have worked towards in life: a good life in the city, marriage, kids, job done.  That’s not what Taeko needs from life.

Taeko is an independent thinker, and that’s the key to her story and the key to the film.  Her heart belongs in the countryside.  She is not academic, but by an accident of fate seems to be a farm girl at heart, but is trapped in the city.  She is also creative and expressive, with a talent for acting.  The problem is, through the flashback sequences, we see how her love of the countryside and acting talents have been stomped all over by her parents.

I will go a lot further here than any assessment I have read of Only Yesterday and declare that Taeko’s father is a monster.  In one harrowing scene (the only such moment in the whole film) he slaps Taeko hard around the face because she leaves the house without shoes.  Everyone is horrified, even the father himself at his own actions, and he is never again physically violent.  But in terms of the impact on Taeko’s life that is far from being the worst thing he does.  Taeko is talent scouted for her acting abilities, and her father simply rules out the possibility of an acting career for her.  It is her one big talent, the thing she is desperate to do, and in one crushing moment over dinner he simply says no, that’s not going to happen.  And the thing is, his wife doesn’t get a say.  She does what she is told.  She gets the dinner when she is told to get the dinner, and plays the obedient little housewife.  She is as much a possession of the father as the chair he sits on.

I have seen many commenters saying “different culture” but I actually think it is the intention of the film to call that out, not to justify it.  Tradition should never be automatically more important than basic human kindness, and I don’t think that’s the point here.  So let’s not make excuses when we watch characters like Taeko’s father in films.  He’s a revolting failure of a human being, and to be honest I think that’s exactly what we are supposed to understand from the film.  We don’t even need to look for excuses for his actions.  He’s meant to be the barrier to Taeko’s hopes and dreams.

Her mother is not a lot better.  In one heartbreaking scene, Taeko overhears her saying she isn’t “normal”, simply because she did badly on a maths test.  Only Yesterday is such a powerful film because it strongly challenges the absurdity of imposing narrow values of “normality” on a child.  Astonishingly, Taeko never seems to bear a grudge against her parents.  She is better than that.

So Taeko has to find her place in the world as an adult, and clearly things are not quite right as they are.  Every year she travels out into the countryside to volunteer her help on a farm.  We are predictably into familiar Studio Ghibli territory at that point, with gorgeous animation.  The style of animation for the present day sequences are distinct from the flashback sequences, which utilise much more muted colours but are far from being dull.  In the present day, the colours are vivid and beautiful as we would expect from a Ghibli film.  In the past there is a different kind of brightness.  The sky is bleached white.  It is the bright days of childhood, but with the hyper-realism and faded detailing of a memory.  Anime is the place to look to see a flashback sequence achieved artistically and inventively.  Take a look at the series Hyouka for another stunning example of how to achieve that.

I won’t spoil the ending, but suffice to say it is a work of complete genius when the two strands of past and present start to interact, and the film becomes something very different in its closing moments, transcending the flashback approach.

And that Disney dub was worth waiting for in the end.  Daisy Ridley plays Taeko as an adult, Alison Fernandez does an amazing job as the young Taeko, and Dev Patel is great fun as Toshio.  If you’ve only ever watched the Miyazaki films from Ghibli, and frankly I can quite understand that based on Takahata’s Grave of the Fireflies, Pom Poko and My Neighbours the Yamadas, none of which I will be writing about on the blog, then you might be reluctant to give Only Yesterday a try.  But Takahata is a genius as well, and Only Yesterday is one of the most beautiful and powerful Ghibli films.  Don’t miss it.

To continue with my rankings, simply to help anyone trying to decide what to buy, here’s where we are so far, but again I must make it clear that there is a hair’s breadth between the utter and complete brilliance of my top 4.

I’ll leave you with the official trailer for the 2016 Disney dub release.   RP

Read next in the Junkyard… Porco Rosso

3 Responses to Only Yesterday