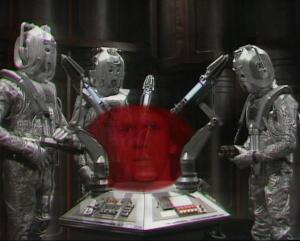 When I wrote about the Fourth Doctor cliffhanger endings, I mentioned how the variety and inventiveness of the cliffhangers had been a diminishing process since the 1960s.  That doesn’t just continue for the Fifth Doctor era, it falls off a cliff.  It’s as if we get to the Davison stories and somebody flicked a switch, because all of a sudden all the weakest kinds of cliffhanger endings are the ones that are the most commonly used, but we’ll get to that.  First of all let’s look at things in some kind of a logical order.

So we have found right from the start that there are, broadly speaking, three main categories of cliffhanger endings: the monster reveal, the Doctor or companion in danger, and the game changer.  The first of these virtually stops happening, although there are a few notable examples, including: the Cybermen in Earthshock (1), the Tractators in Frontios (2), the Magma Creature in The Caves of Androzani (2) and there are two interesting twists on this form of cliffhanger in Planet of Fire, with the Kamelion/Master at the end of the first episode and the miniMaster at the end of the third.  There is another Master reveal to be found in Time-Flight.

The Doctor/danger cliffhangers during the Davison era often take things a step further, with the Doctor apparently already dead.  As we know he can’t really die until the BBC announce it, these are much less effective than you would imagine:

The series virtually stops doing companion/danger cliffhangers during the Davison era.  Much like the monster reveals there are very few examples, but I’ll just mention one absolute corker: was there ever a more effective cliffhanger of this variety than Turlough committing suicide at the end of Part 3 of Enlightenment by jumping off a ship into space?  Strong stuff.

The game changer cliffhangers are again extremely rare, and lacking in variety, but we do get the ships in space in Enlightenment, a very Troughton-esque escalation of the threat level in Earthshock, when the whole Cyber army is revealed at the end of Part 3, and then in Frontios we get another Troughton-esque cliffhanger that brings back memories of The Mind Robber, with the TARDIS destroyed.  As cliffhangers go, they don’t get much bigger than that.  Kinda has a very effective mystery cliffhanger, with the opening of the box (Part 2).

So if all these traditional forms of cliffhangers are few and far between, what does the Davison era do instead?  Inexplicably, everyone goes really big with probably the weakest form of cliffhanger: somebody tells us the plot.  We have seen examples of this going right back to the Hartnell era, but it was quite clear from the start that it was by far the weakest way to end an episode.  Presumably the writers realised that too, because it is something we haven’t really seen much at all up until the 1980s, but take a look at the following examples.  Feel free to just glance down this list of tedium:

Admittedly, some of those are pretty effective, mainly when they are delivered with absolute conviction such as Hindle in Kinda, but too often they are dreadfully forced and clumsy in dramatic terms, such as “If you do it’s the end for us all!”, “On this ship we execute murderers,” and “it means the Master has finally defeated me.”  Predictably it is Davison delivering Robert Holmes’ lines that result in the best example of this kind of cliffhanger, with the following, probably the most dramatic plot summary ever in Doctor Who:

…unless, of course, I can find the antidote. I owe it to my friend to try because I got her into this. So you see, I’m not going to let you stop me now!

An offshoot of this is somebody gloating, normally the Master, who bids a fond “farewell forever” to the TARDIS in Castrovalva, and delivers an insult to the Doctor in The King’s Demons: “Oh, my dear Doctor, you have been naive.”

When words really can’t express what somebody has to say, perhaps a maniacal laugh will do.  We noticed a few of these creeping in during the Fourth Doctor era, and Wrack delivers a glorious example in Enlightenment, while telling us the plot.  And what other non-verbal way is there to end an episode?  Well, with a scream of course.  As if women’s lib is running in the reverse direction in Doctor Who, the Davison era gets more of these than ever before.  Todd gets one in Kinda, but most of the time it is Nyssa who is our resident screamer.  Some fine examples can be found in Snakedance (Parts 1 and 3) and Mawdryn Undead (Part 2).  Sometimes instead of a scream, the companion manages to get one word out: “Doctor!”  See The Visitation and Arc of Infinity for typical examples.

So all in all a massive downturn in the standard of the cliffhanger endings, with little in the way of new ideas and a strange focus on the weakest approaches.  Things had to get better from here, right?  We’ll find out soon, but prepare yourself for some closeup shots of Colin Baker’s worried face…   RP