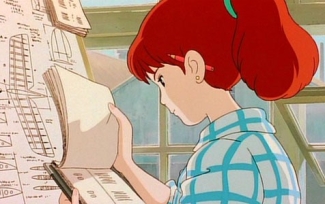 For the second week in a row, we are looking at a Studio Ghibli film that is generally underrated.  At least, it is probably underrated internationally, although it was the most successful film of 1992 in Japan.  I think the reason why it is less popular than most is that it really takes two viewings to appreciate the film.  Both my wife and myself had the same reaction: on first viewing we weren’t really keen on the film, but on subsequent viewings we have enjoyed it more and more.  That’s probably because there’s a lot going on, and not everything is made completely obvious.

Take the premise as an example: Porco Rosso is an Italian hero, who was a fighter pilot in the First World War.  Unlike most Ghibli films it is pretty easy to tie this one in to a real date and time, an actual point in history.  But Porco looks like a pig, due to some kind of a curse.  It is never made clear why that happened; we get no handy flashback sequence to guide the viewer by the hand.  We have to draw our own conclusions, and the one that works best is that he has brought the curse down on himself due to survivor’s guilt.  I have seen a theory that he only looks like a pig in his own mind, but that simply doesn’t fit with the reactions of other characters in the film.

Although we don’t get a flashback sequence of the curse actually being inflicted on Porco, we do see the probable cause in flashback, the moment when he survives a battle while his friends die, including his best friend, the late husband of his love interest in the film, Gina.  In one of the most beautiful and moving moments of the film, Porco (well, Marco as he is at the time) catches a glimpse of his friends heading off to the afterlife, their planes flying up to join a huge trail of aircraft heading towards heaven.

Porco survives, unlike his friends, but must live as a pig.  And everyone seems to accept him as that, and still consider him a hero.  Somehow everyone has got used to his appearance, and he has made a life for himself as a bounty hunter chasing air pirates in the Adriatic Sea.  That brings us on to the Mamma Aiuto gang, who bear more than a passing resemblance to the Dola gang in Laputa: Castle in the Sky.  In fact, their name means “Help, Mummy!” so their gang clearly has very maternal origins, although it lacks a female leader.  But they have respect for women, particularly Porco’s brave new friend Fio, which is what sets them apart from Porco’s main rival in the film, Curtis.

So when Porco needs to get a new plane he goes to see an old friend, who happens to have a daughter with a genius for aircraft design, Fio.  Porco has insufficient funds to cover the cost involvement, and added to his problems the Fascist military he deserted many years ago are trying to track him down, so Fio persuades him to allow her to accompany him back to his hideout, to make any necessary adjustments to the plane and make sure the debt gets repaid.  Fio is a very typical Miyazaki character, young, brave, resourceful and female.  Her father will look familiar to Ghibli fans who have seen Laputa or Spirited Away, because he is one of Miyazaki’s stock character types: the mustachioed engineer.

The main thrust of the film is the rivalry between Porco and Curtis, the latter being a play on film heroes such as Errol Flynn (and a sly nod to Ronald Reagan, with his designs on the presidency).  He is not a textbook villain: Miyazaki rarely goes in for those.  He is just a flawed character who “falls in love” far too easily and tries to fight for women as if they are objects.  So of course when he sees Porco with Fio he immediately wants to marry her (slightly creepily, as she’s only 17).  That brings us to the big moment of the film, where they take to the skies to fight, competing for Fio and the money to pay Porco’s debt to Fio’s father.

From then on the violence gets real.  To some extent it’s cartoon violence, but there is clear physical damage done so this is perhaps not a film for young children to watch.  Mostly it is played for laughs but despite that it is uncomfortable to watch, and I think it is supposed to be.  There is an interesting parallel between the dogfighting in the skies and the physical fight on the ground.  This is what fighting means, brought down to a very personal level.  It may look heroic when it is a battle between two planes, but lives are on the line in just the same way as if two men stand and punch each other almost to death.

And maybe, just maybe, the curse is lifted from Porco in the end.  It is never made obvious.  Again, this is not a film that leads the viewer by the hand.  But the clues are there.  In a fabulous bit of foreshadowing, Fio has a moment where she sees Porco with his human face earlier in the film.  It might be a fleeting moment but it is the difference between Fio and everyone else in the film (with the possible exception of Gina), the way they see Porco.  Fio truly understands the man hidden behind that porcine face, to the extent that she never fears him for a minute, even when he flies her to his very isolated hideout and points out that he is a known womanizer.  But look at Curtis’s reaction to Porco’s face, after Fio kisses him at the end of the film, and how Porco runs off, hiding his face.  The implication is clear enough.

So ultimately this is a film about redemption, and it is not a film that stands in judgement over anyone.  A story of heroism and guilt, told with intelligence and beauty.

My rankings so far, again simply to help anyone trying to decide what to buy, but the top 5 in particular are all completely magnificent.

Read next in the Junkyard… Ocean Waves