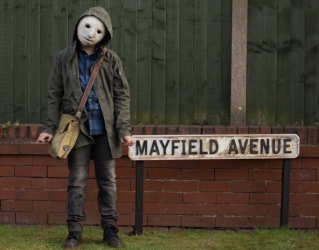 When I wrote about The Sarah Jane Adventures I mentioned the importance of the BBC in terms of making original drama content for children, and here is an example that is bang up to date.  There are very few broadcasters worldwide that are making quality genre television aimed at children, and certainly in the UK the BBC is the last bastion of this, with other channels spending little on original commissions and instead chosing to buy in a few kid’s series from abroad, generally just American cartoons.  But the BBC has a long and proud history of this kind of series, and it is still doing great things.

Like Doctor Who, Creeped Out bridges the gap between sci-fi and fantasy, but skews much closer to fantasy.  It is an anthology series, presumably taking inspiration from the old classics such as The Twilight Zone, but instead of a smoking man as the framing narrative it has the Curious.  Voiced by the singer Aurora, this strange masked child (or at least a child in stature) travels around the country observing strange occurrences and collecting souvenirs.  We only see him/her at the start of each episode, by way of introducing the plot, and at the end, when he/she collects a souvenir, something of significance to the story.

As for the stories themselves, there is a variety of different approaches, much like The Twilight Zone, but I would suggest that the overall hit rate is better.  Out of the thirteen episodes made so far only one or two fall a little flat, but all are watchable and entertaining at the very least.  The one that would probably appeal to Doctor Who fans the most is the very timey-wimey A Boy Called Red, about a child called Vincent who falls through a portal to 1985 and becomes friends with his own father.  His father remembers this in the present day and looks back with sadness on the day his best friend disappeared, something Vincent wants to correct, but to what extent can he exercise free will in this situation?  Is history fated to repeat itself?

Also on the sci-fi end of the scale (although it features a magic box with no technobabble explanation) is The Traveller, with two children taking full advantage of the ability to make time stand still for everyone else, a masterclass in getting actors to stand very still.  The moment the children realise somebody or something else is also able to move around in their world of frozen time is very creepy.

Most of the episodes lean much more towards fantasy than sci-fi.  Several of them are modern-day fairy tales, often with a moral to the story.  Probably the most frightening episode of the series is Trolled, in which a boy who trolls on the internet starts to turn into a literal troll.  His eventual fate is utterly horrendous and guaranteed to give children nightmares, but if it stops just one child viewer from misusing the internet in such a cruel way then it is well worth terrorising a generation!  Also concerned with modern life is Marti, which teaches about over-reliance on technology, with a living phone that takes control of a girl’s life.  It is a clever update of the well-worn sci-fi plot of an intelligent computer that wants power, which will be familiar to Doctor Who viewers from stories such as The War Machines and The Green Death.

Actions always have consequences in the anthology world of Creeped Out.  In Cat Food a child’s cheating is used against him.  Kindlesticks treads a familiar horror movie path, with a babysitter making up a scary story to frighten children so she can get them straight to bed instead of having to look after them, but invoking the name of her invented monster once too often.

The series ends with an impressive two-parter, with a boy trapped in a magic circus.  I haven’t mentioned every episode – go and enjoy them for yourself.  But I will say that my favourite by far is Bravery Badge, in which a girl guides camping trip takes a turn for the sinister when the children start being possessed by some kind of a mysterious force.  The revelation of what causes the possessions is gloriously icky.

Creeped Out premiered last Halloween.  The BBC has commissioned a second series for 2019.  Let’s hope they also continue to make plenty more good quality genre television programmes for children.  They remain, as they have always been, the best in the world at that.

If you want to track down and watch Creeped Out, the following is a list of the episodes so far, although there is no need to watch them in order (apart from the last two).

I would particularly recommend Trolled, A Boy Called Red, Bravery Badge, Kindlesticks and The Traveller.  RP