Top of the Docs: Season 9

Posted on November 6, 2018 by DrAcrossthePond

Within one single post, Roger proves that we don’t always agree! 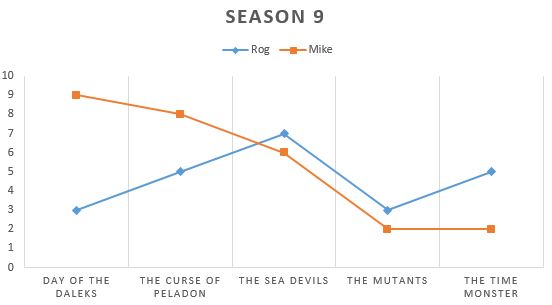 Day of the Daleks

RP: 3 – The Daleks were imposed on the writer, and then there were only three props available.  You can do a good story with only three Daleks, but an invasion isn’t one of them.

ML: 9 – Drastic difference, but I love the setting, love the pre-Terminator idea of creating the very future you’ve traveled back to stop, love the look of a Gold Dalek, love the idea of eating cheese and drinking wine in some dark house.  Only loses the top score of 10 because the Doctor guns down an Ogron in cold blood.  (Was it necessary?  I’d say not!)

The Curse of Peladon

RP: 5 – A parable for the joining of the EEC, done in the most cynical manner, doubled up with a nasty approach to religion vs science.  But if you can ignore all that (or it goes over the top of your head), then it’s all a bit of bizarre fun.

ML: 8 – Bad hair and a horribly cliched approach to King Peladon falling for Jo loses this story at least a point.  But having the Ice Warriors appear and not be the villain is a triumph.

RP: 7 – The original Master’s finest hour, and the Sea Devils work much better as a fairly straightforward monster than the Silurians did as a clumsy attempt at a three-dimensional villain.

ML: 6 – Pretty average story; decent pacing, great use of the Master.  Hilarious listening to the Sea Devils scream when land mines detonate in front of them, but again it dragged a bit and had another Scooby Doo ending.  Damn that pesky Doctor!

RP: 3 – The writers did a brilliant job with this, but everyone took their great scripts and did horrible things with them.  All substance, no style.

ML: 2 – Not memorable at all.  Cool idea with the three cycled development of a species, but somehow nothing in this story sticks.

RP: 5 – A lot of silly fun, with a story like something out of a Dr Who Annual.

ML: 2 – Great idea that goes nowhere.  Ignores that just a few seasons earlier we had an Atlantis story.  And drops to the point of idiocy the moment the Doctor builds that… thing!  “Here, let’s put a random assortment of kitchen utensils together with a bottle of wine and I can stop the Master’s time experiment!”  TEDIOUS!

Well, Rog and I have very different opinions of the first two of this season.  Again the pacing is stronger on the shorter episodes.  It’s harder to make the story interesting when there isn’t one.  Like pulling cotton apart, you can stretch it out, but when it gets so thin you can’t see it, does it matter?  ML

This entry was posted in Doctor Who, Entertainment, Random Chatter, Science Fiction, Top of the Docs. Bookmark the permalink.

1 Response to Top of the Docs: Season 9