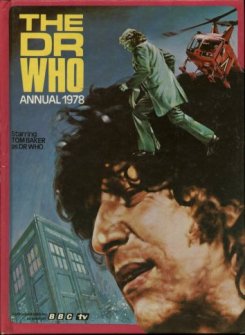 I described the 1977 Annual as the lowpoint of the annual range, and in terms of the artwork that is most certainly the case.  Surprisingly, they managed to find some more downhill for the stories.  For the 1978 Annual there are only four stories and two comic strips, with the rest of the annual made up of “features”.  We know what that means by now: lucky dips from the Children’s Encyclopedia, and a lot of them.  To give credit where credit’s due, there was much more of an attempt to tie the features in with Doctor Who, particularly the mathematical problems, which have a fictional element.  But the Dr Who Alphabet is a disappointment: Astronauts, Baily’s Beads, Cacus, Dancing Dervishes, Exploration, Femynye, Gorgon, etc.  Sadly nothing to do with Doctor Who.

All the stories feature the Fourth Doctor and Sarah Jane Smith.  At least, they feature Sarah in name.  None of the illustrations look anything like her whatsoever, as per the previous annuals, although the artwork for the Doctor is much better.  The annual must have seemed oddly out-of-date for children receiving it for Christmas 1977, with the last episode featuring Sarah Jane broadcast well over a year before.

The first story is The Sleeping Beast, and the premise will be familiar to readers of the previous couple of annuals.  For some reason, the stories got stuck in a rut in the mid-70s, with the Doctor returning to somewhere familiar to him, although unfamiliar to the readers, and generally meeting up with an old friend we have never heard of.  This happens in virtually every story in the 1978 Annual:

The Doctor had often thought back to that first meeting with Swee, a lively, likeable Guerner, with the disconcerting habit of twirling his eyes and stretching his flexible neck whenever he got excited.

That pretty much sets the tone of the stories: silly aliens with silly names.  The Guerners travel through space, moving from planet to planet.  The reason for this is rather odd:

The Guerners, unfortunately, had tremendous appetites. A single Guerner could eat an acre of Amazonian jungle into a dusty patch in little more than a day. They were vegetarians, but they were as ravenously hungry as a pack of Zimmerian wolves.

The Doctor arrives just in time to see the Guerners being attacked by a giant robot called the Sto-cat.  The story has a rather clever twist in the tale (or should I say twist in the tail?) concerning a famous monument on Earth, which might just wake up one day.  It’s a little bit Steven Moffatt.

The Sands of Tymus makes use of Sarah in a very traditional companion role: the kidnap victim.

Promax was the first to see Sarah, and as he did so, his face changed. ‘A female! Branxion, do you see that? It’s a female!’

Yes, it’s a female.  She is taken to their “workshop”, because she “will make the ideal subject for our female renewal programme.”  It’s not quite as dodgy as it sounds.  All their own females have died, and they want Sarah as a “template” to copy to make new “solar-powered forms” of themselves.  The problem with a lot of annual stories from around this time is that nothing really happens beyond captures and escapes.  The Doctor makes no difference to a lot of the societies he visits in the stories.  On this occasion Sarah gets copied and that’s it.  A bit of a non-story.

The first comic strip is The Rival Robots, which features another race of large-nosed aliens (see also The Sleeping Beast for one of those), and another old friend of the Doctor’s.  Just when you think the annuals have left behind the days of giant insects…

Good Grief! It’s some kind of a metal insect!

Sarah gets kidnapped again.  And “crash” is spelt “KRASSH”, just to get the point across.  I might start spelling words like that for emphasis as well.  Next time I write down a shopping list, I’m getting myself some KRISSSPS and some KRACKERRRS.

A New Life is a scarier story, with a nightmarish illustration that sets the tone: not-Sarah striking a catwalk pose in her catwalk outfit, in a desolate landscape, peering quizzically at a decayed corpse.  It sets up a theme of the next couple of stories: the Doctor landing somewhere completely hideous and deciding to explore anyway.  Here, they land on a world that “looks safe enough”, although the plants have nearly all been destroyed, the only sign of life is dead bodies, and the buildings crumble to the touch.  So they do the sensible thing and leave straight away of course…  No, actually they climb down a manhole, find an underground lake and a boat, go for a jolly trip around the lake in the boat, get attacked by a monster, saved by a tribe, and captured by the tribe.

The second and final comic strip is The Traitor, in which the Doctor and Sarah witness a spaceship crash and get involved in some kind of a very convoluted conflict.  The artwork is a confusing mess, which doesn’t help.  The idea behind the story is uncomfortably close to eugenics:

On our planet – Huricas – we are peaceful. Our physical state reflects our mental health. Our bodies are our psyche. Unfortunately, every so often we produce malformaties, savage murderers, whose evil is apparent in their appearance.

The final story picks up on that theme I mentioned above, of the Doctor taking leave of his senses entirely.  The Tardis has arrived on a planet and is surrounded by blank-faced people:

There were thousands and thousands of them, stretching as far as he could see. The Doctor turned a dial and the scanner moved slowly round. It was the same everywhere: faces pale and drawn, their eyes lying deep in their sockets, their mouths hanging open, swaying in a slow, jerky rhythm from side to side.

Who would get out of the Tardis to wander through this sea of zombies?  The Doctor and Sarah, of course!  Everyone seems to be in a kind of dreamlike state, and the reason for their predicament is quite an interesting one, which reflects our own concerns about overcrowding in our ever-expanding world population.

And that’s your lot, for 1978.  A couple of entertaining moments, but by and large some very derivative and repetitive stories, and not many of them either.  Had everyone stopped caring about the annual range, or was it the same problem as the television series was experiencing at the time: spiralling inflation causing financial issues?  Either way, the child of Christmas 1977 must have found their annual a dour affair, probably tossed aside rapidly in favour of some weebles or a Stretch Armstrong.  The crazy, fun and fabulous 60s Annuals never felt so distant.   RP