Posted on November 10, 2018 by DrAcrossthePond

Alright, well we’ve escaped Halloween with our skins intact. Thanksgiving is the next big holiday here in the good ol’ US of A, and things start to get a bit easier as the year winds to a close.  We kick back a bit more with a nice cup of tea and our feet up.  Now if only we had a nice, relaxing game to play!

What’s this?!  I say, that’s a jolly good looking game with British people.  What more could one want?  Unlike We Happy Few, these Brits don’t seem intent on killing one another, either.  But they do seem intent on that good old expansion policy that we’ve come to love. 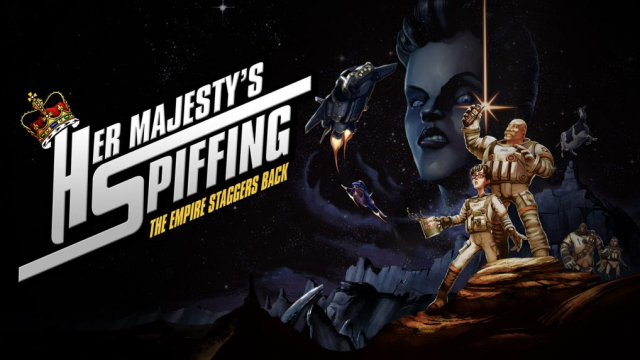 “It is the year near future…” starts the video welcoming the player to Her Majesty’s SPIFFING.  Why did I capitalize that word?  Because, old man, it’s an acronym, don’t’cha know?!  Special Planetary Investigative Force For Inhabiting New Galaxies.  Obviously!

Think The Hitchhikers Guide to the Galaxy meets dozens of other classic scifi ideas (and some not-so-scifi ones too).  He-Man, Back to the Future, Planet of the Apes and there’s no doubt where the game gets its logo from, is there?  Many of the “achievements” for the game are part of the experience; these exist in both PC and Xbox versions of the game, though I am strictly a PC gamer.  Bring me my detonators, for instance, grants an achievement with an artistic rendering of Alan Rickman, referencing Die Hard.  Some of the achievements caused me to laugh out loud, like the one for mixing “washing up liquid and tea”.  The game itself has a number of comical moments, but what I loved came from knowing the source material.  I imagine one plays a game like this because one knows the source material though, so there is that!

So the Queen, long may she live and send Brits into the cosmos, launches Big Ben (I always suspected…!) into space.  Big Ben is basically the rocket carrying the real deal: The Imperialise 2.  Just look at this spaceship of the future!  This ship, no, this work of art, has all the state of the art tech too.  Toasters that make toast for you… they have legs too!  Refrigerators!  Tea dispensers!  Where would we be with out tea dispensers, am I right?  Glorious!

Captain Frank Lee English and his partner need to find worlds to colonize.  (I chose that word with care.)  To do so means solving quirky puzzles, talking to one’s tea dispenser and encountering strange new life forms.  And your ship couldn’t feel more British either.  I mean, look at those glorious candle-lights on the wood paneled wall and the phonograph in the corner!!  The bear-skin rug might be a bit overkill, wot!  I say, Frank Lee English is a dashing sort, isn’t he? Bloody right, he is!  And that’s the character you’ll play, so get used to that image of sheer dashing brilliance!

British Decor; what every home needs!

The game is rated Pegi-3 which is basically E (for Everyone) here in the States, where we don’t have a Big Ben to launch!  Maybe I am jealous…  Technically, PEGI-3 really means children can play it from 3 years of age on, but I’d like to see a 3 year old figure out how to make tea.  Maybe in England; it’s part of the genetic make-up, but 3?!  I mean, don’t kids get burned?  But then in France, I think children are born with a pack of cigarettes in hand, so maybe in England they come with a mug?  What do I know?  I was born so long ago, the hospital looked suspiciously like an old castle.  I digress…

It’s not a hard game but it’s terribly fun to wander about your superb ship, talking to the toaster and the tea dispenser, as one does.  Typically I think a game should not cost more in dollars than it takes hours to play, but even doubling that might be acceptable when the game offers so much humor.  So a game that took me only 4 hours to complete at most should be $8.  Alas, this one is $12.  But what it loses in time to complete, it makes up for in jolly old British humor.  And I’m a huge fan of Easter Eggs so spotting the reference is a personal part of the fun.  It’s a lightweight game, but also perfectly acceptable for a quick dose of humor and puzzle solving.  And Britishness.  I say, wot, tally ho, jolly good, pip pip and all that.  Sorry… overloaded on Britishness.  Now I feel the need to make myself some tea…  ML

There’s something vaguely familiar about this…

Like Loading...
This entry was posted in Doctor Who, Entertainment, Games, Random Chatter, Technology. Bookmark the permalink.