Posted on November 17, 2018 by DrAcrossthePond

During October, I was reviewing games that tied in with that scary month of Halloween.  I was dying to review Call of Cthulhu, the new game by Cyanide studios, but it wasn’t even released until October 30th.  Having just completed it, I can share some thoughts on Lovecraft’s most popular tale, now in video game format.

A light in the darkness

Allow me to go in reverse order from my normal approach.  The company that released this, also gave us a wonderful, dark, stealth game called Styx.  Styx was a tremendously fun 3rd person game wherein you play as a goblin with some very dark proclivities!  Having played both Styx games, I felt confident that Call of Cthulhu was going to be amazing.  All evidence pointed to the developers understanding of the source material: it does not lend itself to action, favoring an RPG (role playing game) and walking simulator (exploring locales seeking clues).  Instead, it would be investigative, creepy, and psychological.  All of this sounded great, but, the game is retailing for $45; near the price of a triple-A title (typically $60).  I’ve said it before: I feel there should be a rough formula that balances cost to length.  I don’t feel it’s fair to pay $60 for a short game unless it’s a game that can be replayed many times with different outcomes.  When dealing with a story-driven game, that’s not often going to be the case.  With H.P. Lovecraft’s source material, how would this play out? 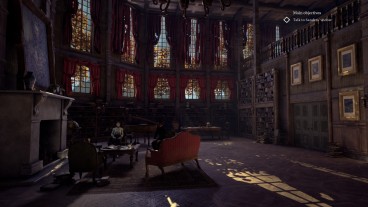 Some of the settings are beautiful and deserve a closer look.

Right from the start, it looked promising.  The story opens introducing us to our character, Edward Pierce; a detective with an alcohol problem.  Early on, he receives a phone call wherein someone asks for some information about himself, which allows the player to assign points in a number of categories.  So the role playing element is there: points can go toward psychology (understanding how people thing), strength, “spot the hidden” (which helps us find things that might otherwise be harder to find in a locale), and others.  What I may have missed is that two of the categories, Medicine and Occult, cannot be added to in game; they can only increase when finding relevant information so the one and only chance we have to spike these is during that call.  The others you can assign to your liking as you earn character points throughout the game.  Had I realized this, I would have spiked my points in Occult.  Also, strength has almost no role in the game and I could have allocated points better had I known that early on.

After assigning the points, the game can begin properly.  A mystery on a dark island: sounds perfect.  The visuals are good; the town was beautifully rendered but the movement felt blocky; this did not have the refined movements of most FPS games.  But my experience with Cyanide Studios was in 3rd person gaming, so I was willing to ignore that in favor of a good story, and as so much of the scenery was so artfully done, I could turn a blind eye to the movements.  But when the sound cut out on me during cutscenes and I only heard music, having to read the subtitles, that dropped more points from my assessment.  And the worst thing that happened really took me out of the game, literally.  During dialogue, a wheel pops up with different dialogue choices.  When I could not select anything, I exited the game.  I had to restart repeatedly to fix it.  When it happened a second time nearer the end, I looked online and found people playing on the PC had experienced this and fixed it by connecting a controller.  Luckily my kids had one and I was able to make the dialogue choice; what would have happened had I not had a controller?!  That was a major malfunction and really made me anxious to wrap the game up!  Typically, if one is loving a game, you really don’t want it to end.

The voice acting also isn’t to the highest quality and often sounded forced.  Characters lacked the natural sound when speaking and there would be frequent pauses between lines that gave the impression of someone reading a script.  How bad is all of this?  Depends on how you look at it.  I completed the game in 8 hours.  And I love the source material.  So I’m torn – if the price were around $20 for the game, I probably wouldn’t be bothered by the cheaper feel of it.  There are some truly great moments in the game such as wandering through an art gallery, being hunted by a Shambler.  It’s amazing and the solution to beating it was incredibly clever.  I almost looked up a walk-through but insisted that I should be able to think through the problems.  I was also fond of the games ability to make the player wonder if we had seen something we thought we had.  In one instance, I shot and killed a cultist (you only get a gun for a short time near the end of the game).  But when I walked up to the body, it wasn’t a cultist.  I started to wonder if that was my mistake or the game playing a trick on me!   But more of the negative asserted itself.  As the game progresses, some choices come with a note that says something like “this will affect the outcome of the game”.  The problem was that, at no point when the game was over, did I actually feel any of that mattered.  I was hoping for some kind of summary at the end showing how things impacted one another.  To make it even worse, the lack of the ability to save manually meant that we could not reload to try new things.   So the best one could do was reload the very last save to try a different ending.  About that…

I always try my true “gut feeling” ending first; sort of like saying “this is how I played the game all the way through”, then I go back and try alternate endings.  My “alternate ending” was very rewarding.  I almost wish that was the one I went with from the start.  It was brief, but I was very happy with the moment.  There’s also an after-credit scene depending on the ending but neither left me nearly as happy as that one pre-credit ending.

The end is in sight…

For all that, I did find the game enjoyable, but I can’t give it a high rating because it needed more polish or a much lower price tag.  That said, if it goes on sale, and you need a bit of Lovecraft to get you through the year, this one is miles ahead of that horrific Dark Corners of the Earth which preceded it.  One reviewer recently said Lovecraft’s works are obsolete and outdated.  I disagree.  It’s just that it’s not being used as effectively as it can be.  Having recently played Shadow of the Tomb Raider, there were multiple areas where finding a cult influence would have been exciting and neat.  Dead Space made no bones about Lovecraft’s influence and I think many games could benefit from adding the Mythos elements.  There’s still plenty of life in Lovecraft’s works, and this was no exception, it just failed to refine the game to the point of being the success I was hoping for!  Cthulhu Fhtagn.  ML