Posted on November 24, 2018 by DrAcrossthePond

Two weeks ago, a terrible thing happened: my hard drive crashed.  Dead, kaput, finito!  Now, this doesn’t stop me replaying any of dozens of great games because Steam, my game provider of choice, makes that super easy.  I select any of the 120+ that I’ve bought over the years, hit install and I can be right back in the game.  What I did lose is all the great screenshots I’ve taken over the last year, specifically for our website!  So I have no personal screenshots to share right now short of one game that I’m wrapping up.  But lately Roger’s been talking about “slice of life” dramas that he enjoys in his Studio Ghibli reviews and it keeps making me think of a game I’ve played.  Oxenfree.

Dialogue options on the way to the island.

Oxenfree is a tough game for me to talk about since I have not played it since 2016 and since then, more content has been released.  I’m tempted to go back to it after I complete my exploration of an ocean bottom but I already have 2 other games lined up…  But what makes Oxenfree stand out is that there’s a bit “slice of life” mixed with Netflix’s Stranger Things.  I have to start by pointing out Oxenfree is listed as a supernatural thriller and it is.  It shares a lot with Stranger Things: it takes a few regular people doing regular things and shows them stumbling into something weird.  As Alex, you bring your new step-brother to an island for an overnight party.  Things go wrong.  But a good deal of the game is not about what goes wrong.  It’s about exploring an island that is largely uninhabited for the night.  You travel with your friends, you have dialog options and you have radio.  When your radio starts picking up strange signals, you will wander the gorgeously illustrated island trying to piece together what is going on.  There are some surprise moments, but all-in-all, it’s a game that is accessible to most of the family.  Think PG-13 at worst.  (Or 80’s PG movie!)  And that’s part of the beauty of the game – it feels incredibly retro.  The radio is the most obvious throwback, using the old needle tuner but it adds to a sense of nostalgia.  And the artwork really deserves to be appreciated.  It’s largely a game that moves side to side like many old video games, but the artwork is exceptional.  Every scene is eye catching.

What is going on with this radio?

Another nice thing is that one of my chief complaints with games these days is that you’ll spend a lot of money and end up with a brief game that you walk away from thinking you didn’t get what you paid for.  Not so with Oxenfree.  Right now, it’s on Steam for $5.  I’ve gotten about 13 hours out of the game.  And it gets “overwhelmingly positive” reviews; deservedly so.  There’s subtlety in the game; it’s got a tension lurking just beneath the surface, but it never horrifies you.  You’ll get one  or two minor jumps but most of the game is carried by the anxiety of what might happen. 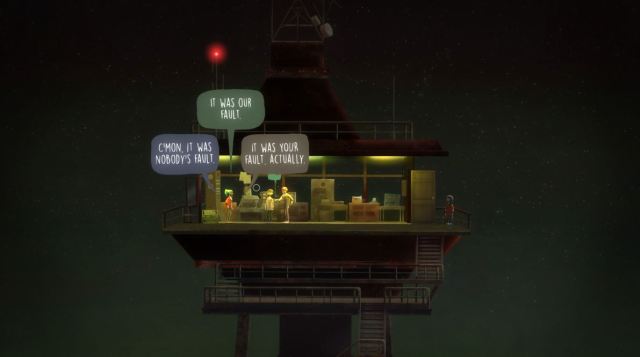 With multiple endings, the game does lend itself to replayability.  Is this going to be the big action game you save your money for?  Probably not.  But for an incredible story-driven game that keeps you wondering, give Oxenfree a shot.  You won’t be disappointed.  ML

This entry was posted in Doctor Who, Games, Random Chatter, Science Fiction, Technology. Bookmark the permalink.