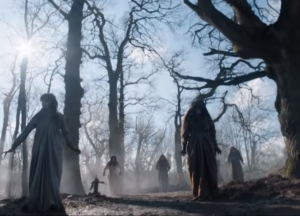 I suppose I could be boring and point out that there was only ever one “Witch-finder General” and he made the title up for himself.  Or that Matthew Hopkins was also the only “witch-finder” to test witches in water, and the practice was to establish if the water rejected them by making them float, a reference to baptism.  But none of that really matters.  When Doctor Who interacts with history Rosa is the exception and The Witchfinders is more what we have come to expect: history as seen through the lens of modern cultural interpretations.  It doesn’t quite go the full Crucible, although the source of Becka’s name is pretty obvious (see the excellent First Doctor novel The Witch Hunters for a straight up Doctor-Who-does-The-Crucible) but this is very much within the realms of what Elizabeth Sandifer called “heritage theme park Britain” on her excellent blog.  This is Doctor Who.  King James can wander around on his own, a humourous caricature of the real man, and nobody need notice what the Doctor and her companions are wearing either.  It’s not important.  The entertainment factor comes first, and in that respect The Witchfinders is the standout success of the series.

In any case, the true inspiration of this episode lies far from the actual history of this country.  It’s a horror story.  Actually, it’s a very specific horror story: The Ash-tree by M.R. James, and that’s exactly where I want to see Doctor Who getting its ideas.  Classic ghost stories are rich with creepy concepts that can translate to Doctor Who with a handwaved sci-fi explanation, and this is an example of how well that can work.  If you’re not familiar with the work of M.R. James then now’s the time of year to get familiar.  Apart from being great stories to read, five of his stories including The Ash-tree were adapted in the 70s as part of the Ghost Story for Christmas strand.  Between 2005 and 2013 four more James stories were adapted.  If you want to get a feel for the kind of storytelling playing into this episode of Doctor Who, and give yourself some scares in the process, they are a good place to start.

Being Doctor Who, we can’t just have the supernatural played straight, so instead we have alien mud, the second attempt to make the everyday frightening in Doctor Who this year.  Needless to say, it’s a much more effective idea than killer fabric.  The movement in Becka’s face after she went the full Morax was presumably achieved with CGI.  If so, it’s probably the most successful and genuinely creepy use of CGI in Doctor Who ever.  If the Morax reminded you a teensy bit of the Sycorax, that’s probably because it’s as close as Joy Wilkinson could get to the same name without re-using it, as it is probably a reference to the character from The Tempest, who punishes the spirit Ariel by imprisoning her in a pine tree.  It’s a shame the name had already been used really, as it fits better here!

Just to round off the chit-chat about the sources of inspiration behind this episode, I mentioned above how easily a supernatural story can become a Doctor Who episode with a bit of sci-fi technobabble.  That gets gloriously lampshaded towards the end of the episode with the reference to Clarke’s Third Law: “Any sufficiently advanced technology is indistinguishable from magic.”  It’s nice to have this actually mentioned in a Doctor Who episode because it has been the backbone of so much of Doctor Who, and the reason why I have so often described Who as a fantasy series with a flimsy veil of sci-fi.

So basically, yes, this was a fabulous episode.  We seem to be alternating between brilliant historical episodes and truly awful future sci-fi ones, with the occasional contemporary passable romp thrown in to the mix.  If only Chibnall’s version of Who could find the level of success in the future that it has in the past we would have something extraordinary on our hands.  But it’s not just the historical/horror aspects of this episode that worked so well.  At long last the characterisation of the Doctor really worked.  Too often this year she has been the weak Doctor who powerlessly watches as the innocent get killed and the villains walk away.  Not this time.  In The Witchfinders she is the Doctor who talks the talk about not meddling with history and then can’t help herself, diving into the water to try to save an innocent victim.

Wow, this season has been a tough one.  The Doctor and company are wonderful, but they get into these stories that feel like non-stop stuff.  Everything happens so fast, we barely have a chance to process what’s going on.  Then, quicker than you can say: “do not interfere with the fundamental fabric of history”, the Doctor is interfering with the fundamental fabric of history.  And why?  Because we’re dealing with an historical event that no one has heard about, which obviously makes it ok.

And that’s at the heart of the problem for Doctor Who: big historical events are “fixed points”.  Get to a lesser known event and it’s totally acceptable to mess with it.  But what constitutes a “big event” versus a “small” one?  Realistically the fire that burned down Rome was just a fire.  But it impacted a city!  Meanwhile Rosa Parks sitting on a bus seems so much smaller, what with it being a bus of only a few dozen people.  Yet, somehow the Doctor’s involvement with the fire was a part of established history while Rosa’s decision could have been altered.  It may have been considered too soon to have a situation where the Doctor influenced Rosa; it had to be shown that it was Rosa’s idea or it would have implied the idea came from another source and taken away her significance.  Fair enough, but should we Italians be annoyed that Nero was portrayed as a madman and the Doctor gave him the idea to burn down Rome?  Damn it, I think Nero could have come up with that idea on his own!!

From the outset, the Doctor tells her companions that they cannot interfere, but alien mud makes it where it is acceptable to interfere.  Yet again, we’re given some great material (not the mud, but the “undead”) only to make it some alien presence.  And what a lame bunch!  They wander about in all their Evil Dead glory, but the strongest is struggling to take hold of Mistress Savage.  Oh, wait, no – the strongest is the king who only can be a mud tendril.  Why is it that Savage comes out looking like a bad rendition of Star Fox but she’s not even the strongest?  Why wouldn’t Star Fox be the first of them?  And to defeat them… you take their prison, break it up, and make torches out of it?  At least I’m in familiar territory when I say, it doesn’t make any sense!?  And speaking of sense: the bad guys can be drained back into the earth/alien prison/tree but the strongest… explodes!?

That said, the cast is still spectacular.  The Doctor is absolutely a force to be reckoned with now.  I love that she stands her ground with Savage telling her that she is, without question, a murderer.  And the dialogue between her and King James was equally fantastic.

King James: “I want to know all the secrets of existence”
The Doctor: “Then start with the mysteries of the heart.”

The rest of Team Tardis is still spot on, although I don’t think letting Yaz go off on her own was very likely especially coming off Ryan’s comment last episode about that not being the way they roll.  But maybe we can accept that she was comfortable enough to go talk to a grieving young woman.  Graham again scores big with one great line after the other.  From his “Are you a good person, Mistress Savage”, to the hilarious “Revenge: that’s why the undead always come back!”, his delivery is perfect.  The Tarantino comment was just icing on the cake!  Ryan and King James have some great dialogue too, especially comparing back stories about those they’ve lost.

Which brings us to the guest cast.  Savage (Siobhan Finneran) is strangely more believable as a villain because she believes she’s doing good.  “Together we will save their souls… even if it means killing them all…”  It’s a terrifying sort of “big bad” and she carries it well.  By contrast King James (Alan Cumming) is the star of the piece.  He’s comical, intelligent, over-the-top flamboyant, and utterly wonderful.  As great lines go, “why does the lassie speak of commerce?” was a laugh-out-loud line, perfectly delivered.  He offers a comedic means of drawing attention to the plight of women back in the 17th century.  “A woman could never be the general!” and commenting on a female’s proclivity for “nosiness and gossip” are both delivered with a smile.  The time period gives credence to the lines, the science fiction allows us to create allegory.  And the Doctor’s comment about “if I were still a bloke…” actually makes sense here.

This would have been far stronger as a straight-up horror story, rather than adding an alien menace.  The messages could have been preserved without it: anti-bullying, love thy neighbor, poetry under pressure… there was no reason to add the “alien” especially when Clark’s law is referenced.  A horror story with a “sufficiently advanced technology” behind it would be indistinguishable from magic – in other words, we didn’t have to get an explanation!  Just Doctor Who vs The Evil Dead.  That would have been memorable enough.

We’ve got two more weeks to see if this season has any wow-moments.  So far, we haven’t quite hit that home run we’ve all been waiting for.  This one just felt like a foul ball to me.  ML

Read next in the Junkyard… It Takes You Away

6 Responses to The Witchfinders