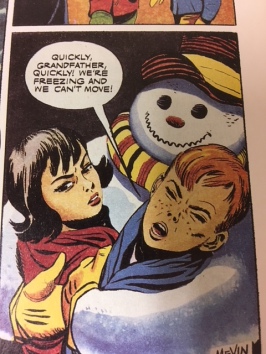 On Christmas Day 1965 there was more than one fourth-wall breaking Doctor Who story for children to enjoy.  If they were lucky enough to have a copy of TV Comic Issue 732 (dated week ending 25th December 1965) they could enjoy the first of a four-part Doctor Who comic strip: A Christmas Story.  It featured the First Doctor (well, Dr Who – there was no such thing as a “First” Doctor back then) and his grandchildren, John and Gillian, with artwork by Bill Mevin.

The story continued weekly until the 15th January 1966 issue, by which time the Christmas spirit was probably wearing a bit thin for the readers.  My own introduction to the story was in Classic Comics issue 15, from 15th January 1994.  This relatively short-lived range of magazines was published by the makers of Doctor Who Magazine and was fabulous, reprinting many comic strips from the very early days of Doctor Who, plus some strips from early issues of DWM.

Dr. Who and the two children have just emerged from the Tardis. They look at wonder at the scene that meets their gaze. The ground is covered with a carpet of snow and beyond in the clearing in which the Tardis has landed they see snow-topped pine trees – the scene is very picturesque. The children are delighted but Dr. Who looks somewhat puzzled.

So begins A Christmas Story, in a suitably festive manner.  When John asks Dr. Who where they are, the old man’s explanation makes about as much sense as his explanations for things on television, i.e. none at all:

Er… well… I’m not quite sure. I think this must be a new planet thrown out by one of the constellations.

A sleigh and reindeer emerge from the forest and take the Who family to the house of Santa Claus (49 years before eventually he shows up on TV in Last Christmas), who has decided to move house away from the North Pole, because of all those noisy “aircraft and things”. He has a backlog of toy production, mainly because of a huge stack of letters from children asking for “a thing called the Tardis”.  Bang goes the fourth wall, which seems to be a theme of Christmas 1965.

Luckily Dr Who has a magic box in his bag, which he can use to mass produce toys. His explanation is the usual nonsense, but what it does is ahead of its time, akin to a 3D printer.  John and Gillian become Santa’s elves for the day (although they don’t have to dress up), helping him to make toys.

Meanwhile Dr Who goes missing and the children find him in the company of a dangerous polar bear.  But that’s OK because Dr Who’s magic box has a “reduce button”.  So what we have here is basically a precursor to the sonic screwdriver (post-2005): a magic wand that can do just about anything to resolve the plot.

If you are getting the picture that this comic strip is ahead of its time, then you’re right.  There’s more…

Magician of the forest at your dis-service!

The “demon magician” who has been interfering with Santa’s work appears, and he has stolen Santa’s toys and built a wall around the Tardis, like a mischievous Donald Trump.  But just as the magic box can shrink things, it can also enlarge things (stop giggling at the back), and a squirrel is all the Who family need to give them a ride over the wall.

In another bit of incredible foreshadowing (or perhaps a certain future showrunner read this comic strip?) the Demon Magician animates a snowman, who grabs the children in an icy hug.  This is of course no problem for Magical Dr Who with his magical box, which can just fire a heat ray at the snowman.  I won’t spoil the very weird final battle with the Demon Magician, just in case anyone reading this has not yet enjoyed the comic strip and is able to track it down. 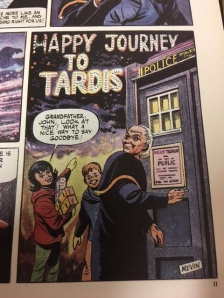 I suppose at the time this would have felt like a more childish version of Doctor Who.  But it was actually ahead of its time because Doctor Who during the Steven Moffat era finally shed the delusions of being anything other than childhood fantasy fiction.  In A Christmas Story, Dr Who is basically a magician with a magic wand, meeting Santa Claus and fighting a magical foe.  The veil of sci-fi falls away, and we get to the heart of what Doctor Who really is: fourth wall breaking magical fantasy.

2 Responses to A Christmas Story