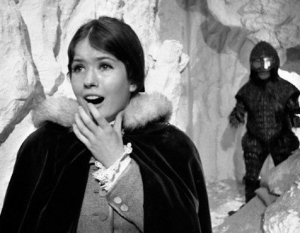 What kind of a companion was Victoria?  What traditional character trope did she fulfil?  There are a few different options.  Is she a damsel in distress?  A tragic heroine?  Neither of those quite fit.  No, Victoria is a woobie.

A what, you say?  (and yes, I realise plenty of readers will be familiar with the term, but for those who aren’t…)  Let me explain.  There is a military slang word for a poncho liner:  a “woobie”.  Where did the term come from?  Nobody is quite sure, but a strong candidate is the 1983 Michael Keaton movie Mr Mom.  The term doesn’t seem to have existed before that point.  In the film it refers to a child’s security blanket, and that’s how the word has also come to mean the following, as defined in Wiktionary:

A fictional character, usually physically attractive, who is put under constant stress and angst so as to create emotional attachment.

Sounds pretty accurate for Victoria, doesn’t it.  She is constantly menaced by monsters throughout Season 5, until it becomes too much for her and she decides to leave the Doctor.  And it wasn’t by accident, according to Deborah Watling in an interview for Doctor Who Magazine:

One thing we did slowly and consciously was traumatise Victoria up to the point she left.  I didn’t want her always to be screaming – I wanted her to be quite tough as well.  She had to be – anyone would – to be chased by all those monsters!

So can a character be “quite tough” and still a woobie?  Well, if nothing bothers her, she’s not a woobie, no, but that’s not the case with Victoria.  She has moments of bravery but “quite tough” is about as far as anyone would go in describing her character, I think.

The important thing about woobies is that their peril always comes from an external source.  Victoria isn’t a mad crusader, placing herself in danger.  She isn’t even one of those companions who goes off travelling with the Doctor for the fun of it.  She is orphaned, and the Doctor and Jamie are all she has.  Their dangerous lifestyle has an impact on her, but it’s not something she invites into her life.  She has a spot of bad luck as well, arriving just at the start of a run of adventures that are nearly all monster-of-the-week encounters.  There’s always a creepy alien wanting to menace Victoria.

But what’s the point of all this?  Why have a character who seemingly exists to have torture heaped upon them?  To understand why, we have to look at it in reverse, from the point of view of what the writer is trying to achieve with the monsters.  An Ice Warrior might be frightening, but an Ice Warrior that is menacing the woobie suddenly looks really, really mean and scary and evil.  The more we love the woobie, the more we hate the villain who is menacing her.

You can only go so far with this, as a writer.  Too much of it, and the viewers will become immune to the effects.  If the woobie is always frightened, it’s just a normal episode, but used sparingly it can be a very effective writer’s tool.  One could argue that the problem with Victoria’s season of Doctor Who is that the woobie imperiling was overcooked.

Moments like the one in The Tomb of the Cybermen where the Doctor has a heart to heart with Victoria help to balance that out.  She never exists solely to be menaced.  There’s more to Victoria than that, and indeed in the same story she wields a gun against Kaftan, and manages the extraordinary feat of shooting a Cybermat with it; extraordinary because it’s a small, moving target, and she has presumably never fired a gun before.  So that’s when the woobie becomes a truly effective character: moments of brilliance, moments of happiness, but lots and lots of danger.

The end point for a woobie is important.  If they get killed off then the whole thing can feel like an exercise in sadism, tainting the whole story arc.  Those kinds of woobies are best reserved for more adult dramas.  As for Victoria, our woobie has a happy ending, making her one of the few Classic Series companions to have a story arc of sorts.  She needed a family, and initially found one with Jamie and the Doctor, but she couldn’t be part of their family without being the woobie.  Eventually she finds a new family, one where she can be at peace with the world and a woobie no more.   RP

Co-writer on junkyard.blog. Author of windowsintohistory.wordpress.com. Editor of frontiersmenhistorian.info
View all posts by Roger Pocock →
This entry was posted in Companion Tropes, Doctor Who, Entertainment, Science Fiction, Television and tagged Victoria, Woobie. Bookmark the permalink.

1 Response to Victoria the Woobie