The 1980 Doctor Who Annual offers slim pickings once again to fans of Doctor Who fiction, with only five stories and two comic strips.  On the plus side, it’s the first annual for many years to feature recognisable artwork for the companion, in this instance the first Romana.  Having said that, we start with a dodgy attempt: 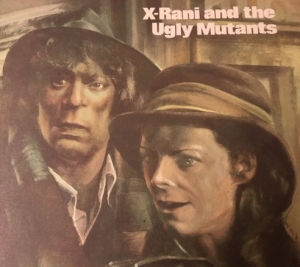 What’s that part of the face called between the top lip and the nose, trivia fans?  Ah yes, the philtrum.  I’m pretty sure Tom Baker’s isn’t the same size as his nose.  Oh, and what’s Lieutenant Columbo doing on page 14?

X-Rani and the Ugly Mutants (no, not that Rani), features the discriminatory Doctor we know and don’t love from the Fourth Doctor annual range:

“Devoid of life, were you about to say?”
“Life as they know it on Earth,” replied the Doctor, deftly changing his tune. “Though I must say it’s quite similar to the human form, apart from its gross misshapenness. Let’s see if it’s friendly.”

So that’ll be a lesson for the child of 1979 in how to be revolted by anyone they don’t see as “normal” then.  The Doctor and Romana find one, solitary spectator watching a crowd of mutants fighting for her amusement.  She is the titular X-Rani and she has caused the mutations.  Inflicting the same thing on the Doctor, she agrees to reverse it on condition that he takes her in the TARDIS to the sister planet Yethra, for some convoluted reason that’s not really worth talking about.

In Light Fantastic, the Doctor is sent on a “special assignment” to investigate some disappearances on the planet UX80.  The story contains such scintillating dialogue as this:

How exciting!  The story is actually quite an interesting one, as it concerns a renegade Time Lord named Radik, who was “thrown out of Academy for unpermitted experimentation in the field of radiation” and stole a TARDIS.

The comic strip Terror on Xaboi is all about some alien cavemen who are being menaced by a giant beast who bears more than a passing resemblance to King Kong.  The Doctor solves their problem for them by getting a big gun out of the TARDIS and killing the “beast”.  I suppose if he’s going to be a xenophobic Doctor he might as well be a murderer as well.

“Killing it doesn’t seem like the answer to the problem, but what else could I do?”

…well, not kill it, perhaps?

Reluctant Warriors is another noteworthy story, as it seems to almost have the same idea as Vengeance on Varos, a few years early.  The Doctor and Romana find people gathered around large screens set into walls, to watch battles to the death and bet on the results.  According to the rather alarming illustration on page 33 they seem to fight naked. 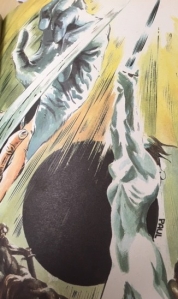 What would Lieutenant Columbo think of that?

The premise of the story is that a man named Leondin, who “was campaigning for more leisure and shorter working hours”, was elected because “people were fooled by his persuasive talk”.

“Soon the whole city seemed to think of nothing but pleasure, and Leondin provided more and more sophisticated entertainments to keep them happy in their long hours of leisure.”

“Surely there must be some sensible people left,” said Romana.

So there’s maybe a whiff of the author’s own politics there.  Charitably we could say that the story is ahead of its time, due to the similarities with Vengeance on Varos, but on the other hand the inspiration is probably rather more prosaic than some kind of prediction of reality television: the Roman Empire.

The weakest story of the annual is the comic strip The Weapon, which takes place at some unspecified time on Earth in the past.  The Doctor and Romana get involved in a conflict between white horsemen and black horsemen.  Not a lot is achieved one way or another, other than K9 shooting somebody. 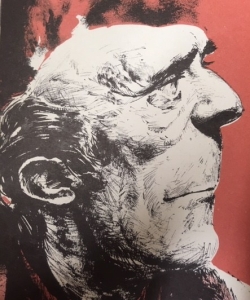 After a decade and a half of Doctor Who annuals, the writers were still obsessed with the letter Z:

A figure at one of these controls swiveled round in his seat. Romana recognised him as Zaniel, the one of the Zedons referred to as Zani.

Aside from that, it’s a run of the mill alien invasion, aided by a collaborator.  The invaders’ appearance is rather unfortunate. 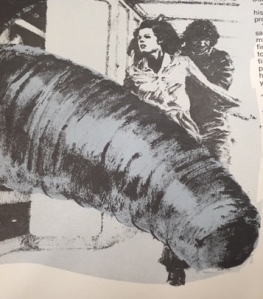 …and you thought Erato was bad.  What would Lieutenant Columbo think of that?

The Sleeping Guardians seems at first to be a re-run of The Ark in Space, with the Doctor and Romana discovering rows and rows of glass boxes filled with people, until K9 confirms that they are in fact robots.  The adventure takes place on the planet Valeria, which is under attack from forces from the dark side of the planet.  There are ten thousand robotic warriors ready to fight the war for them, but they are behind a great door, and nobody can find the key, despite centuries of searching.  K9 finds it just by chance within minutes.  Maybe Columbo helped him out.   RP